Antoni Porowski’s New Restaurant Satisfies Anyone on a Specialty Diet 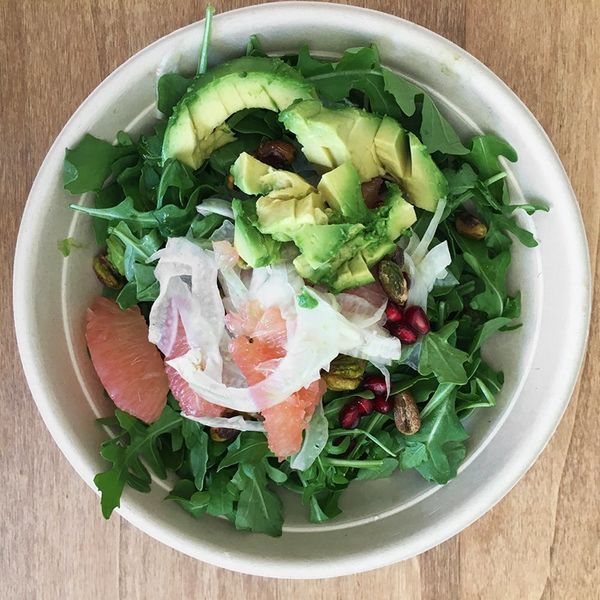 Before you subject your tastebuds to the weird and wonderful new foods and drinks going viral on Instagram, check out Brit + Co’s reviews on First Bite, our new series where we tell you if they are truly snack-tastic or totally terrible.

When Antoni Porowski opened his fast-casual restaurant Village Den in NYC’s West Village, we jumped at the chance to try it. We also had so many questions: like, would every dish have avocados? Is the Queer Eye star’s food actually delicious? And if we become a Village Den regular, would we become besties with him? In short, no, absolutely, and unlikely. But that’s just the abbreviated version. Read on to discover our whole experience.

Even on odd hours in the middle of the week, this new eatery, which opened in early October of this year, is buzzing. The vibe is bright with a lot of natural light, exposed wood, communal tables, cushy blue booths, and greenery that hangs as far as the eye can see. There’s trendy signage everywhere like the black block letters on the storefront that read, “Better Den You Remember.” The pun nods to the New York City landmark by the same name that Porowski and his co-founders Lisle Richards and Eric Marx took over. Walking in you’d never know that the restaurant used to be a 36-year-old diner, and the only aspect that remains from the makeover is its name. Which is kind of how Queer Eye makeovers work if you think about it…

Ordering at the counter, you’ll feel as if you’re inside a chic deli. Everything is organic, made fresh daily, and gluten-, soy-, and red-meat-free. As promised by the sign outside that reads “at the corner of vegan and paleo,” the menu board is adorned with symbols that point out which dishes are compliant with various diets, including keto and Whole30. “We just wanted it to be representative of how New Yorkers eat. We wanted a menu that’s healthy and tastes good,” explains Richards. Similar to a deli, you also can order the food in large portions so you have it for the week or even to cater a dinner party.

Porowski developed the menu. “He wasn’t just involved; this is his menu. He developed every recipe, and we communicate daily about future menu changes,” assures Richards. On it, you’ll find coffee, salads, smoothies, and bowls. The restaurant also has breakfast with options like an oven-baked frittata, avocado tartine, and breakfast bowl with poached eggs and sweet potato hash browns.

This might be a hot take, but Village Den has best cold brew coffee we’ve ever tasted in New York City. And we’re only a little swayed by the brew’s adorable “stone cold” plastic cup. Get it? Because it’s a cold brew, and if you’re anything like us, you’re likely a little unapproachable before caffeine.

For a light lunch, go for Porowski’s personal favorite on the menu, the Silician C Bomb Salad. This bright and colorful bed of arugula is topped with pomegranate, grapefruit wedges, delicately sliced fennel, salty pistachio nuts, and a generous hunk of avocado (obviously). It’s drizzled with a subtle lemon and oil dressing that perfectly complements all of the salad’s elements.

At the heart of Porowski’s menu is the TV Dinner. This is not the weird frozen food you may have had as a kid. The menu even jokes these are “not the sad kind.” You get to pick a protein and two sides. We chose the apple glazed turkey meatloaf with a side of roasted broccolini and garlic and sweet potato wedges.

Since the entire menu is gluten-free, there’s no filler like breadcrumbs in the meatloaf. It’s simply organic ground turkey, carrots, celery, and onions. Despite its simple ingredients, it’s moist, flavor-packed, and filling. The apple glaze delivers just the amount of sweetness to the dish without being too overpowering. The sweet potato wedges and broccolini complement this dish well, making this meal incredibly satisfying and also easy to take home to reheat later.

The Village Den delivers on all fronts: beautiful interiors, versatile menu, and fast service. It reminds us of Sweetgreen but with so many more options for specialty diets. We really hope that Village Den opens more locations, but we’re not holding our breath. “Right now we’re just focused on this location and building a community that’s around this place,” Richards says. “If it expands, then great. Time shall tell, and we shall see.”

Would you eat at The Village Den the next time you’re in New York City? Let us know on Twitter.

Gabi Conti
Gabi Conti has two passions in life: food, and dating. She went on 10K hours of dates in her 20s and is sharing her knowledge in her first book 20 Guys You Date In Your 20s, which drops with Chronicle in the spring of 2020. Gabi is a writer and host, who currently hosts and writes a weekly entertainment show Hollywire Vlogs, she wrote and hosted 423 episodes the Elite Daily Show for Verison’s go90 and Elite Daily. She has contributed dating and wellness articles to Cosmopolitan, Hello Giggles, POPSUGAR, mindbodygreen, and Elite Daily. You can follow her on Instagram @ItsGabiConti.
First Bite
Food News
First Bite
The Conversation
Reviews:
More From Food News