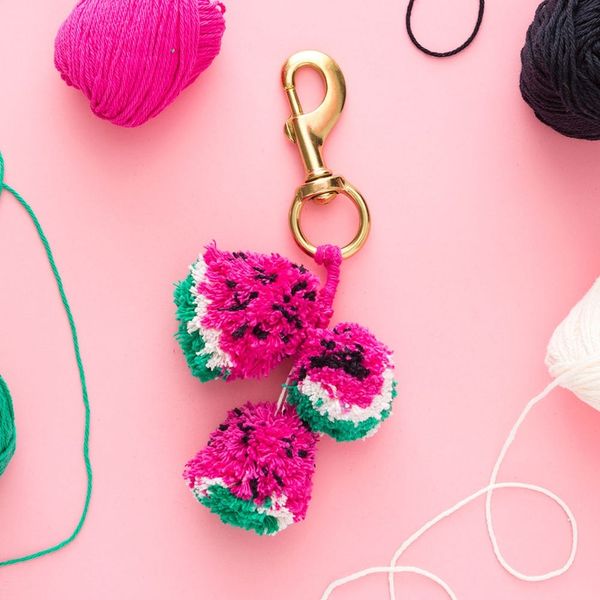 1. Wrap half of the pom pom maker with pink yarn and a few bits of black yarn.

3. Make a knot in the middle of the pom pom maker with some leftover yarn. When you tie the knot, be sure to keep the pink and black side on top. This way, the green rind side will be on the bottom and the melon seed side will be on top. Let the ends of the yarn hang loose and long. Make the knot really tight!

4. Remove the pom pom from the pom pom maker. Trim your pom pom to a tight little ball or into a pyramid shape. Keep the two long ends untrimmed.

5. Tie the untrimmed pieces of yarn around the key ring. Make a bunch of watermelon poms or let one hang solo.

Tie the untrimmed pieces of yarn around the key ring.

What a cutie patootie.

What watermelon DIYs have you tried? Share your photos with us on Instagram using the hashtag #iamcreative and tag @BritandCo. Need even more summer inspiration? Head to Pinterest STAT.

Irene Lee
Irene loves all things DIY, especially if the project involves confetti. She strives to make beautiful things that anyone can enjoy. If she's not immersed in crafting she's probably giggling over an insta-famous corgi or frolicking around Disneyland.
DIY
DIY Style
DIY Easy DIYs watermelon diy keychain diy