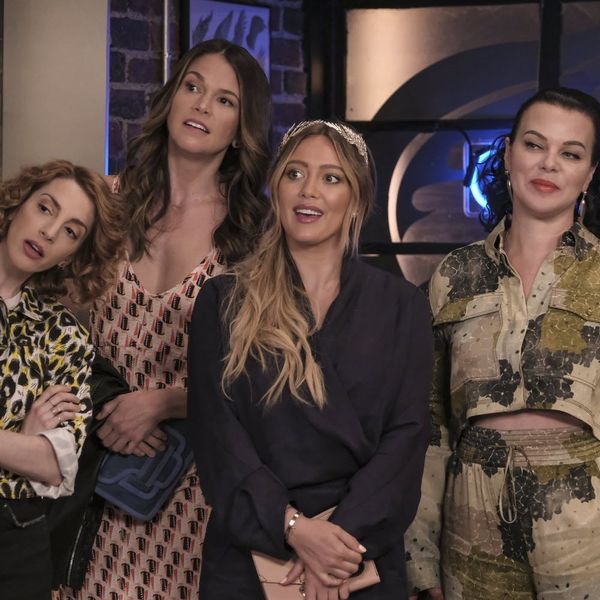 Welcome to Brit + Co’s Weekly Entertainment Planner! Each Monday, we highlight one thing we’re excited about in six categories — movies, TV, music, streaming services, podcasts, and a bonus pick from all of the above — to help you navigate your week in watching and listening. Check out our picks for the week of August 27 to September 2 below. Your eyes and your ears will thank us!

Destination Wedding (August 31): Thanks to Netflix and Crazy Rich Asians, rom-coms are making a comeback in 2018. The latest one that has our attention is Destination Wedding. It stars Keanu Reeves and Winona Ryder (who revealed while doing press for the movie that they might actually be married?!) as two strangers who meet and commiserate at a mutual friend’s wedding. But, really, it had us at, “Keanu Reeves and Winona Ryder.” Check it out in theaters on August 31. (Photo via Robb Rosenfeld/Regatta)

Younger (August 28): The emotional moment between Liza and Kelsey in the penultimate episode of Younger season 5 had us sobbing last week, and the finale will no doubt leave us even more emotionally wrecked. Is Liza really leaving Millennial?! Tune in on Tuesday, August 28, on TV Land to find out. And to cry. Did we mention the crying? (Photo courtesy of TV Land)

Ozark season 2 (August 31): The dark, slow, and dreary world of this Netflix show might not scream “end of summer,” but think of it as the perfect show to transition you into fall. Check out season 2 when it arrives on Netflix on Friday, August 31. (Photo via Netflix)

Rise by Rachel Hollis: The motivating real-talk of the Girl, Wash Your Face author is always a welcome inspiration, and now you can have it in podcast form. Hollis has been dishing out her tangible productivity takeaways for life every week for just over a year now, so subscribe wherever you get your podcasts for new episodes every week (plus a healthy back catalog to binge when you need a pick-me-up).

Troye Sivan, Bloom (August 31): The one-time YouTube star — now a mainstream pop phenomenon — releases his sophomore album Bloom on Friday, August 31. Hits like “Dance to This,” featuring Ariana Grande, have taken top spots in all of our playlists this summer, so we already know we’re going to love it. (Photo via Rich Polk/Getty Images for Capitol Music Group)

Jack Ryan (August 31): John Krasinski will take his turn playing best-selling author Tom Clancy’s beloved CIA agent Jack Ryan in Amazon’s latest series, which makes its long-awaited debut on August 31. Alec Baldwin, Harrison Ford, Ben Affleck, and Chris Pine have all played the character on the big screen, and from the looks of the new big-budget, eight-episode series, the A Quiet Place actor is more than ready to join their ranks as an action star. (Photo via Amazon Prime Video)