The 20 Weirdest Sexy Halloween Costumes Ever 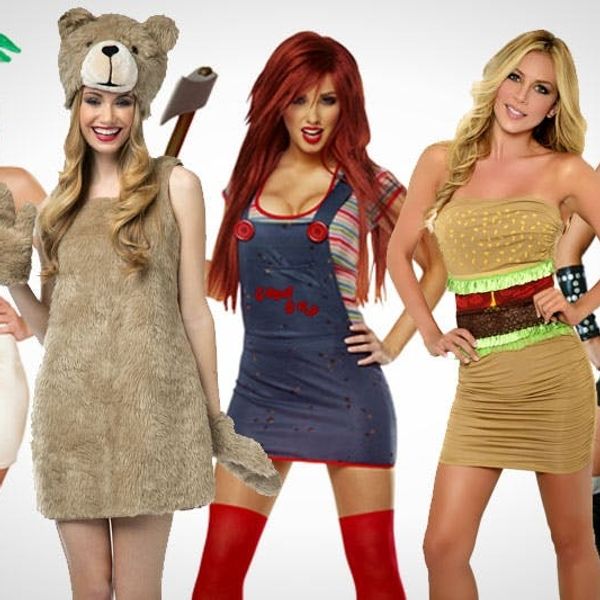 It’s Friday, which means it’s time to get weird. For our next foray into halloween costumes, we’re going all the way to the dark side. You know the big joke about how Halloween is every chick’s excuse for dressing on the more scandalous side? The costume market has capitalized on this trend, and things have gotten really weird.

Presenting our roundup of the 20 weirdest “sexy” Halloween costumes ever. And guess what? You can buy ALL of these. Time to stock up on sexiness! ;)

1. Sexy Hamburger ($40): First up, the costume that inspired this entire roundup. Our favorite part is the sheer “meat” section right at the midriff.

2. Hamburger Thief ($50): What good is a hamburger without a hamburger thief? If a pair of people dressed up as this and the hamburger, they would probably win at life.

Leonardo ($25): As it turns out, these pizza-loving turtles are one of the most popular costumes ever, and remain relevant even though they haven’t been around for maybe 20 years? Anyway, the sexy,er, sassy (?) take on the turtles is a little too shiny.

Ted where he imitates Hootie and the Blowfish (and all ’90s bands) is hilarious. Second, this costume is really, really weird.

Do you want fries with that?

10. Sexy SpongeBob ($58): This is wrong. It’s like Britney Spears met SpongeBob and his eyes are buggin’ out.

Kermit ($42 + $30): We’re calling it. All this costume is is an ice skating uniform with a face screen printed on it.

15. Sexy Parakeet ($95): Wait, since when are parakeets something that should be seen recreated in sexy form?

You’ll be a one-eyed and one-horned when you wear this Purple People Eater Adult Women’s Costume.

Yandy has turned a crayon into a “sexy” costume, and our childhood art class is forever changed.
Anjelika Temple
As Co-Founder and Chief Creative Officer of Brit + Co, Anjelika Temple brings her voracious consumption of all things creative and colorful to DIY projects, geeky gadgetry finds and more. When she's not DIY-ing her heart out, you'll find her throwing dinner parties with friends or adventuring with her husband David, their daughters Anokhi and Indira, and their silly dog Turkey.
Halloween
Halloween Costumes
Halloween Halloween Costumes
More From Halloween Costumes