The Weirdest Fashion Moments of 2018 So Far 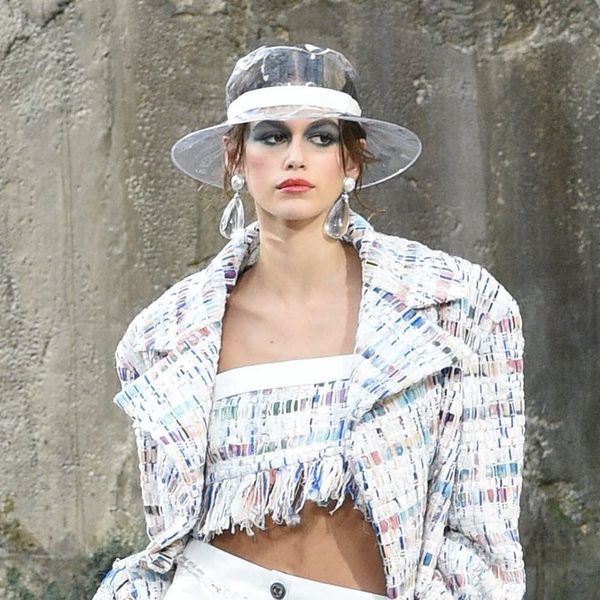 We might only be halfway through 2018, but there have been enough odd fashion moments for us to safely say, “Go home, 2018. You’re drunk.” Sure, 2017 might have given us the window-pane mom jeans, but we definitely didn’t know how safe we had it. Check out some of the wackiest fads this year has served up so far below.

1. Topshop’s Fake News Jeans: Needlessly provocative or just a part of our current zeitgeist? Topshop, purveyors of headline-making denim, rolled out their now sold-out Fake News Jeans for $90 a pop back in February just ahead of the president’s Fake News Awards.

2. Helmut Lang’s Bra Bag: Folks who wear bras know that over-the-shoulder-boulder-holders can sometimes double as a catch-all, but Helmut Lang made it official at the Spring ’18 show. The label debuted a bra with zippers along the cups that doubles as a legit handbag. (Photo via JP Yim/Getty For TRESemme)

3. Unravel Project’s Inside-Out Jeans: In case you were tired of putting your pants on the right way, French designer Ben Taverniti’s Unravel Project Inside-Out Crop Jeans ($975) might be for you. And the best news is they’re currently on sale for $389.

4. Chanel’s $1000 Plastic Rain Hat: Have a spare $1K lying around? Chanel sent this plastic hat down the runway on Kaia Gerber for the Spring/Summer 2018 show, and it will set you back a fair amount of change. Made of PVC and a black grosgrain ribbon, it’s already big on the streets of Paris. (Photo via Peter White/Getty)

5. ASOS’ Chainlink Jeans: We have to hand it to ASOS. The online retailer definitely doesn’t shy away from taking sartorial risks. These Ragged Priest Black Label Chaps ($99) certainly make some kind of a statement.

6. These Alife Croc Sock Combos: Streetwear brand Alife made waves in March when they released their Crocs with built-in socks. Yep. They went there with the socks with sandals combo… and they’re actually kind of cute?

7. Milk It’s Military… Um, Chaps: Yet another head-scratching item, these crotchless Vintage Military Chaps With Rhinestone Embellishment ($72) by Milk It caused quite the uproar online.

9. Cèline’s $600 Plastic Shopping Bag: In case you needed an accessory to go with your PVC Chanel hat, look no further than the Cèline plastic shopping bag. The brand’s former creative director, Phoebe Philo, might have been trolling all of us when she sent the see-through creation down her spring 2018 runway. (Photo via Christian Vierig/Getty)

10. Gucci’s Entire A/W 2018 Fashion Show: Gucci’s Autumn/Winter ’18 show was quite the spectacle. Not only was the set designed to look like an operating room, it had all the fixings of weird fash-un goodness, including severed heads, third eyes, baby dragons, and whatever the above is. (Photo via Catwalking/Getty)

12. Millie Bobbie Brown’s Sleeping Bag Dress: While luxury outerwear brand Moncler is better known for their lightweight, down jackets, they made quite the buzz this year at their Fall ’18 RTW presentation with a collection of padded gowns that bear more than a passing resemblance to sleeping bags. Stranger Things actress and budding fashion icon Millie Bobbie Brown has already gone head first into the look, but then again, in her short time in the spotlight, she’s already used to taking ensemble risks. (Photo via Jacopo Raule/Getty Images)

Kimberly Wang
Kimberly Wang writes about all things pop culture, tech, style, and beauty. She's a Bay Area transplant and has an MFA in Creative Writing from Columbia University. On a sunny New York day, you can find her hanging out with her mini schnauzer Isabelle Jellybean on a blanket in Central Park.
2018 style trends
Style News
2018 style trends Humor
More From Style News