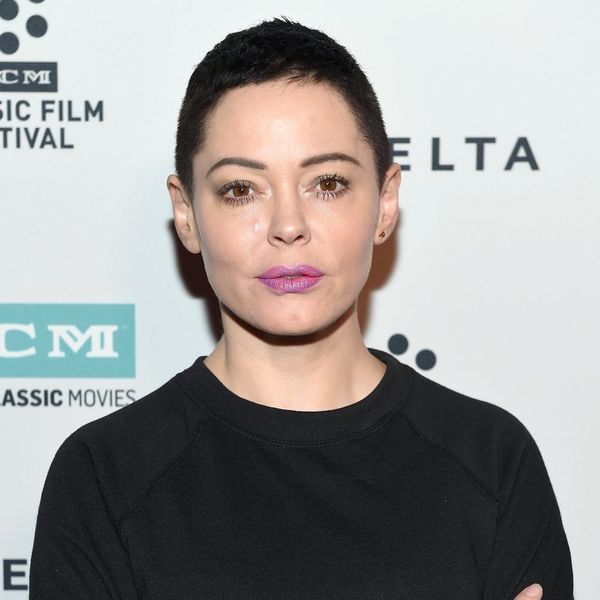 Rose McGowan has become one of the most powerful voices speaking out against Harvey Weinstein. Her Twitter account, where she has been the most active and outspoken, was temporarily suspended this week, and while Twitter says it was because one of her tweets violated the site’s terms by including a private phone number, McGowan has suggested that it has to do with her calling out Weinstein. Today, she and many others will boycott the platform “in protest of women’s voices being silenced.”

McGowan tweeted the call for #WomenBoycottTwitter on Thursday night, saying, “At midnight we RISE.” The movement quickly garnered support from many of her Hollywood peers.

Tomorrow. No secret timeline checking, no tweets, no clicking the bluebird square. They need to see we matter.

Chrissy Teigen is a frequent tweeter who has had a rocky relationship with social media. She is participating in the boycott for many reasons, including “to stand with the victims of sexual assault, online threats and abuse.”

“No secret timeline checking, no tweets, no clicking the bluebird square,” she wrote. “They need to see we matter….Tomorrow. And maybe even forever. #WomenBoycottTwitter.” Three minutes later, she followed up with a depressing snapshot of exactly the kind of online abuse she was talking about.

Many other women joined the cause before the night’s end too:

I stand in solidarity with all women, and all victims of sexual harassment/assault. #WomenBoycottTwitter @Twitter I’m out.

Tomorrow (Friday the 13th) will be the first day in over 10 years that I won’t tweet. Join me. #WomenBoycottTwitter pic.twitter.com/xoEt5Bwj5s

Also, any men who wish to show their support for .@rosemcgowan and all the other victims please join #WomenBoycottTwitter #boycotttwitter

Terry Crews, who just this week revealed his own experience with sexual harassment in the industry, was one of many men boycotting in solidarity, as well.

I stand with the women. No more tweets for me too.#WomenBoycottTwitter

Proudly joining #WomenBoycottTwitter for the next 24 hours even though Instagram doesn't properly capture my tone.

Some people raised concerns that the boycott didn’t represent the entirety of all women’s problems, or the attention they are (or are not) given on the platform.

Calling white women allies to recognize conflict of #WomenBoycottTwitter for women of color who haven't received support on similar issues.

Intersectionality = when you really want to support #WomenBoycottTwitter but you're conflicted bec Black women never get the same support. 😞

No #WomenBoycottTwitter when Leslie Jones was harrassed and abused online.. no solidarity or support for black women in a violent space.. pic.twitter.com/zlDS8G70J7

The boycott is intended to last 24 hours, and while a large number of women have declined to participate, it certainly appears as though the platform will be a little quieter today.