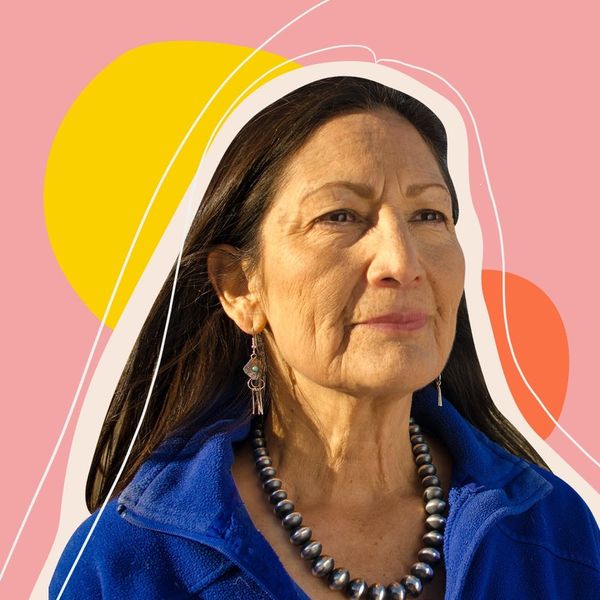 After the New Mexico primary election in June, Democrat Congressional candidate Deb Haaland’s landslide victory in the state’s first Congressional district caught national attention. Not only did Haaland defeat her opponent with a 15-point lead, but the registered Pueblo of Laguna tribe member became poised to make history as the first Native American woman to serve in Congress.

Haaland, a former Chair of the Democratic Party of New Mexico, sees her victory as a triumph of grassroots campaigning. “Two Saturdays before the election, a poll came out from the local paper that said I was three points behind the front-runner,” she tells us, “so we just felt very strongly that we could make up that three points with a very active field program.”

That “field program” meant going out and meeting as many constituents as possible within a short amount of time, but that’s exactly Deb Haaland’s style. Alongside her campaign staff and a small army of volunteers that included “a lot of Native women,” the 56-year-old candidate rolled up her sleeves and knocked on doors. Now, Haaland is in good standing to make history this November.

Haaland is one of the record-breaking number women across the country who was galvanized to run for office in the aftermath of the 2016 presidential election — and she is one of many to experience success. Her campaign, fueled by grassroots energy and community donations, focuses heavily on progressive values like climate change, affordable health care, and campaign finance reform. And while Haaland is aware and proud of her campaign’s historic nature in light of her identity as a Native American woman, she believes one of her greatest assets is how well she’s able to relate to the New Mexican people she would serve.

B+C: What inspired you to run?

Haaland: I ran for Lieutenant Governor in 2014, I was state chairwoman of the Democratic Party from 2015 to 2017, and I just really wanted to serve the people of New Mexico. I’ve been traveling around the state for many years, and every time — in my capacity as chairwoman of the State Party, in my capacity as staffer for the Obama reelection campaign, in my capacity as a lieutenant governor candidate — I was just inspired by New Mexicans who work hard every single day and give their kids a better life. I just want to help them in any way I can. It’s that simple.

B+C: What does a regular day on the campaign trail look like, for you?

Haaland: A regular day for me is going into my office and making phone calls, talking to donors and supporters, meeting community members. You know, Congressional campaigns take a lot of money. So we’ve had to raise money to reach everyone in our district, and we’ve been very successful at it.

B+C: You’ve said grassroots fundraising is a big priority for you. What inspired this?

Haaland: Well, I’ll give you one good reason: the NRA. We see that we’ve had so many school shootings, so many people have lost their lives to gun violence just in the past year. It’s out of control. And yet, we have a Republican-controlled House, Senate, and White House and they won’t touch that issue, because everyone is afraid of losing campaign contributions from the NRA, and some of those folks have gotten millions from the NRA. That’s one example. I don’t want to take money from any entity that doesn’t coincide with my values.

B+C: What was the mood on the night of your primary win?

Haaland: The mood on the night of my primary win was so festive. I was extremely happy, everyone here was excited. It was a great night. We celebrated right here at our field office in the heart of Albuquerque.

B+C: Your campaign and primary victory are obviously historic. How do you think your unique experiences as a Native American woman may shape your experience on the campaign trail, and what you would bring to the table in Congress?

Haaland: Yes, I’m a Native woman, but I’m also a New Mexican who has struggled like so many other people in our state. I’m a single mom, I know what it’s like to be on food stamps, to have student loans. It’s a struggle out there. I’ve gone, at one time, a year without being able to find a job. So I feel like, equally important as my ethnic background is understanding how New Mexicans struggle. And maybe my experiences from sharing those struggles, and my perspective, can help more families to succeed.

B+C: We’re seeing unprecedented numbers of women running for office and leading their communities. What advice would you give young women who see what’s happening today and want to get involved, but aren’t sure how?

Haaland: I think the best way for young women to get started is just by volunteering. That’s what I did. I started as a phone banker, now I’m running for Congress. I think that more young women should get involved in campaigns, volunteer for campaigns — not just political campaigns, but maybe issue campaigns, things that they truly believe in. Recently, we just had a big Families Belong Together march here in Albuquerque, and our civic plaza was filled with thousands of people protesting the family separation and immigration policies of this administration. And activities like that are a perfect way for any young woman to get started and when you do that, you essentially get networking opportunities, you build your network up, and you’re able to find out what else is happening that you can participate in. It’s worth its weight in gold to be active because you make a lot of friends that way, and when you are ready to do something, you can activate those folks to help you with whatever project you want to work on.

B+C: What have been some of the biggest surprises of this campaign so far?

Haaland: We were surprised that we won by such a large margin! We won with almost 41 percent of the vote, and it was essentially a six-way race, six candidates on the ballot including me. [In the weeks leading up to the election] we upped our field game, made a big ask of volunteers to come in, and we got people out on the doors, and we truly believed that our field program is what put us over the top. We didn’t know we’d win and beat our closest opponent by 15 points, but we’re very happy and proud of that fact.

B+C: What are the main issues you want to fight for if elected?

Haaland: In our campaign, we’ve talked a tremendous amount about fighting climate change, working toward 100 percent renewable energy, making sure every American and every New Mexican has health care, fighting to remove big dark money out of politics, and so many things. With this Supreme Court pick that President Trump has, there’s a lot of folks who are terrified because already the Court has worked to lessen the impact of unions, and so that’s an issue because labor unions help so many workers and built the middle-class. We need to really protect them. And, of course, women’s reproductive rights are always under attack. So, those are some of the things I know we’re concerned about and we’ll keep moving forward on that.

B+C: What do you hope that little girls and young women, especially those from communities of color, could take away from your campaign?

Haaland: I really hope that they believe that they can do it. I am here because I worked really hard, I didn’t have any connections, neither of my parents graduated from college, I don’t have an uncle or aunt who’s governor of the state, or has given me any breaks. I’m here because I worked extremely hard and found a team of folks to help me who are very dedicated to our vision for this campaign, and so, I just hope young women see me and believe they can do it. If I can do it, anyone can.

B+C: What are some ways people across the country can support your campaign?

Haaland: They can go to my website at DebForCongress.com and go to any of my social media platforms and retweet and re-post and comment, all of that. And certainly, of course as I previously mentioned, we worked extremely hard from the time I started this campaign until now to raise the money we made so we can reach every single voter in this district, and I’ve gotten there with a lot of grassroots donations. So if anyone feels compelled, it would be wonderful if they’d like to make a small donation to my campaign, too.

Kylie Cheung
Kylie Cheung writes about women's rights, reproductive justice, and national politics. Connect with her on Twitter @kylietcheung, or learn more about her work at www.kyliecheung.tumblr.com
Politics
Politics
Politics Women Who Run
More From Politics