Ya Mad? A Case for the Political Change-Making Power of Women’s Anger 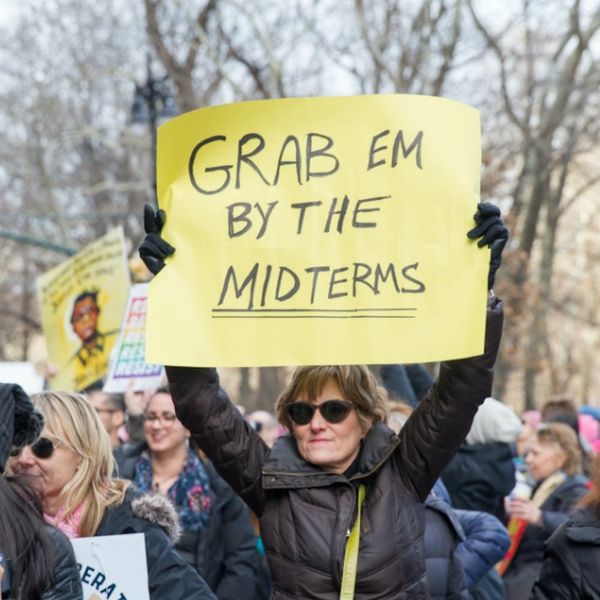 To paraphrase Solange, we have a lot to be mad about right now. An aggressive roll-back of trans rights. A stepping up of immigrant detention policies at the border. A Supreme Court appointee who’s, at best, ill-tempered and unsuitable and, at worst, a liar and a man accused of sexual assault — and who will very likely make it much, much harder for women to have autonomy over their own reproductive rights.

Journalist and author Rebecca Traister says that not only should we feel angry, we should BE angry. Borrowing a message from feminist writer Audre Lorde, Traister reaffirms the idea that anger is a powerful tool for real progress and change when it’s focused on the systems that regularly serve up injustice to people of color, women, the LGBTQ+ community, kids worrying about getting shot in the halls of their schools, undocumented immigrants, or the economically disadvantaged. Also known as: every single group at risk of being seriously harmed by the results of November’s midterm elections.

In her new book, Good and Mad: The Revolutionary Power of Women’s Anger, Traister recounts how women’s anger has been erased from history, despite being the central force behind so much of the progress that is currently at stake.

After the 2016 elections, Americans were told that the country was divided — that Hillary Clinton and the left had alienated white, working-class people and that it was time to listen to them, not a time to be angry. Traister disagrees, writing that anger is not only a valid response to an election in which one of the most qualified candidates in history lost to the least qualified, but also that the messaging that labels anger as divisive actually works to protect the people in power.

“Calls for civility,” writes Traister, “are designed to protect the powerful by casting them as victims.” (See: Trump’s fence-sitting about the violence in Charlottesville and the ridiculous “both sides” argument he attempted to sell to the nation.)

Women have been told forever that rage is ugly, unbecoming, and unproductive, that their fury is hysterical, unnatural, or even monstrous, but Traister takes the position that a discomfort with women’s anger should no longer be women’s problem.

“Anger, in isolation,” she tells us, “can be exhausting.”

Traister’s words echo those of the Black feminist author Michele Wallace, whose seminal 1975 essay “Anger in Isolation: A Black Feminist’s Search for Sisterhood” seems to have been a direct influence on Good and Mad.

As Wallace did, Traister goes on to explain that when that anger is shared with other like-minded people, it can be invigorating and even celebratory. Being angry together (especially when we use it as a motivator to do something like vote, attend a rally, or organize to support something we believe in) is a unifying, community-building experience. What’s key is to recognize that it’s much safer for some women to express anger than it is for others. Straight, cisgender, white women aren’t taking the same risks that other women are when it comes to showing their legitimate rage. We asked Traister about what that means for those women whose privilege protects them. How can white, straight, cisgender women promote an inclusive community of powerful, impactful women?

Women are also mad at a Democratic Party that has let them down: by not speaking up loudly enough in defense of reproductive rights, by not fighting hard enough against the SCOTUS appointment of Brett Kavanaugh, by not standing up for their female colleagues when Trump goes on the attack (typically via Twitter), and by all the other failures, big and small, that have frustrated potential voters. We have a lot to be Beyoncé-in-the-“Hold-Up”-video-mad about. Or (as seen in one recent instance of perfectly articulated female rage) you’ve-picketed-in-front-of-the-wrong-vegan-pizza-shop-mad about.

So let it out. Keep letting it out. Vote, but don’t stop there: Demand more from your representatives, and when they let you down, let them know… angrily.

What are your election day plans? Let’s talk about it on Twitter.

Corrina Allen
Corrina Allen is a film + television + travel writer from Toronto. Her journalistic goals include a backstage interview with David Byrne, the fictional character she identifies most closely with is John Wick, and her favorite dead person is Vladimir Nabokov. She never, ever Instagrams photos of her food (just her dog).
Feminism
Politics
Feminism Politics
More From Politics