10 of the Most Controversial Golden Globes Looks of All Time 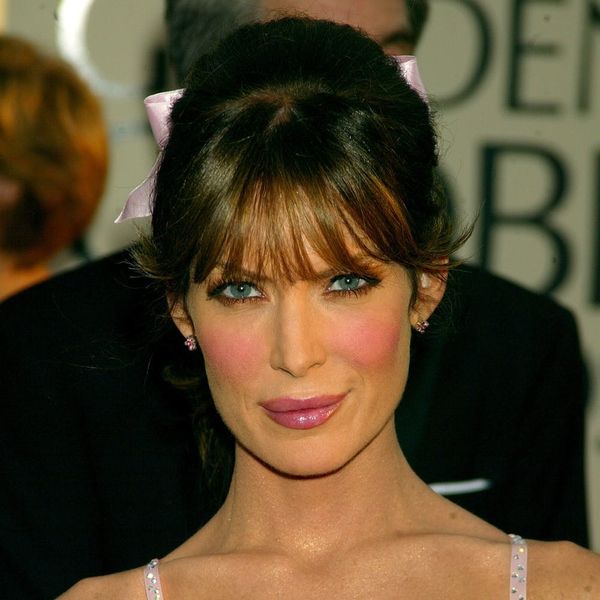 In 73 years, there have been a LOT of a different looks at the Golden Globes. From gowns that could have been wedding dresses to others that ran the color spectrum gamut, we really have seen it all. Some gowns (or semblances of them) stick out in our minds more than others, however, if only for their absolute wackiness. In honor of this Sunday’s awards (airing on NBC at 7/6c) we’ve compiled some of the most bizarre, out-there looks we could find from years’ past, and boy, are there some doozies! Don’t believe us? Take a peek for yourself!

1. Calista Flockhart: 2001 was a different time. Calista Flockhart, now married to Harrison Ford for seven years, was on the arm of Robert Downey Jr. (weird, right!?), and instead of the polished look we’re used to seeing from the pint-sized starlet, we got… this. Ice capades, anyone? (Photo via Newsmakers/Getty)

2. Cynthia Garrett: Cynthia Garrett was THE definition of patriotic back in 2002: In fact, she might as well have donned an American flag on the red carpet in this red, white and blue number. Oh wait… she did. (Photo via Ken Hively/Getty)

These days, Maria Menounos (who got engaged in 2016) is a fashion Ace, but in 2003, her red carpet look was… confusing, to say the least. With a giant accent sash that draped across the back of her dress, an off-the-shoulder neckline and a giant chunky costume necklace, she looks a bit like a Dancing With the Stars extra (or contestant, which she just so happened to be in 2012). (Photo via Jon Kopaloff/Getty)

4. Lara Flynn Boyle: By far the most infamous of all the looks on our list is Lara Flynn Boyle’s David Cardona ballerina tutu. Though she wore the outfit nearly 15 years ago, those pointe-inspired shoes and sparkled tutu are still seared freshly in our minds. CLEARLY, we’re not alone — the getup has been frequently compared to Björk’s renowned swan gown. As far as memorable (if entirely whaaaa?) looks go, this is truly tops. (Photo via Kevin Winter/Getty)

6. Diane Keaton: Diane Keaton has always marched to the beat of her own drummer when it comes to style, and awards shows are no exception: Take this eccentric ensemble she donned to the 2004 Golden Globes, for instance. We think it goes without saying that her alter ego, Annie Hall, would approve of this androgynous, floor-length, suit-like gown topped off with pearls, lace booties and White Rabbit gloves. (Photo via Carlo Allegri/Getty)

7. Rinko Kikuchi: Japanese actress Rinko Kikuchi might not have been the most known face on the 2007 carpet, but she surely turned just as many heads as the A-listers in this lavender Chanel pom-pom frock. (Photo via Hector Mata/AFP/Getty)

8. Helena Bonham Carter: Helena’s 2011 outfit was so wacky, she didn’t even bother to match her shoes! With one red and one green, Helena DGAF, letting them peek out unapologetically from beneath her tulle and holographic floral Vivienne Westwood gown. (Photo via Valerie Macon/AFP/Getty)

9. Paula Patton: Paula Patton singlehandedly proved that there IS such a thing as too much embellishment in this Stephane Rolland column piece at 2014’s award show. That thing (we *think* it’s a ruffle) is bigger than her head! (Photo via Trae Patton/Getty)

10. Jane Fonda: Now that’s a neckline! Jane Fonda showed up to last year’s Globes in a Yves Saint Laurent ensemble that wasn’t easily forgotten thanks to a VERY oversized ruffle that seems to have overtaken the upper half of her body. Perhaps she was trying to one-up Paula? (Photo via Trae Patton/Getty)

Nicole Briese
Nicole is the weekend editor for Brit + Co who loves bringing you all the latest buzz. When she's not busy typing away into the wee hours, you can usually find her canoodling with her fur babies, rooting around in a bookstore, or rocking out at a concert of some sort (Guns N' Roses forever!). Check out all her latest musings and past work at nicolebjean.com.
Celebrity Style
Style News
Celebrity Style Golden Globes Red Carpet
More From Style News