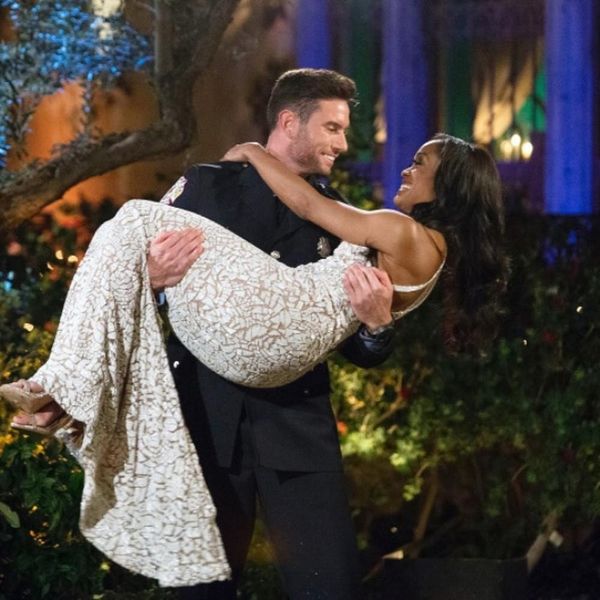 This season of The Bachelorette has certainly started off with a bang (and a penguin costume!), and while it was supposed to be a step forward when it comes to inclusion and diversity — considering it stars the series first POC lead, Rachel Lindsay — there was some seriously disappointing drama happening off-screen as two of the contestants were called out for their transphobic comments.

Who will sweep @therachlindsay off her feet? Find out TONIGHT on the season premiere of #TheBachelorette at 9|8c on ABC!

While off-hand remarks would be bad enough, both comments were found in the contestants official show bios, the first coming from 30-year-old Bryce. When asked to reveal his biggest dating fear, he stated that his would be finding out that “the chick was actually a dude.” Yeah, it’s hard enough to figure out how this guy made it on to the show let alone how the heck something like that made it onto the website. (FYI: It’s now been removed.)

And, like we said, this comment unfortunately wasn’t the only offensive tidbit spotted in a contestant’s bio.

30-year-old Lucas (yep, “Whaboom!”) stated that if he were to choose a lunch companion, either dead or alive, he would choose “Dead: Bruce Jenner, Alive: Caitlyn Jenner… Would be a very interesting convo.” This statement reinforces views that trans people in a way “kill” their former selves, which is not how all trans folks feel — gender is fluid, and many transgender people feel that they’ve always been themselves regardless of presentation.

Viewers were quick to call out both men on their statements, as well as question how they could have been approved by the network, and ABC has decided to respond (at least to the anger around Bryce’s line), by saying, “This comment does not reflect the views of ABC, Warner Horizon or Bachelorette Rachel Lindsay.”

Not a terribly sincere or thoughtful apology, TBH (and Lucas’s comment is *still* up, in case you’re wondering). We’ll just have to wait and see if any other offensive behavior crops up from the men while the cameras are rolling this season. We can only imagine what Rachel Lindsay would think.

What do you think about Bryce and Lucas’s comments and ABC’s response? Let us know @BritandCo!

Desiree O
Desirée O is a ‘Professional Bohemian’ who loves anything and everything related to the arts, entertainment, and pop culture. She ADORES being a ‘Newsy’ for Brit + Co, covering all of the latest tidbits of awesomeness that you want to read about. When she’s not writing, she’s either making messy art, going on long adventurous walks with her camera, or poking around over at bohemianizm (http://www.bohemianizm.com/). You can find out about Desirée O and her work at http://DesireeO.com/ or follow her on Twitter @DesireeO.
transgender
TV
transgender