This Season of the Bachelorette Is Going to Be Awkward AF 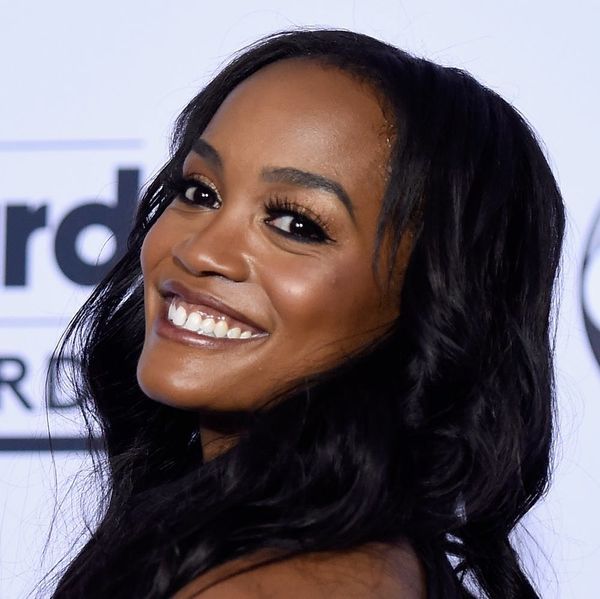 Rachel Lindsay, noted skeptic of Nick Viall’s season of The Bachelor (as Chris Harrison, her squad of Nick’s castoffs, and she herself frequently point out), is back for love on this season of The Bachelorette. Lindsay is the ABC shotgun wedding reality show’s first black lead. It only took 13 years! Pat yourselves on the back, ABC executives.

They couldn’t have picked someone more charming to lead the way than Rachel. She’s a successful lawyer, (man did I believe it when I heard her say, “Objection, your honor. Speculation.”) who owns an injured rescue dog named Copper, who’s clearly the best man in the mansion. Nick’s loss is surely 31 (gulp) men’s gain. Before the man parade, she meets up with her friends from last season. “So crazy to be back in the mansion!” one says. “This brings back memories!” You were there, like, six months ago, girl. After some reassuring words, she leaves her squad in the room, where they will hopefully remain for the rest of the season.

Then comes the emotional labor of meeting 31 reasonably handsome guys, some of whom she’ll have to kiss. On the lips. After standing outside for endless quick intros, some of them quite painful, she offers a toast before getting to know them. “Let’s hold up a glass and cheers to no regrets!” she yells. Some of them held up empty glasses. Regrets abound in this household. Let’s meet these bros.

Peter, a business owner, is at the front of the pack because he is incredibly pretty. INCREDIBLY PRETTY. I’m a sucker for gap tooth.

Alex, a total meathead, brought a vacuum to clean up the competition. He foolishly didn’t bring a Dyson Small Ball Multi Floor cleaner, which would’ve done the trick and been excellent product placement.

Bryan, a Colombian chiropractor, went in for a terrifying kiss, which looked way too open-mouthed and turned me off, but apparently turned Rachel on because he received the first impression rose. Congratulations, Bryan. Maybe say less generic corny phrases in Spanish going forward, por favor.

DeMario, an executive recruiter, met Rachel on the reunion episode of The Bachelor, where he presented her with tickets to Vegas and offered to elope with her. He’s fine for sure, but earlier Whitney warns that his intentions may not be true! I got my eye on you, DeMario.

Fred, an executive, knew Rachel as child. She was his camp counselor and he was apparently a very bad boy. Too real, Rach. Forget your past and embrace your now.

Anthony, an education software developer, clearly believes that children are the future and would likely make very beautiful future children.

Jamey is in sales and could sell me bottled air.

Total Losers (These dudes never had a chance and were unsurprisingly eliminated.)

Blake K., a marine, who led with the story of how his grandparents only dated a few months and just celebrated their 65th wedding anniversary. Those were different times, Blake. Move on.

Milton, a hotel recreation supervisor whose name is Milton, for god’s sake.

Mohit, a startup bro and recreational Bollywood dancer, who I was totally rooting for until he got so drunk that he forgot to meet Rachel.

Kyle, a marketing consultant who is clearly the most forgettable of all the guys because I can’t remember a single thing about him.

Law Boyz (Rachel’s not boring enough to end up with a fellow lawyer, right? RIGHT?)

Josiah, a prosecutor, is one of the most confident men on the show, telling Rachel when they first meet, “You will have no reasonable doubt.” “Haha!” she laughs, uncomfortably. “Legal terms!” I’ll bet all the torts, statutes, and prima facie in the world that Josiah is not long for this mansion.

Jack Stone, attorney at law, is probably a personal injury attorney from television and I DON’T LIKE HIS NAME.

Rob, a law student, is simply too far behind practicing lawyer Rachel to win her heart. He is sent packing. Let us know when you pass the bar, baby bro.

Saviors (Rachel was surprisingly unimpressed with 2/3 of the men dedicated to saving lives, with one notable fiery exception.)

Grant, an emergency medical physician, arrived in an ambulance and left in a limo.

Jedidiah, an ER physician, had shockingly little sense of urgency in trying to get Rachel’s attention.

Bryce is a firefighter who received a rose. While almost all firemen are hot, Bryce is transphobic, so throw some water on him, Rach.

Clearly Auditioning for Dancing With the Stars (Rachel was impressed with these showboats’ sick moves.)

Eric, a personal trainer, has more subtle moves and is likely to slowly shuffle out of the mansion in the next few weeks.

Will, a sales manager, does a solid physical comedy routine, transforming from Urkel to Stefan. It was definitely the hottest of the evening’s gimmicks.

Iggy and Diggy (Not the rhyming scheme one ever expects on a reality show but primed for a double date spin-off.)

Iggy is a very beefy and intense consulting firm CEO.

Diggy is a sneakerhead.

Possible Murderers (There were more creepy dudes than I expected and, unfortunately, they all got roses. Something tells me they will covet those roses in the most terrifying way imaginable.)

Jonathan is the most American Psycho-looking of these creepers. When he said, “Can I ask you to close your eyes for just a second,” I deeply feared for Rachel’s life. I still do after it turned out he just wanted to tickle her.

Lee, a singer/songwriter from Nashville, definitely has some sociopathy going on, and is an early favorite for Season 13 villain.

Dean, a startup recruiter, told Rachel, “I wanna go black and never go back,” at the Bachelor reunion. His teeth are way too white for him to not be a psycho.

Brady, a model, brought a sledgehammer to break the ice. And then he never. Got. Rid. Of. It.

Blake E., an aspiring drummer and personal trainer, is sex positive and very threatened by the other men in the house. Threatened enough… to kill?

Adam, a real estate agent, brought the ugliest, scariest doll to what is probably a haunted mansion. Actually, I’m not mad at it. The Bachelorette would be way better with ghosts.

Beneficiaries of Too Many Available Roses (Rachel should’ve stepped on those roses rather than give them to these doofuses.)

Matt, a construction sales rep, showed up in a terrible penguin costume. It was plastic and shiny. Dude could’ve at least dressed up as a cuddly, plush penguin.

Lucas, a tool whose loudly screamed catchphrase is “Whaboom!” I really hope he didn’t come here to make friends.

Congratulations to Rachel on making it through the first night without stabbing herself while pinning roses on all of those bros. It only gets easier from here!

Tell us what you think of The Bachelorette so far on Twitter.