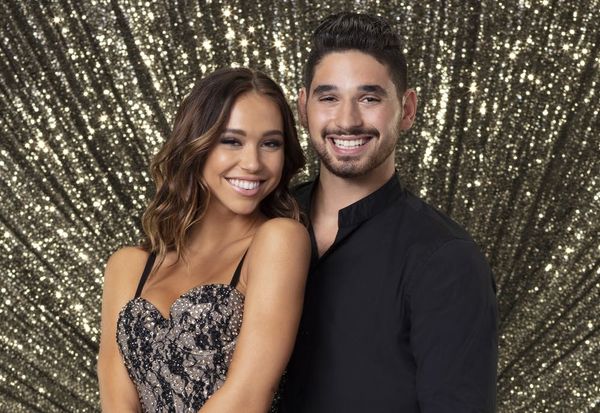 Sounds like a showmance is a-brewing! On the Monday, October 29, episode of Dancing With the Stars season 27, contestant Alexis Ren admitted that she’s catching some feelings for her pro dance partner Alan Bersten.

“It’s so much fun to dance with someone that you have a connection with,” Ren, a model, said of Bersten in a taped segment. “It’s almost like time slows down. We communicate not just through our steps and our movements, but with our hearts too.”

It didn’t take long for Ren to admit her feelings for her partner. “I am developing feelings for Alan,” she confessed. “And I didn’t see this one coming. But it happened really quickly though, so I think I’m still trying to process it.”

Ren chose to be up front(ish) with Bersten, telling him that she thought they had great chemistry. His response? “Alexis’ smile lights up the room,” he said, admitting that hearing how Ren felt about him had his emotions all over the place. “You know, she’s funny, she’s kind, she has a huge heart. I want to be 100 percent certain before I tell her how I’m feeling. I have a lot to think about.”

They wouldn’t be the first couple DWTS has brought together: The show also counts Val Chmerkovskiy and Jenna Johnson, Kym Johnson and Robert Herjavec, Emma Slater and Sasha Farber, and Peta Murgatroyd and Maksim Chmerkovskiy among its successful matches to date.

Following their Halloween-inspired jazz dance routine on Monday’s episode, Ren and Bersten played coy when co-host Erin Andrews pushed the pair for details on what seemed to be a potentially burgeoning relationship. “You know, honestly, I’m having so much fun,” Bersten said. “Only time will tell.”

In the meantime, it’ll be impossible not to read into the adorable (and, admittedly, flirty) Instagram pics these two post of each other.

Do you think Alexis and Alan would make a good couple? Let us know @BritandCo!