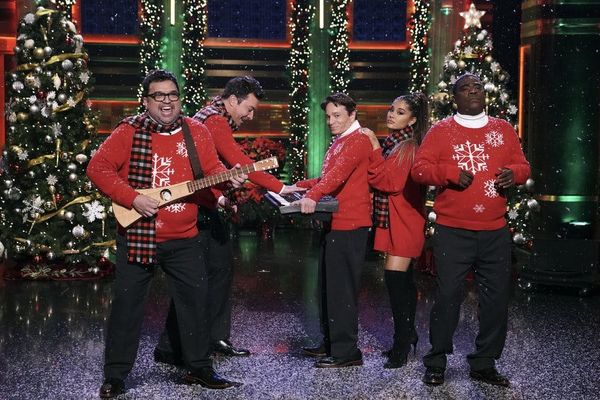 Ariana Grande has been a frequent and favorite guest on both Saturday Night Live and Jimmy Fallon’s Tonight Show over the years, and on the Tuesday, December 17, episode of the latter, she joined the host and other SNL alums to perfectly recreate a classic Christmas sketch.

Grande, along with former SNL cast members Horatio Sanz, Tracy Morgan, Chris Kattan, and, of course, Fallon, busted out a performance of “I Wish It Was Christmas Today,” a quick musical sketch that first debuted on Saturday Night Liveway back in 2000.

The song became a staple on the weekly live sketch comedy show, with different versions — once more serious, once with costumes, and once with the Muppets — appearing on air for years after its debut. (None of the sketch’s original performers remain on SNL). It has even been covered by Julian Casablancas, lead singer of The Strokes.

Although she’s considered one of the best singers in pop music today, Grande didn’t actually sing during Tuesday night’s recreation of the simplistic tune — she simply danced alongside Kattan (who also held Fallon’s keyboard) and Morgan, while Sanz and Fallon handled vocal duties.

The crew wore matching festive sweaters adorned with white snowflakes, plaid scarves, and black slacks, save for the “Thank U, Next” singer, who wore her standard thigh-high boots. Watch the video below.

What do you think of Grande’s appearance in “I Wish It Was Christmas Today”? Let us know @BritandCo!