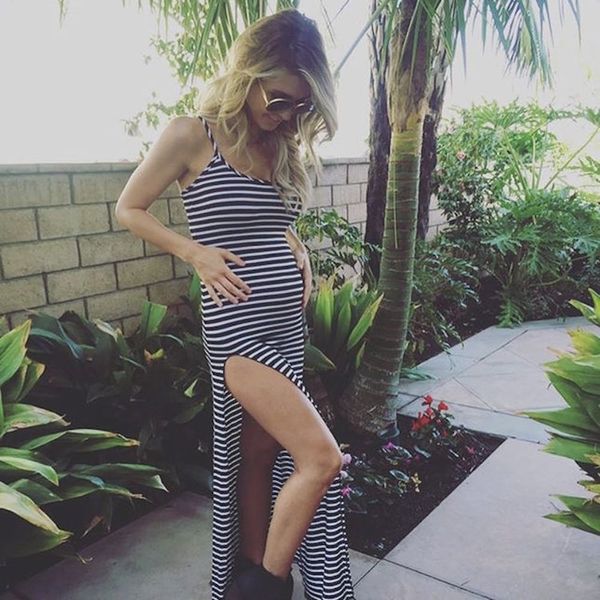 1. It’s a girl for Audrina and Corey! If you’re anything like us, you’ve been following Audrina Patridge’s pregnancy on social media — from her pregnancy announcement back in December to her most recent gorgeous #maternitygoals photoshoot —and while she initially said that her and hubby Corey Bohan were going to try to keep the sex of the baby a surprise, she said straight up that she was going to have a hard time waiting. She also had a hard time keeping it a secret once she found out, so to her blog and to Instagram she went with some very preciously pink-themed photos! “You guys have no idea how hard this has been to keep my mouth shut, but we are finally ready to reveal the gender of our little munchkin! Don’t worry, I’ll get right to the point…We are thrilled to announce that we will be welcoming a sweet little GIRL into our family in July!” If you’re feeling bold, she also said they’re open to name suggestions, so by all means — have at it! (via @audrinapatridge)

2. Dear Diary: HEATHERS IS GETTING A REBOOT! Okay, now that the good news is out of the way, let’s get to the bad: The TV Land revival of the game-changing ’80s teen flick is an anthology — think the current TV version of Fargo — and won’t feature any of the original characters. It’s described as a black comedy that takes place in the present day, and this time, the outcasts have become high school royalty. What do you think of all these twists? We’ll still check it out! (via The Hollywood Reporter)

3. Here’s how to cop Taylor Swift’s vacation bikini look. Finally, we’re learning the REAL important facts about the vacation photos that broke the Internet (is that a thing we’re still saying?) this week. Taylor Swift and Calvin Harris’ romantic tropical getaway featured a few Taylor bikini pics, and it turns out the already iconic black lacy number are separates from For Love and Lemons. Tay is wearing the black lace “Valencia” bikini; the top will cost you $167, and the bottom $140. The impending meme of beach goers recreating Taylor’s model pose in the suit? Priceless. (h/t People)

4. Here’s how the man who hacked into celebrities’ photos did it. Guys, please pay attention to your emails. According to NBC News, Ryan Collins, 36, who was charged in the 2014 hack of celebs like Jennifer Lawrence, sent fake emails that looked to be from Apple and Google, causing the victims to hand over their usernames and passwords, the U.S. Attorney for the Central District of California said. He then got into their email accounts and in some cases downloaded everything associated to those accounts in the cloud. Scary stuff. He was charged in Los Angeles with violating the Computer Fraud and Abuse Act. (via NBC, photo via Pascal Le Segretain/Getty)

5. Shut it down — this dog and its tiny duck friends define #squadgoals for the rest of 2016. For a family that fosters mainly dogs, the Stolls, from Sydney, Australia, had a challenge on their hands when decided to foster some teeny ducklings. How would the dogs react? It turns out they had nothing to worry about, because the ducklings took immediately to their six-month-old rescue pit bull, Patty Cakes Huckleberry (DEAD). The entire friendship is documented on the family’s Instagram, so good freaking’ luck getting any work done today. (via @lifeofpikelet)

6. Quote of the day: “If you were happy every day of your life you wouldn’t be a human being. You’d be a game-show host.” — Veronica Sawyer, Heathers, because we had to.