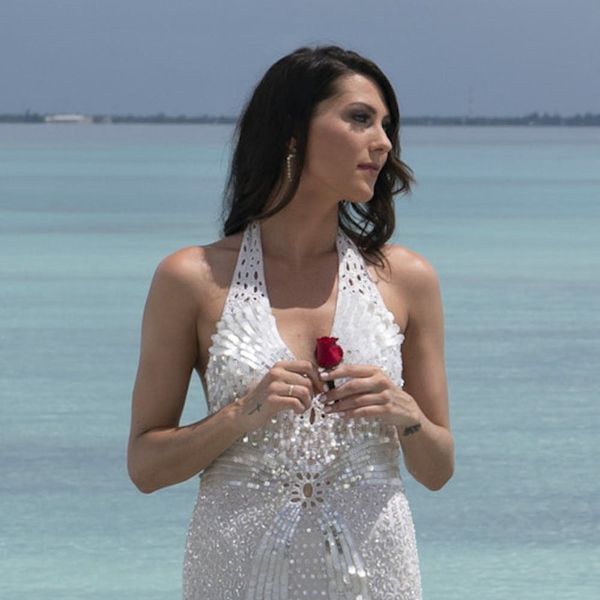 Warning: Major spoilers ahead for the season 14 finale of The Bachelorette. Do not read if you have not watched the August 6 episode, unless you just can’t wait to find out which of Becca Kufrin’s final two men — Blake Horstmann or Garrett Yrigoyen — won her heart.

Well, Bachelor Nation, we made it. After 11 weeks of roses, controversy, and interminable fighting among a group of supposedly adult men, Becca Kufrin gave her heart (and her final boutonniere) to Garrett Yrigoyen, leaving Blake Horstmann absolutely heartbroken.

We’d like to say we’re surprised, but anyone who’s been paying attention to the off-screen drama over the last few months probably saw this coming. TMZ posted blurry photos of Becca and Garrett at the final rose ceremony even before the premiere aired on May 28, and Becca foreshadowed it herself a few days later, when she indirectly came to Garrett’s defense after it came to light that he had liked Instagram posts mocking feminists, immigrants, transgender people, and Parkland shooting survivors. (He later apologized in a note on his brand-new Instagram account.)

“I want viewers to be open to everyone,” she told Entertainment Tonight at the time, “and I want them to go through this season with me and watch my love story unfold with all of these men and to be open, because that’s how I went into this journey.”

We’ll admit we were still kind of hoping there would be a last-minute twist — not in the vein of last season’s debacle, of course, but perhaps a minor misdirect — but ultimately, Becca is the one who has to be happy with the outcome. And it seems she is. So let’s look at how she got there.

The episode opened with Becca, Blake, and Garrett in the Maldives to meet her family. First up: Garrett, who broke down crying twice — once while talking with Becca’s uncle about losing his grandfather to cancer, and once while telling Becca’s sister Emily about how he wanted to take care of her and guard her heart. “It’s something I’ve been missing in my life that I finally found,” he said through tears.

Becca’s family — and her sister, in particular — loved him, which put Blake in a tough spot. Blake’s talk with Emily went pretty well, but the rest of the family had a lot of questions about Garrett and how Blake would feel if Becca didn’t choose him in the end. The whole experience sent Blake into a little bit of a spiral, and by the time he and Becca parted ways, he was convinced he was going to lose her, even though her family said afterward that they felt like he was more on her level, and that Garrett would be a bigger risk. Becca herself admitted that she thought from the beginning that Blake would be the last man standing. But did she still think that?

Fortunately, she had a little more time to decide. Her final date with Garrett was a boat ride near the equator, complete with pods of dolphins swimming around them. Afterward, they met up at Garrett’s bungalow, where they talked about what their future would be like — kids, fights, bagged lunches, and all.

“I love her so much, I’d let her turn my heart out just so she’d be happy,” he said in his confessional.

Blake’s date was next, and although Becca said she thought their “hearts just recognized each other,” it was clear that her impending decision was weighing on her. After a bike ride and a little stand-up paddle-boarding, they had a heart-to-heart about what was ahead, and she admitted that she was struggling with trying to figure out what she should do.

The second part of their date was a little better. Blake presented her with a time capsule he’d made of his favorite moments with her, and they talked about how far they’d come and how far they still could go. “All I wanted this entire week was clarity, and I feel like I got that,” Becca said in a confessional. “I could see Blake standing in front of me, professing his love for me, and me professing it back.”

Alas, that’s not how things worked out. Blake did profess his love for her, but she couldn’t return it. Instead, she told him that as much as she cared for him, and as much as she pictured him being the one at the end, she had to say goodbye. He was understandably devastated, and as Becca walked him back to the car, he asked how he could have it gotten it so wrong. Before they parted ways, he told her he loved her one more time, and then they both proceeded to break down.

Watching it back during the live part of the finale, Blake admitted it was hard to see himself like that. “You just never really ever consider that one day you’d have a ring in your hand, moments away from getting down on your knee … and [she’d] say no,” he told Chris Harrison, recalling how blindsided he was by her rejection.

He got a chance to ask Becca about her choice during their “After the Final Rose” face-to-face but ultimately said he had no hard feelings toward her and just wanted her to be happy.

Which brings us back to the Maldives and Garrett. After her tearful goodbye to Blake, Becca returned to the beach, where she told Garrett she loved him before he got down on one knee and asked her to marry him. (She said yes, of course.)

“Off the market!” she shouted. “Here’s to us and our future.”

What did you think of the season 14 Bachelorette finale? Tell us @BritandCo!