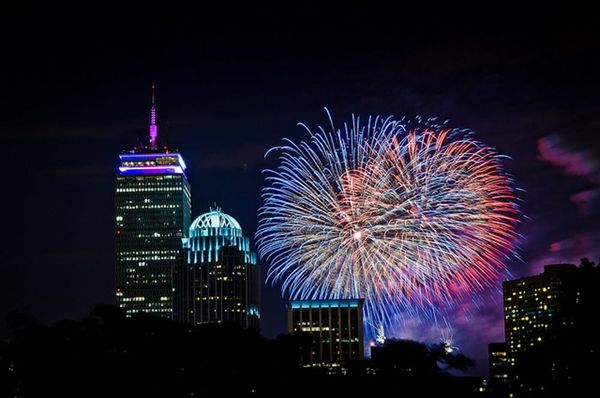 When it comes to the Fourth of July, there are some cities that take their fireworks very seriously. What’s more American than turning a day off of work into a patriotic competition? Here, we salute 10 cities that go so all out with their firework displays that even the most jaded watching from their picnic blankets below will be on their feet.

1. Philadelphia, Pennsylvania: It makes sense that the birthplace of America has one of the most impressive Fourth of July shows in the country. Instead of starting the celebration with just “The Star Spangled Banner,” the city boasts celebrity performances — The Roots, Ariana Grande, Nicki Minaj, Ed Sheeran and Jennifer Hudson are all performing this year. It’s not the sit-back-in-your-lawn-chair type of night. The fireworks themselves are displayed in the sky over the beautiful Philadelphia Museum of Art. That’s how you celebrate America, people. (via Visit Philadelphia)

2. Washington D.C.: You knew D.C. would be on the list, right? First of all, the backdrop is just impossible to compete with. With red, white and blue fireworks lighting up the sky above the Lincoln Memorial, this is the stuff postcards are made of. (via Washington)

3. Addison, Texas: Everything is bigger in Texas — including their fireworks displays. Last year, Addison put on a 30-minute show for 500,000 people. No wonder they call it “Kaboom Town.” Texans who don’t feel like dealing with parking and the crowds at the event space can just watch from home; it’s impossible not to see the fireworks wherever you are in the city. And fireworks aren’t the only reason to keep your eyes on the sky; earlier in the day there’s an airshow. (via Dallas News)

4. Boston, Massachusetts: Boston has one of the most well respected and priciest shows in the country; last year the city spent $2.5 million on the 21-minute event. The fireworks are shot into the air above the Charles River, with the city’s skyscrapers as its backdrop. (via Lexx in The City)

5. Lake Tahoe, Nevada: If you want to makeout under the fireworks, Lake Tahoe is the place to do it. Their Lights on the Lake show is as pretty as it sounds. You guys, fireworks above a lake! Watching from a paddleboat is the popular thing to do here, but finding a spot on Nevada Beach with your toes in the sand is an option, too. (via North Lake Tahoe)

6. New York City: A city as big as New York is expected to put on an elaborate fireworks display. And they deliver! Usually the city fires the 40,000 fireworks over the Hudson River, but this year they are switching things up and the Brooklyn Bridge will be the show’s backdrop. It’s the largest fireworks display in the entire country. You know the Empire State has to do it up! (via Gray Line New York)

7. Atlantic City, New Jersey: East Coasters flock to Atlantic City year-round to hit up the clubs, so it’s no surprise that even their July 4th celebration has an EDM vibe. What makes their display one of the best is the 3D light show held above the boardwalk. The beach bars lining the shore also offer plenty of opportunities to get your Jersey Turnpike on. (via Best of N.J.)

8. Pismo Beach, California: If you’re using the long weekend to do a little camping, Pismo Beach is the perfect place to spend the Fourth. The halfway point between San Francisco and Los Angeles, it’s a huge recreational spot for campers, which the more than 65 restaurants are happy to cater to. Besides the main event, there’s also a clam festival, car show and live band performances. (via Leanne Phillips)

9. Boulder City, Nevada: Boulder City is probably the only place in the country offering their fireworks with a side of pancakes. These folks don’t wait until sundown to get patriotic. They start the day with a parade and massive pancake breakfast. As if that wasn’t awesome enough, they host a large, intense water fight. The fireworks display itself is so spectacular that it makes this suburb hold its own against the flashier city of Las Vegas. (via Boulder City Social)

10. Nashville, Tennessee: Everything revolves around music in Nashville, so it makes sense the city would secure some awesome performers to rock out on the nation’s birthday. This year, Ashley Monroe, Billy Currington and Striking Matches will perform before the Nashville Symphony orchestra. Besides the music, Nashville also has one of the biggest firework displays in the south, so if you live below the Mason-Dixon line, it’s worth the drive. (via Nashville Business Journal)

Think your city is a contender for the best? Tell us below!

Emily Laurence
Emily is a contributing writer for Brit + Co and former teen magazine editor. She lives in New York City, where she's on a mission to find the most delicious mocha in the East Village.
4th of July
Party
4th of July
More From Party