12 Rom-Coms You Can Watch on Netflix Right Now 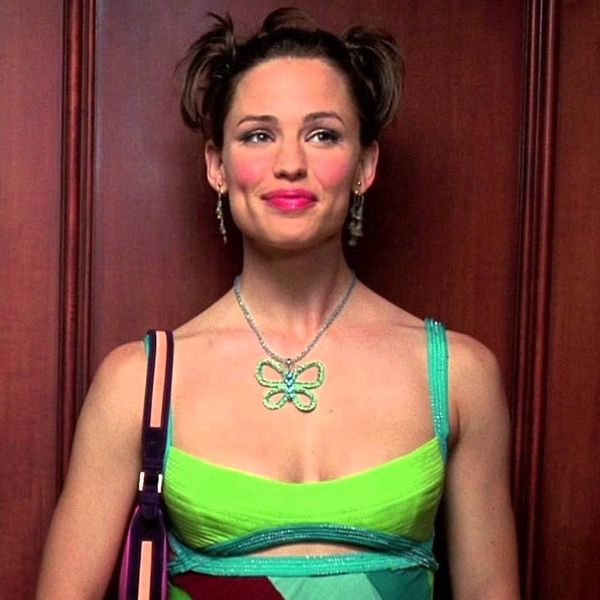 Valentine's Day may be six months away, but there's no better time than the present when it comes to romance, areweright? Whether you're looking for love, in the throes of a brand-new summer fling, or have been with your beau for years, we've got just the Netflix picks for helping you catch the feels in a hurry. Check out the network's best rom-com offerings in the slides to follow!

10 Things I Hate About You: No matter how many times we watch Julia Stiles’ character, Kat, recite the fake reasons she hates Heath Ledger's character, Patrick, for making her fall so hopelessly in love with him, it never gets old — nor does the moment when Kat’s little sis Bianca (Larisa Oleynik) socks her skeezy ex in the nose. (Photo via Buena Vista/Getty)
Bridget Jones’s Diary: Just try not to crack a smile at the intro scene, in which Bridget Jones (Renée Zellweger) does her best Céline Dion while drunkenly singing “All by Myself” into a hairbrush. This one’s got it all, from gut-busting laughs to a sordid love triangle, and really, what more can you ask for in a rom-com? (Photo via Miramax/Universal)
Revenge of the Bridesmaids: While there have been plenty of flicks about bridal parties gone awry (ahem, Bridesmaids and Bachelorette), this one has a bit of a twist, with the bridesmaids (including Raven Symone and Joanna Krupp) actively working to sabotage the would-be wedding of their frenemy in order to get the groom back together with the pal he left for his wicked fiancée. Got it? Good. (Photo via Patti Perret/ABC/Getty)
13 Going on 30: Fans of nostalgia (and Michael Jackson’s “Thriller”) would be remiss not to watch as Jennifer Garner channels her inner '80s teenager, complete with heavy blue eyeshadow, fear of cooties, and all-around awkwardness. Mark Ruffalo is impossibly endearing as her childhood friend-turned-love interest. (Photo via Dimitrios Kambouris/WireImage/Getty)
Can’t Buy Me Love: This '80s classic stars a young Patrick Dempsey as a nerdy high school student who pays a cheerleader (Amanda Peterson) to pretend to be his girlfriend to fool their unsuspecting peers into thinking Dempsey is cool AF. Oh, and spoiler alert? Sparks fly (because of course they do). (Photo via Buena Vista)
A Case of You: While A Case of You certainly has its moments of poignancy, it also has its share of light-hearted laughs too, with rom-com fave Justin Long attempting to woo Evan Rachel Wood based solely on the info he ferrets out from her public Facebook page. Tres moderne, no? (Photo via MPI Home Video)
Beauty & the Briefcase: Former tween queen Hilary Duff may be all grown up in Beauty & the Briefcase, but she’s still the same lovable girl we fell for back in her Lizzie McGuire days, bumbling her way through dates and interviews in this ABC Family movie that has a lot in common with another rom-com, How to Lose a Guy in 10 Days. Duff plays Lane, a slightly less-than-truthful journalist on a quest to nail a dating article for a major magazine — ringing any bells? (Photo via Hilary Bronwyn Gayle/ABC/Getty)
Picture Perfect: In yet another classic case of a fake relationship that sparks real feelings, Jay Mohr ends up falling head over heels for Jennifer Aniston, who he’s only supposed to be pretending to date to help her get ahead at the sexist firm where she works as an ad exec. (Photo via 20th Century Fox)

How to Steal a Million: Not only is Audrey Hepburn's iconic Hollywood home currently up for grabs, but you can also watch her on Netflix as she goes to great lengths to help save her father, a forgery artist, from being discovered and going to jail. Along the way, she falls in love with a burglar (Peter O'Toole), natch.

Sandy Wexler: This new Adam Sandler movie, courtesy of Netflix, sees the funnyman playing Sandy Wexler, an eccentric, ever-so-slightly out-of-touch talent manager who falls for his one star client. With Jennifer Hudson as Courtney, a talented singer who agrees to sign with Wexler, we’re treated to plenty of endearing moments and even some musical ear candy too: It’s a win-win. (Photo via Netflix)
Emma: Gwyneth Paltrow is the embodiment of “always a bridesmaid, never a bride” in this period piece based on the Jane Austen novel of the same name. Emma fancies herself a regular Cupid, setting up everyone but herself for aim with love’s true arrow, until — surprise! — it hits her anyway. (Photo via Miramax Films)
Mean Girls: Mean Girls may be a movie about friendship (or lack thereof), but there’s plenty of romance, as well: Who could ever forget iconic dreamy lines such as, “Your hair looks sexy pushed back,” and “Gruel?” (Photo via Paramount Pictures)

Nicole Briese
Nicole is the weekend editor for Brit + Co who loves bringing you all the latest buzz. When she's not busy typing away into the wee hours, you can usually find her canoodling with her fur babies, rooting around in a bookstore, or rocking out at a concert of some sort (Guns N' Roses forever!). Check out all her latest musings and past work at nicolebjean.com.
Netflix
Movies
Netflix