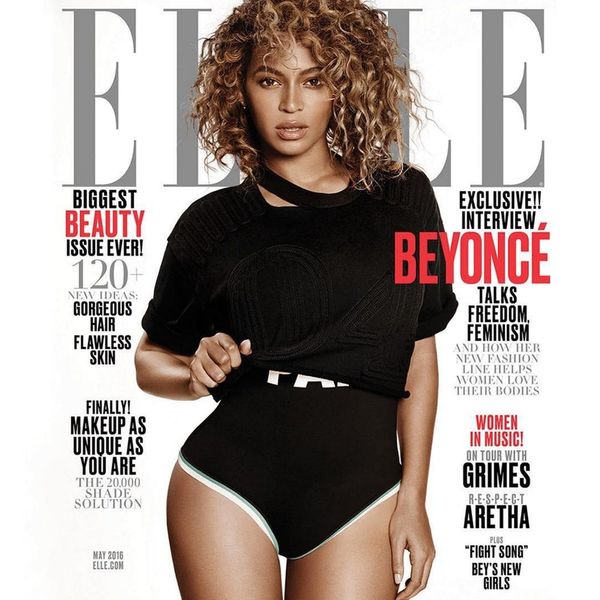 Beyoncé is someone who, over the last few years, has let her work speak for itself. After dropping the racially-driven music video for “Formation” Bey didn’t take to social media to defend her artistic choices against haters. She just did it. And to be honest, this sort of “no comment” act is part of what makes her the ultimate girlboss. She does what she does and if you don’t like it, well, that’s too bad. While Beyoncé is notoriously difficult to score an interview with (she even turned down one with Vogue for their September issue last year), Elle managed to do the impossible. In the rare interview (made available online today) Beyoncé opens up about her new line Ivy Park, feminism and the moment when she knew she made it. Here are three major #girlboss takeaways we learned from this rare glimpse into the mind of Beyoncé.

1. Always be overprepared. When asked about how the idea for her upcoming line with Topshop came about, Beyoncé explains she’s been a fan of the retailer for a long time and actually approached them with the idea. Sir Philip Green, the chief executive of Topshop’s parent company, thought she wanted to do a celebrity endorsement deal like they’ve done before, but Beyoncé explained that no, she wanted a partnership. She says, “I presented him with the idea, the mission statement, the purpose, the marketing strategy — all in the first meeting. I think he was pretty blown away, and he agreed to the 50-50 partnership.”

2. Putting yourself first doesn’t mean you’re selfish. Whether you’re swamped at work or raising children, it’s easy to put your needs last. But when you do that everything else suffers. As a working woman who is also a mom Beyoncé says, “Women have to take the time to focus on our mental health — take time for self, for the spiritual, without feeling guilty or selfish. The world will see you the way you see you, and treat you the way you treat yourself.”

3. “Feminist” is not a dirty word. Even with so much attention on issues like the wage gap and tampon tax (and let’s not forget the US’s abysmal parental leave provisions), there is often still a stigma around the word “feminism.” But Beyoncé wants to be clear: If you believe in equal rights you’re a feminist. Plain and simple. She says, “I don’t want calling myself a feminist to make it feel like that’s my one priority, over racism or sexism or anything else. I’m just exhausted by labels and tired of being boxed in. If you believe in equal rights, the same way society allows a man to express his darkness, to express his pain, to express his sexuality, to express his opinion — I feel that women have the same rights.”

4. If someone underestimates you, use that to your advantage. When Beyoncé is asked to recall the moment she knew she had real power, Beyoncé says, “I’d say I discovered my power after the first Destiny’s Child album. The label didn’t really believe we were pop stars. They underestimated us, and because of that, they allowed us to write our own songs and write our own video treatments. It ended up being the best thing, because that’s when I became an artist and took control.”

Cortney Clift
Cortney is the senior writer and special projects editor at Brit + Co. She typically covers topics related to women's issues, politics, and lifestyle. When she's not buried behind her computer you'll find her exploring New York City or planning her next big adventure.
Beyonce
Work
Beyonce Girlboss