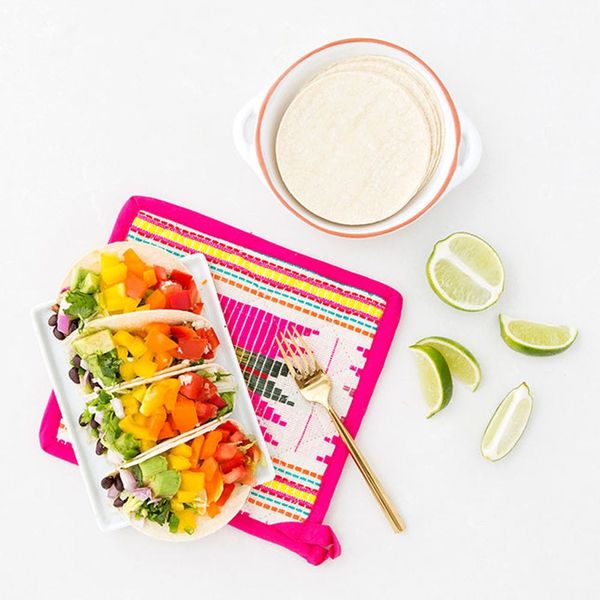 Rainbow foods are a real-deal trend right now. From rainbow mac and cheese to rainbow donuts to rainbow grilled cheese, we have happily found ourselves a cushy seat on this bandwagon. So today, to get you ready for your upcoming Cinco de Mayo celebration, we’ve got tacos with rainbow salsa. Not only is this a rainbow lover’s recipe, but we are also making cauliflower rice for those of you who want to ride up alongside and high five us from the cauliflower alternatives bandwagon. Save us a seat over there, will ya?

— ground pork (or other protein)

Turn on some mariachi music and let’s get making!

We’ll start out with the cauliflower rice recipe. There are a couple different ways to make this (you can pan fry it or bake it) — today we’re sticking ours in the oven.

Chop florets and place them in your food processor. Pulse the cauliflower until it resembles rice. Don’t over do it or you’ll wind up with cauliflower mashed potatoes.

Cauliflower has a lot of liquid in it (more than you’d guess), so the next step is to squeeze some of it out. Place the cauliflower on top of a paper towel, then add a second piece of paper towel on top. Firmly press down on the cauliflower with your hands until you get as much liquid out as possible. Then spread the cauliflower evenly on a baking sheet and sprinkle it with salt. Place it in the oven at 350 degrees Fahrenheit for twenty minutes, or until it browns slightly. Alternatively, you can pan fry the cauliflower with a little bit of oil or butter.

Though it tastes significantly different than rice, cauliflower is such a great alternative for anyone who is avoiding grains. And it’s honestly delicious!

Another delectable way to taste the rainbow, this salsa is legit.

Chop up all of your ingredients into tiny pieces. Then line them up in rainbow order. That’s it!

We get it — the ingredients taste better when mixed (you want a little bit of each flavor in every bite), so feel free to stir them together when you’re about to eat. It’ll still be pretty!

This is a quick and easy alternative to sour cream and it tastes SO GOOD.

Add your favorite hot sauce to Greek yogurt and mix. Taste the sauce and keep adding hot sauce until it reaches the spice level you want.

To keep these tacos classic, we’re adding taco seasoning to our meat.

Fully cook your ground pork on medium heat. Then add a half cup of water to the entire packet of taco seasoning. Stir the seasoning mixture into the pork until combined. We opted to leave the juices from the pork in the pan, but you can drain it first for a healthier version.

Guys, it’s time! You’ve got all of the pieces ready to start building your tacos.

Set up a bar so that your friends can make their own.

For the prettiest tacos known to man, add each ingredient in ROYGBIV order.

Make one of these margarita recipes and then dig in!

What other recipes are you making for Cinco de Mayo? For more inspiration, check us out on Pinterest.

Roxy Taghavian
Roxy has been creating and executing DIY projects since her very first trip to Michael's as a child. If there's a project at hand, she'll figure out how to make it. When she's not wielding her hot glue gun, she can be found at the beach, traveling to far off lands, reading and running at her gym "The Panhandle."
Cinco de Mayo
DIY Recipes
Cinco de Mayo tacos Trending DIY Tutorials
The Conversation
Reviews:
More From DIY Recipes

Get Ready to Road Trip With PB & J Snack Bars