Did You Know? These Celebs Are Friends IRL! 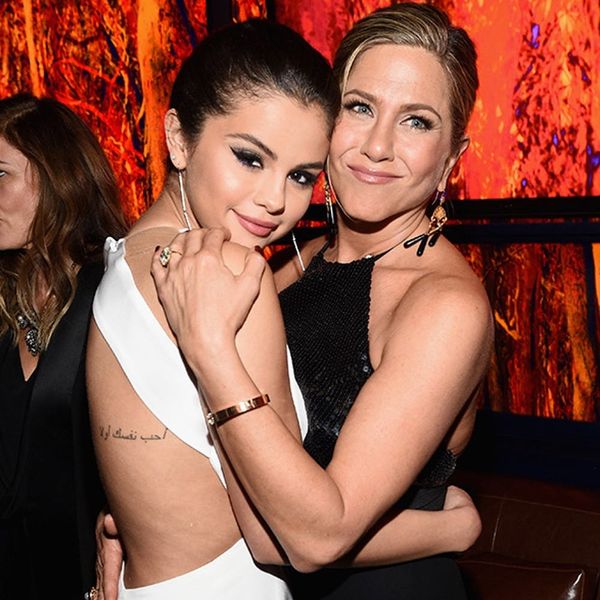 We all know and love the classic celeb friendships: Tina Fey and Amy Poehler, Jennifer Aniston and Courteney Cox… The list goes on, but there are actually a *ton* of celeb friendships that we had no idea about — like this week’s Instagram lovefest that revealed Amy Schumer and Jennifer Lawrence are on vacay together. What. Yes. Keep scrolling and prepare for your mind to be blown at some other awesome pairings.

1. Sophia Rivka Rossi + Nicole Richie: Okay, so Sophia wrote a book and launched a website with Zooey Deschanel, but did you also know Sophia is BFFs with Nicole Richie too? Nicole stopped by one of Sophia’s book signings to interview her, which we all know was just an excuse to hang out with her girl ;) Oh, and just an FYI: Sophia will be joining us at Re:Make 2015! Maybe she’ll be BFFs with us too. (Photo via @sofifi)

3. Rihanna + Jim Parsons: This is one duo we didn’t expect. While their friendship began while they were filming Home, these two friends now give each other serious life advice… like how to take the perfect selfie. (Photo via Cooper Neill/Getty)

4. Jennifer Lopez + Leah Remini: Buds for years, this pair tweets at each other with cute hashtags on the reg and sometimes they even jam out to Jay Z together. (Photo via Mark Mainz/Getty)

5. Kate Hudson + Katy Perry: Fun fact: This BFF duo actually has the same name, since Katy Perry’s real name is Katheryn Hudson. Who knew?! The best part of their friendship? Game nights are totally a thing. (Photo via Frazier Harrison/Getty)

6. Kim Kardashian + Demi Lovato: The best part about having a best friend is the support that they continuously give you, and that’s exactly what Kim KW and Demi Lovato do for each other. Too cute! (Photo via Christopher Polk/Getty)

7. Lena Dunham + Claire Danes: Remember when Claire Danes crashed Lena Dunham’s Emmy interview back in 2013? Yep, we’ve loved them ever since. But guess what? They actually grew up in the same NYC neighborhood and were introduced by a mutual friend. The more you know, peeps. (Photo via Jamie McCarthy/Getty)

8. Cara Delevingne + Selena Gomez: Former Disney star Selena Gomez and model Cara Delevingne are total gal pals. The pair have even vacationed together in St. Tropez for Selena’s birthday. We want in on this friendship! (Photo via Rachel Murray/Getty)

10. Michelle Williams + Busy Philipps: Proof that these two are BFFs: 1. They vacation together. 2. Busy Philipps’ comment on this Instagram included the term BFF. It’s a no-brainer, right? (Photo via @busyphilipps)

11. Robert Pattinson + Katy Perry: Katy and Robert have been good friends for years and were recently seen partying at Coachella together. And that’s when you know you’re totally friends for life. (Photos via Larry Busacca/Getty + Jason Merritt/Getty)

12. Demi Lovato + Iggy Azalea: Guys. The first time Iggy and Demi hung out, they went to Target and bought Christmas decorations and supplies to make gingerbread houses. Not only do we love that that’s what they decided to do on their first friendship date, but we also love that they’ve got a little DIY goin’ on. (Photo via Christopher Polk/Getty)

13. Selena Gomez + Jennifer Aniston: Things we love about this friendship: They make pizza at Jen’s house when they hang out. ‘Nuff said. (Photo via Michael Buckner/Getty)

14. Katy Perry + Rihanna: Talk about a dynamic duo! We still have our fingers crossed on another collab. (Photo via Larry Busacca/Getty)

15. Emily Blunt + Anne Hathaway: We think we saved the best for last. You know why? Anne Hathaway introduced Emily Blunt and John Krasinski, AKA the cutest couple ever. (Photo via Christopher Polk/Getty)

Which pair surprised you the most? Share your thoughts in the comments below.

Samantha Tagher
Sammy was born and raised in the great state of Kentucky and attends the University of Kentucky, where she studies Marketing and Merchandising, Apparel + Textiles. She loves a great DIY project, is a loyal Apple customer and has a *slight* obsession with nail polish, office supplies and, of course, her seven pound toy poodle, Buddy.
Kardashians
Home News
Kardashians Re:Make
More From Home News