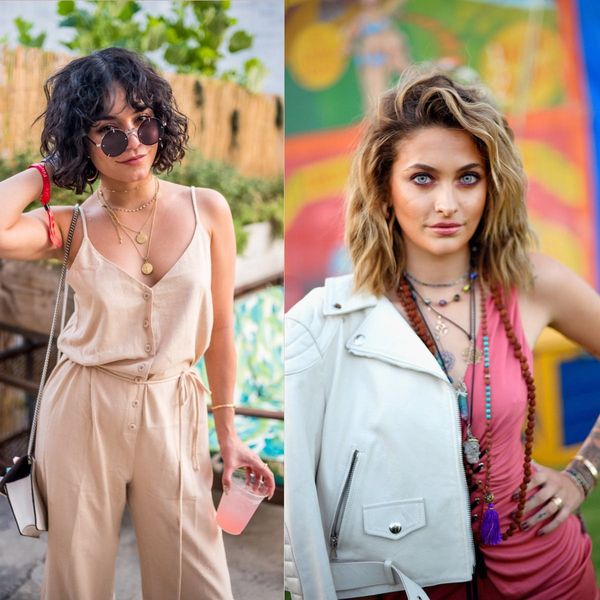 As the weather gets cooler, the trends for hair keep getting hotter. The bob is still on the rise, and straight hair is picking up steam. We've got our eyes set on a slew of celeb mid-length hairstyles that are going to make the coming season primed for a cut. Keep reading for serious seasonal celebrity hair inspo.
Brittany Snow: Do like the Pitch Perfect 3 actress and don't shy away from layers upon layers this fall. This is a look that is particularly good if you're in the process of growing out your roots. (Photo via Frederick M. Brown/Getty Images)
Paris Jackson: Embrace your waves. Ladies who are #blessed with this lovely texture, try a shaggy lob à la Jackson for the perfect transitional weather look. (Photo via Matt Winkelmeyer/Getty Images for Moschino)
Kendall Jenner: Try out the Victoria's Secret model's messy lob this fall, but balance it with a clean center part. If you have fine hair, apply some sea salt spray to give it some oomph. (Photo via Victor VIRGILE/Gamma-Rapho via Getty Images)
Bella Hadid: Dust off your straighteners, because the trending 'do is definitely the blunt, single-layer bob just like Hadid's. (Photo by Pascal Le Segretain/Getty Images)
Gabrielle Union: The actress is giving us serious hair inspo by sporting the same even-length bob as Hadid but with a deep side part. (Photo via Ilya S. Savenok/Getty Images for Hublot)
Vanessa Hudgens: Calling all you curly girls! You can rock the bob as the weather turns, as the Second Act actress demonstrates here. (Photo via Steven Ferdman/Getty Images)
Michelle Dockery: Take a note from the Downton Abbey alum's book and try voluminous, polished waves for those fall weddings you've booked. (Photo via Karwai Tang/WireImage)
Kat Graham: The blunt bob is also gorgeous when teased, as proven by the How It Ends star. (Photo via Monica Schipper/Getty Images for Netflix)
Mila Kunis: Make waves with a mid-length textured bob sported here by the The Spy Who Dumped Me star. (Photo via Getty)
Lily Collins: There's something kind of retro-yet-modern about this sleek, shoulder-length coif, especially when it's clipped back on one side as Collins has done here. It's the perfect autumn date night look. (Photo via Marc Piasecki/GC Images)
Shailene Woodley: With the steamy weather almost behind us, fall is the perfect opportunity to try out the fringe. We love it styled with soft, beachy waves just like the Adrift star's. (Photo by David M. Benett/Dave Benett/Getty Images)
Saoirse Ronan: If you're one of those folks who just can't seem to get volume in your roots (we feel your pain), this Mary Queen of Scots star's sleek, side-parted bob is for you. (Photo via Gabe Ginsberg/Getty Images)
Rihanna: The "Wild Thoughts" singer's silky, straight strands hit at the collarbone, which is long enough to put up and not as fussy as extra-long locks. (Photo via Pascal Le Segretain/Getty Images)
Taylor Swift: Even the "Delicate" singer is rocking the mid-length tresses these days, paired with her signature extra-long side bangs and some windswept curls. (Photo via BG024/Bauer-Griffin/GC Images)

Would you try any of these styles? Tweet us @BritandCo!

Would you try any of these styles? Tweet us @BritandCo!

Kimberly Wang
Kimberly Wang writes about all things pop culture, tech, style, and beauty. She's a Bay Area transplant and has an MFA in Creative Writing from Columbia University. On a sunny New York day, you can find her hanging out with her mini schnauzer Isabelle Jellybean on a blanket in Central Park.
Celebrity Hair
Hair
Celebrity Hair Haircuts Hairstyles