50 Amazing Celebrity Costumes to Inspire You This Halloween 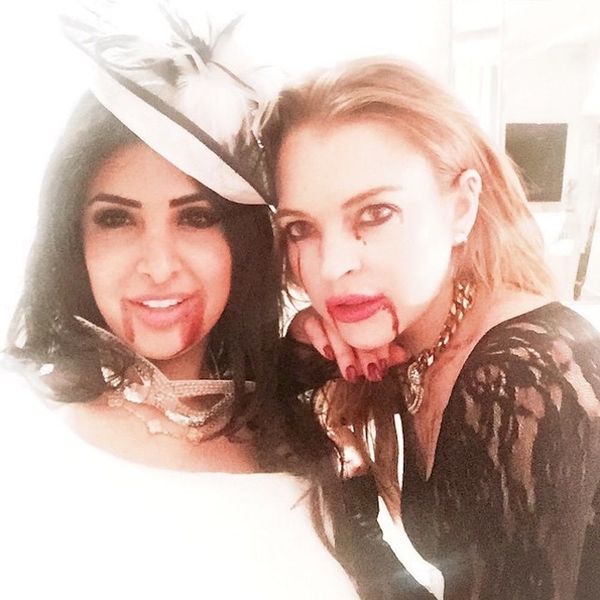 We’re all about keeping up with our favorite celebs and their shenanigans via Instagram. And when Halloween gets involved, it really gets exciting. Much like the Academy Awards and star-studded birthday parties, A-listers pull out all the stops for this special holiday. Scroll on for 50 of our favorite celebrity Halloween costumes. Ranging from adorable to scandalous, these looks might just inspire your next spooky ‘fit.

1. Beyonce and Blue Ivy: This duo is giving us major mother-daughter costume envy. We’d expect nothing less from Queen Bey. (Photo via @beyonce)

2. Miley Cyrus: We can’t wait to see what Miley does next, but until then, we’ll keep obsessing over her Lil’ Kim costumery from last year. (Photo via @mileycyrus)

3. Britney Spears: Experiencing some ’90s flashbacks over Brit’s costume? This totally takes us back to those days of “Oops, I Did It Again!” (Photo via @britneyspears)

4. Rachel Zoe: We love a good couple’s costume. This Sonny and Cher get-up is just all kinds of good. (Photo via @rachelzoe)

6. Brad Goreski: Here’s Brad disguised as Queen Bey herself. We knew we could count on this A+ celebrity stylist to nab an over-the-top look. (Photo via @mrbradgoreski)

7. Miley Cyrus: When your godmother is the legendary Dolly Parton, it only makes sense to pay tribute to her when dressing up for Halloween. (Photo via @mileycyrus)

8. Ellen DeGeneres: Ellen’s hilarious scare videos are like the potato chips of YouTube: You can’t just watch one. And only Ellen can nail this hysterical tribute to Nicki Minaj. (Photo via @theellenshow)

9. Heidi Klum: This lady is known for her legendary Halloween costumes. She isn’t even recognizable as an elderly woman. (Photo via @heidiklum)

11. Katy Perry: Halloween is all about the junk food, so it only makes sense to dress up as your favorite guilty pleasure. Our girl KP just gets it. (Photo via @katyperry)

12. Kelly Osbourne: Leave it to Kelly Osbourne to don a killer costume for a birthday party! We’re loving her portrayal of Rocky Horror Picture Show‘s Magenta. (Photo via @kellyosbourne)

14. Kim Kardashian: We can always expect a good costume from Kim K. We bet even Ms. Wintour cracked a smile when she saw this on her feed. (Photo via @kimkardashian)

15. Ashley Benson: This Pretty Little Liars star is definitely handing us some inspiration regarding our last-minute costume ideas. (Photo via @itsashbenzo)

17. Lucy Hale: Leave it to Ms. Hale to come up with one of the cutest costumes we’ve ever seen. (Photo via @lucyhale)

19. Nicole Richie: We have to hand it to this pint-sized star. This playful get-up is a total trip. (Photo via @nicolerichie)

20. Paris Hilton: We’re not ashamed to admit that this look is on our Halloween costume bucket list. And Miss Hilton totally nails it. (Photo via @parishilton)

23. Taylor Swift: This costume could also double as a pajama set, and we are 100% on board with that. (Photo via @taylorswift)

24. Naya Rivera: The Glee star’s Carmen Sandiego outfit is taking us back to those days at the book fair. (Photo via @nayarivera)

25. Britney Spears: We’re all about Britney’s classic Snow White ensemble. Her dwarves prove you can still win at Halloween and rock a laid-back vibe. (Photo via @britneyspears)

26. Lance Bass: One of our favorite boy band members is taking a trip down memory lane with this #TBT goodness. (Photo via @lancebass)

27. Ed Sheeran: If anyone can pull off an Austin Powers costume, it’s Ed. Yeah, baby! (Photo via @teddysphotos)

28. Kylie Jenner: Kylie and her friend are killing it as a Chucky/Bride of Chucky duo. (Photo via @kyliejenner)

30. Kelly Ripa: Excuse us while we die over Kelly’s “Shake It Off”-inspired costume! (Photo via @kellyandmichael)

32. Nicole Richie: This Cruella de Vil costume (with puppies) is one of the cutest family costumes we’ve seen. (Photo via @nicolerichie)

33. Neil Patrick Harris: NPH and his clan continue to stun with their family costumes! (Photo via @nph)

34. Lea Michele: A pre-Scream Queens Lea vamps it up as Little Red Riding Hood and leaves us wondering if she’s the Red Devil… (Photo via @msleamichele)

35. Tom Brady & Gisele Bündchen: Tom Brady may be a football superstar, but he is not above dressing as the Lion to his Dorothy. Talk about #relationshipgoals. (Photo via @gisele)

37. Fergie & Josh Duhamel: Fergie and Josh are known for their epic Halloween costumes, but this one has to be our very favorite. (Photo via @joshduhamel)

39. Beyonce: We couldn’t imagine a more fitting costume for Queen B. We can see her halo, halo, halo. (Photo via @beyonce)

41. Chris Colfer: Chris’ costume is definitely causing us to revisit our childhood love for all things R2D2. (Photo via @hrhchriscolfer)

42. Jessica Alba: Have you ever seen a more on-point take on Witches of East End? We’re thinking no! (Photo via @jessicaalba)

44. Vanessa Hudgens: Miss Hudgens slays as a vampire. BRB, going to watch Interview With the Vampire. (Photo via @vanessahudgens)

45. Liv Tyler: Zombie makeup is no easy feat. But we’re betting Liv’s finished project knocked it out of the park. (Photo via @misslivalittle)

46. Angela Kinsey: Angela may have kept her costume toned down for The Office, but her Top Gun-inspired getup would have definitely won the office’s costume contest. (Photo via @angelakinsey)

48. Kristen Bell: There will probably be a lot of Game of Thrones-inspired costumes out there this year, but they won’t be this cute. (Photo via @IMKristenBell)

49. Adam Levine: The gang’s all here. Talk about Halloween #squadgoals. (Photo via @adamlevine)

50. Sofia Vergara: It’s a bird! It’s a plane! It’s… Sofia Vergara? Yep, the glossy-tressed funny lady gave a Supergirl costume a spin for a night on the town. (via @sofiavergara)

What are some of your all-time favorite celebrity costumes? Share in the comments!