20 Donut Day Recipes for Every Diet 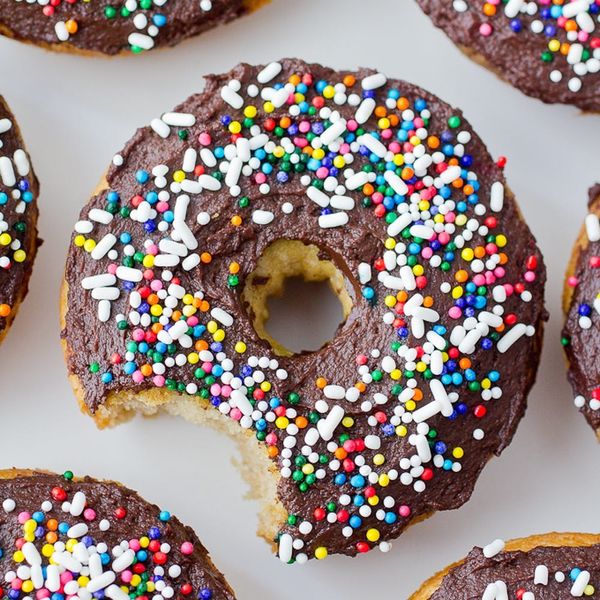 If you’re following a paleo, vegan, raw-vegan, gluten-free, sugar-free or other restrictive diet, festivities like birthdays or donut parties may seem like cruel jokes. We feel you! No longer do you have to look on in envy while everyone else at the party devours sweet confections. In honor of National Donut Day, we’ve rounded up 20 delicious recipes for every diet (including omnivores!), so you don’t have to miss out.

1. Healthy(er) Strawberry Donuts: Greek yogurt, fruit and coconut oil mean these treats are good for us, right? Use whatever fresh berries you have on hand and try swapping the citrus in the glaze for a mix-and-match baked donut recipe to last through every season. (via Brit + Co)

2. Gluten-Free Chocolate Doughnuts: Classic bakery-style chocolate donuts with chocolate glaze get a modern update by swapping in a gluten-free flour mix. Rainbow sprinkles make these look just like the original, so you won’t miss a thing. (via Seasonal Cravings)

3. Vegan Kettle Corn Donuts: Why trek across the country to find a Voodoo Doughnuts when you can make some massively impressive copycats in your own kitchen? Bonus: No one will believe this buttery glaze and kettle corn topping are vegan. (via Fettle Vegan)

4. Raw Peanut Butter Doughnuts: Raw vegan donuts? You may be thinking “no thanks” — until you see these raw peanut butter and chocolate beauties, that is. Use a donut pan to create the shape, or roll into balls and go if you just can’t wait to dig in (we couldn’t blame you). (via Rawberry Fields)

5. Blood Orange Glazed Donuts: How pretty are these sweet pink little gems? Blood orange juice gives the glaze its natural hue, and this could easily be made gf or vegan with a few simple substitutions. (via K&R Adventures)

6. Vegan Lavender Rose Baked Donuts: These baked vegan confections are almost too pretty to eat; lavender, rosewater and edible flowers give them a romantic touch. Even better? There’s no sugar involved! (via Healthy Slow Cooking)

7. Apple Cider Donuts (Gluten Free + Dairy Free): Apple cider is the star of this grain-free, dairy-free recipe. It even stands in as a one-ingredient caramel sauce you’ll want to spoon on everything. Who knew you could make caramel from just apple cider? (via Hold the Grain)

8. Paleo Chocolate Frosted Doughnuts: Paleo, gluten-free, grain-free, naturally sweetened and low-carb aren’t terms we expect to describe a donut, but this recipe proves that even a classic chocolate-frosted can be all that and more. (via A Clean Bake)

9. Mini Rainbow Donuts: These are for the anything-and-everything-goes diet followers out there. Who could resist these adorable rainbow pinwheels? Bonus points for topping with rainbow cereal. (via Brit + Co)

11. Bourbon Bacon Red Velvet Donuts: Bourbon, bacon and red velvet — these tap all our favorite flavors. Use cake mix to save some time, and top with sweet millionaire’s bacon for a decadent treat. (via Brit + Co)

12. Baked Lemon Donuts With Blackberry Glaze (Gluten Free + Paleo): Fresh lemon and blackberries give these donuts an amazing flavor and color. A blend of flours replaces wheat to make these treats gluten free and paleo friendly. We count these as good for you! (via Downshiftology)

13. Bombolini: These deep-fried, cream-filled Italian donuts are the *bomb*. You can def swap flours and milks to make this treat grain free and dairy free, but if you’re an omnivore, your tummy is about to thank you. (via The Baking Fairy)

14. Boston Cream Donuts (Gluten Free + Paleo): Can we first talk about the genius of turning a classic like Boston cream pie into a donut before we even get into the fact that these are dairy free, grain free and paleo friendly? You just won brunch forever. (via Healthful Pursuit)

15. Mini Blueberry Cardamom Donuts (Vegan): Mini donuts are always too cute to pass up. (Plus we can eat like four before they count, right?) These vegan beauties use the trendiest new ingredient, aquafaba, instead of eggs. Freeze-dried berries give the glaze its gorgeous color and depth of flavor. Try all the fruit + spice combos you can think of! (via Vegan Yack Attack)

16. Vegan, Gluten-Free Chocolate Chip Banana Bread Doughnuts: Anything dipped in this much chocolate has to be good. Turn a classic banana bread recipe on its head with this vegan version — we bet it would be good in loaf form too. (via The Little Plantation)

17. Vegan Blackberry Donuts: Fresh berries capture the best parts of summer in these brightly flavored treats. Swap flours to make these gf and paleo to suit an even broader range of diets. (via Namely Marly)

18. Vegan Sweet Potato Doughnuts (Gluten Free + Paleo): These sweets tick every box. Why didn’t we think of using sweet potatoes sooner? You can substitute chickpeas or pumpkin for a different flavor profile without sacrificing that gorgeous texture. (via Black White Vivid)

19. Carrot Cake Donuts: We love a reason to have cake for breakfast, and we’ll just say the addition of carrots means it’s good for us. Pecans add a wonderful bite to both the body and the topping, but leave them out if you’re serving a nut-free crowd. (via Baking Ginger)

20. Mocha Glazed Donuts: Can you believe these only take 10 minutes from start to finish? The addition of coffee to the glaze means they’re a perfect match for your morning cuppa. Sweet and chocolatey with a jolt of caffeine? That’s a win in our book. (via Life, Love and Good Food)

Sarah James
With an MFA in Costume Design and a website dedicated to sous vide cooking, Sarah's been in the DIY space since long before it was cool. She was the Food + Living editor for Instructables.com where she produced three books including How to Do Absolutely Everything, and the Think Tank director at Betabrand where she designed the bestselling Dress Pant Yoga Pants. Sarah also worked as a make-up artist for Blue Man Group and has built costumes for film, theater and dance.
Breakfast Recipes
Recipes
Breakfast Recipes Dessert Recipes Gluten-Free Paleo Sweets Vegan Recipes Vegetarian Recipes
The Conversation
Reviews:
More From Recipes