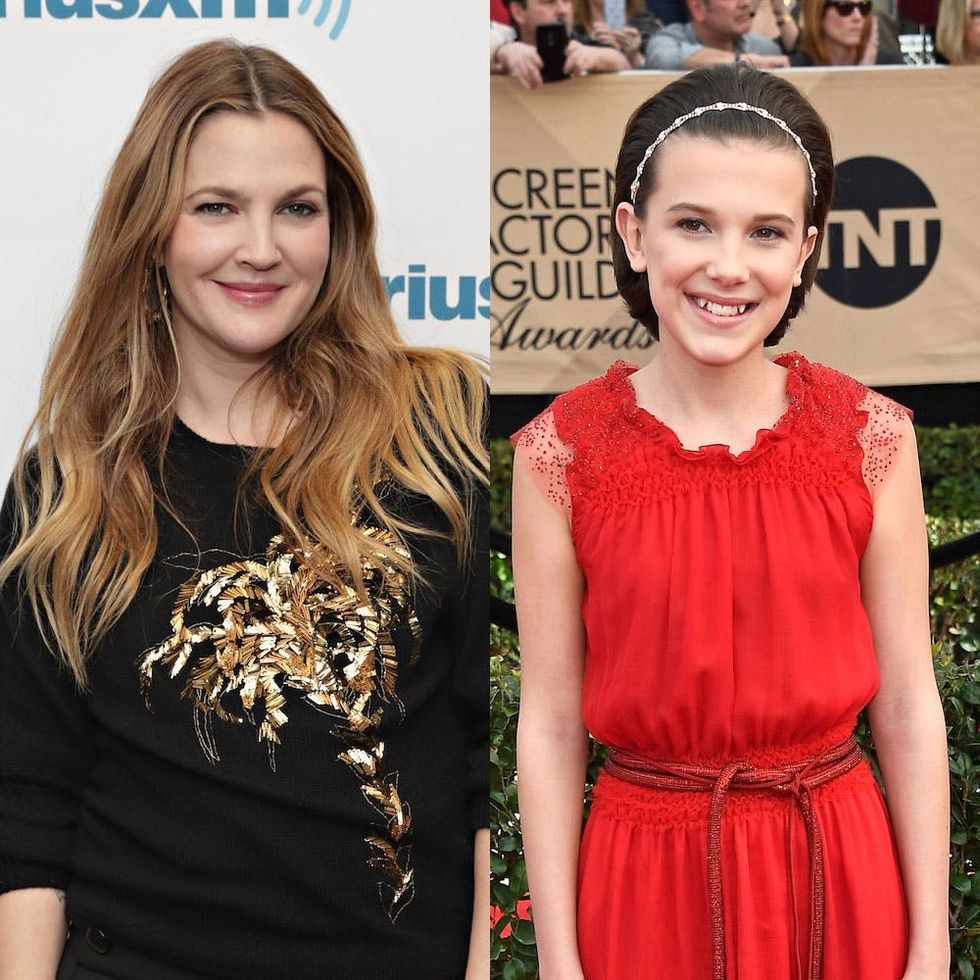 As Eleven on Stranger Things, Millie Bobby Brown gets to work alongside one of our favorite actresses, Winona Ryder. And now the young star is bonding with another Hollywood veteran, Drew Barrymore, who interviewed Brown for Teen Vogue about everything from the 13-year-old’s breakout role to what it’s like becoming famous at such a young age.

“I love Stranger Things,” Barrymore, 42, told the younger actress. “It’s full circle for me because it harks back to me playing Gertie in E.T. Both are about the sense of family, humanity, and suburbia. And both are so grounded in relatability. And you talk about space and aliens and the improbable and the impossible.”

Brown responded by revealing that Barrymore’s most famous childhood role (other than perhaps the creep-tastic Firestarter) was a major source of inspiration for the Stranger Things cast and creative team. “E.T. was a huge reference point for [Stranger Things],” she explained. “They wanted me to feel like an alien but also have genuine relationships, like the one with Mike.” (We can totally see that and we love it!)

It means badass in any language. #StrangerThings #Netflix

From there, Barrymore turned the conversation to the challenges of childhood fame, which both stars have experienced in different ways. “I grew up in a single-parent home where no one told me what was right or wrong. There was no parental [guide],” Barrymore explained before asking, “Do your parents talk to you about boundaries?”

#StrangerThings breakout actress #MillieBobbyBrown is our third and final cover star for #TheIconsIssue! 🌟Millie talks to her longtime idol #DrewBarrymore about instant fame, life in the spotlight, and being a child actor in the age of Instagram. 📱 Link in bio for more. 📸: @oliverhadleepearch

Brown affirmed that her family has provided strength and support as she navigates her newfound celebrity. “My mum helps me look my age. Like, I can play with makeup, but I can’t go crazy,” the teen shared. “She’s also like, ‘You can’t wear that crop top.’ My dad is security, while my siblings take care of my eating, keep me grounded, and make sure I get rest. We are a team.”

The Santa Clarita Diet star then asked what it’s like coming of age during the “social media boom,” to which Brown replied, “I don’t mind growing up during this time. I can live without my phone, Instagram, or any other social media accounts. I just want to act. That stuff does not distract me.”

Our favorite part of the interview, though, was when the two fan-girled over each other at the end. After Barrymore asked (with a cheeky nod to Brown’s show) if the young star had done any “strange things” recently, Brown adorably replied, “Good one. This interview is one of the stranger things that has happened to me! When I was told, ‘Drew Barrymore is going to interview you for Teen Vogue,’ I was like, OMG! I was freaking out. I don’t know if you heard, but I’ve been trembling on the phone this whole time!”

Barrymore had the best reply, saying, “Aw. As women, we just need to inspire each other,” which prompted Brown to suggest forming a girl squad. (Can we join?) The pair sealed the deal with Barrymore’s end note: “Gertie loves Eleven.”

Gertie loves Eleven. Eleven loves Gertie. And we love both of them.

Do you think you could’ve handled being a child (or teen) star? Let us know @BritandCo!