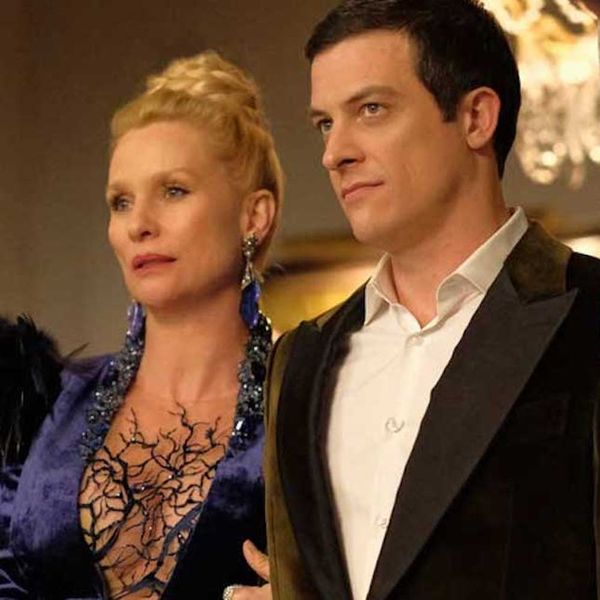 It was always going to be hard to top the outstanding pool fight between Alexis (Nicollette Sheridan) and Fallon (Elizabeth Gillies) on last week’s Dynasty, but this week’s episode, “Don’t Con a Con Artist,” was particularly mediocre.

The main thrust of the action centers around Steven (James Mackay) and Sam (Rafael de la Fuente) throwing an engagement party, and Alexis trying to break them up by framing Sam for shoplifting (which backfires thanks to Fallon). For whatever reason, Alexis has it out for Sam — she claims it’s because she doesn’t want to lose “another son” since he and Steven have plans to travel and then maybe settle down in South America.

The “another son” comment is a total con to get Steven to give her his money. She tells him about baby Adam being kidnapped and says that’s where all her money went, to hire people to find him. Steven falls for it hook, line, and sinker because he’s such a kindhearted soul, and he immediately vows to give his mother all the money she needs to find Adam. Oh, brother.

Fallon, who never would have fallen for that, is busy trying to take her mother down. She thwarts Alexis’ shoplifting frame-up and then tries to get her to spill her secrets by giving her champagne laced with a Molly knockoff. Unfortunately, the drugged drink ends up in Sam’s hands instead, and he gives a rather epic impromptu song-and-dance performance on the dining room table during the engagement party. But it all works out, because when Fallon accuses Alexis of drugging Sam, she has to cop to the shoplifting frame-up in order to deny the drugging charge.

None of this is terribly interesting, especially because it’s punctuated by Blake (Grant Show) having tantrums over his staff helping Alexis, which culminates in Anders (Alan Dale) telling Blake to figure out how he feels about Alexis and stop being such a baby.

What is actually much more interesting in the episode is the fact that Michael’s father has a rare form of leukemia and their family home is out in Clarke County, a place where Carrington Atlantic covered up something that most likely caused Michael’s father’s cancer. Cristal (Nathalie Kelley) figures this out on her own and is going to tell the Culhanes the truth, but Blake gets to them first, and you know he’s going to do everything he can to keep a lid on this.

That should be fun to watch. It’s also a good way to keep Michael involved in the Carringtons’ affairs now that he has quit his job. And speaking of affairs, things got just the tiniest bit steamy between Liam (Adam Huber) and Fallon after he saw what lengths she would go to to protect her brother. She’s definitely intrigued by her fake husband, which means it will be all the juicier when the other shoe drops and it turns out he’s this mysterious “Chad” person.