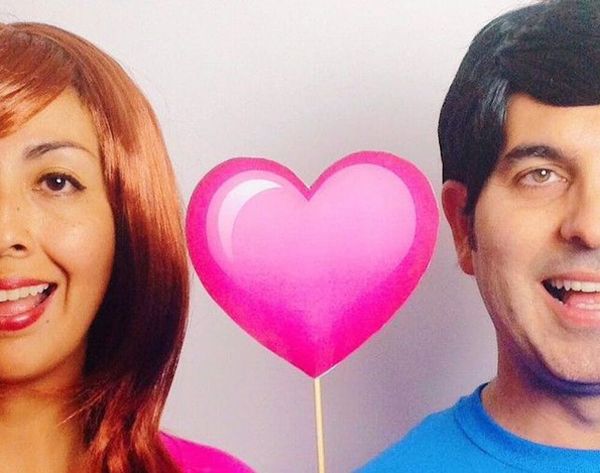 It’s official: Emoji are no longer just for texting. The lovable icons are doing a solid job on their quest toward world domination — their most recent conquest? Halloween, of course. From the heart-eyed kitty to that yummy-lookin’ slice of pizza, all your go-to texting icons showed up in costume form this past weekend and you guys made ’em look freakin’ awesome. Take a peek at 20 of our favorite emoji costumes from Halloween 2014.

1. Happy Haircut: Appropriately, this hairstylist chose the emoji getting a haircut as her look for the day. We are so making emoji printable headbands next year. (via @hairbytt)

2. City Slickers: We’re pretty sure if we were looking out over this view, we’d be making the exact same faces. (via @alessandrac7)

3. Creme de la Creme: All your favorites are here – even the freshly hatched chick. (via @ingitesma)

4. Love Kitty: This look is so adorable and easy we’re kind of kicking ourselves for not thinking of it first. (via @chelsrose)

5. Masked Emotions: Looks like things are getting pretty emotional at this office. (via @rupampatheja)

6. Monkeying Around: We’re pretty sure if a friend sent us this picture, this would be our exact response. (via @sbaicker)

7. Emoji Match Made in Heaven: So clever and so easy. Props to these guys for their subtle emoji pins that helped make their costumes more obvious. (via @rachellahr).

8. Scary Grannie: We’re pretty sure this translates to “evil grandma” in emoji language, which is a little bit terrifying, but then again so is Halloween. (via @moremanntiss)

9. Emoji Get Together: Group costume FTW. This crowd is looking a whole lot like our “recently used” emoji keyboard. (via @doriegolkin)

10. Glamorous Geishas: These gal’s kimonos look awesome just on their own, but with the colorful shirts on top they are totally emojified! (via @tiffanymchao)

12. Dancing Ladies: The dancing ladies were definitely the most popular emoji of the night. These pretty gals used the Brit + Co tutorial to transform themselves into the digital duo and we have to say they did a darn good job. (via Adrian Anne + Rachel Saxon)

13. Dancing Fellas: Major kudos to these guys who sacrificed pants for a solid costume opportunity. Hey, if you have the legs for it… (via @zorikp)

14. Fashion Love: We’re totally obsessed with this fashionable take on the classic heart-eyed face. This outfit is wearable, obvious and totally adorable. (via @lalalalexi07)

15. Purple Devil: She’s looking awfully happy to be so evil… (via @ashlielanning)

16. Pizza and Co: Not sure how we feel about these two things being in such close proximity to each other, but their costumes are awesome nevertheless. (via @ignitesma)

17. Dark Side of the Moon: This guy stayed stealth like the moon in a dark trench coat and the perfect mask. (via @srdav)

18. Total Package: Tech costume of the year goes to this guy, who showed up not only as an emoji, but also a text message. (via @thefranctorres)

19. Epic Emojis: Looks like these two couldn’t pick just one. Instead they opted to portray a whole range of the curious icons. (via @jacst.b)

20. Iconic Couple: True love means dressing up as a virtual couple for Halloween. We‘re in love. (via @pabelonastudio)

Which of these emoji costumes do you like best? Did you dress as an icon for Halloween? Tweet us a pic!