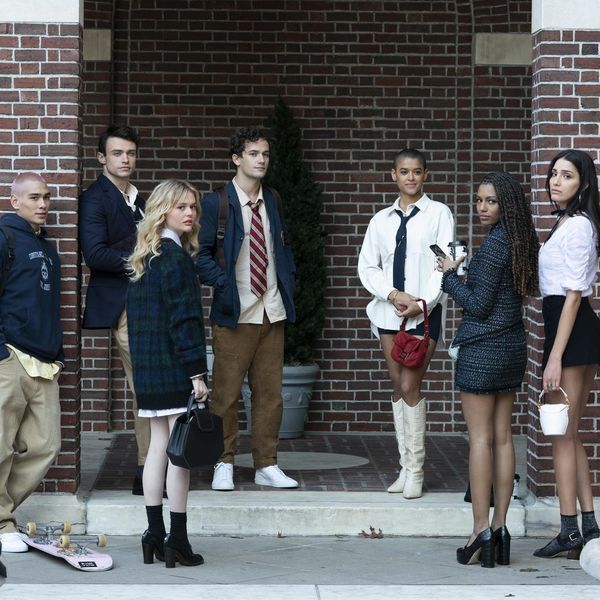 When HBO Max announced that they were going to be dropping a reboot of the original Gossip Girl, which aired on the CW from 2007-2012, we got very, very excited. From fashion inspired by the original show to Blair Waldorf-approved home decor, we really do love our Upper East Siders. Since the new series means a new slew of characters, here's your go-to guide to the ruling class, outsiders, and faculty who now grace the halls of Constance Billard. (Mild spoilers ahead!)

Constance Billard's new queen bee Julien (Jordan Alexander) is a powerful yet insecure influencer who's determined to cement her brand. She's also keeping a secret from the rest of the group, but it doesn't take long to uncover it. Alexander has previously starred in Facebook Watch's Sacred Lies.

Zoya (Whitney Peak) might be the new girl as Constance Billard, but she also has unexpected ties with the it-crowd. Because of her economic status, the ruling clique, aside from Julien it seems, is suspicious of her. Before Gossip Girl, Peak starred on Home Before Dark on Apple TV+ and Netflix's Chilling Adventures of Sabrina.

Part of the group that Julien refers to as the "guilty rich," Obie (Eli Brown) is the son of real estate moguls, and the wealthiest of the group, even if he doesn't flaunt it. He brings food to picketers outside his parents' newest development, and begins to feel unsure about his relationship with Julien. You can also see Brown on Netflix's Spinning Out and Freeform's Pretty Little Liars: The Perfectionists.

Kate (Tavi Gevinson) is at the end of her rope. After taking a job at Constance Billard in the hopes of teaching exceptional students, she finds herself bullied by them instead. With a few of the other teachers, Kate concocts a plan to keep the teens in line. Gevinson is the editor of Rookie and also starred in the film Person to Person.

With a classy style and fierce attitude, Audrey (Emily Alyn Lind) is definitely channeling Blair Waldorf. She's not exactly enthusiastic about becoming friends with Zoya, and even though she's in a long-term relationship with Aki, according to Deadline, she's "beginning to wonder what more could be out there." You can also see Lind on Facebook Watch's Sacred Lies and Netflix's The Babysitter and The Babysitter: Killer Queen.

Audrey's long-term and charming boyfriend, cool kid Aki (Evan Mock) decides to explore his sexuality with Max and Audrey. While this is Mock's first acting gig, he's an established skater, model, and is launching fashion label, Sorry In Advance.

Max (Thomas Doherty) is a "debonair man about town," according to the official Gossip Girl Instagram. He has an insatiable desire for, well...everything, and catches the attention of both Audrey and her boyfriend Aki. Doherty previously starred in Disney's Descendants series and Legacies on The CW.

One of Julien's best friends, Luna (Zión Moreno) is fashion-forward, bold, and keeps tabs on everyone's secrets. You can watch Moreno on Netflix's Control Z.

Powerful and prestigious, Monet (Savannah Lee Smith) is Julien's other BFF. She takes part in terrorizing anyone who gets in their way, including the faculty and underclassman. It's not long before Monet decides that includes Zoya. This is Smith's acting debut.

Are you excited for the new Gossip Girl? DM us your hot takes on Instagram!

Brit + Co Editorial Assistant, Swiftie | Chloe is from the Outer Banks of North Carolina (yes, like the Netflix show!). When she isn't writing or updating her blog Pastels and Pop Culture, Chloe enjoys watching Marvel movies or texting her sister about the latest celebrity news. Say hi at @thechloewilliams on Insta!