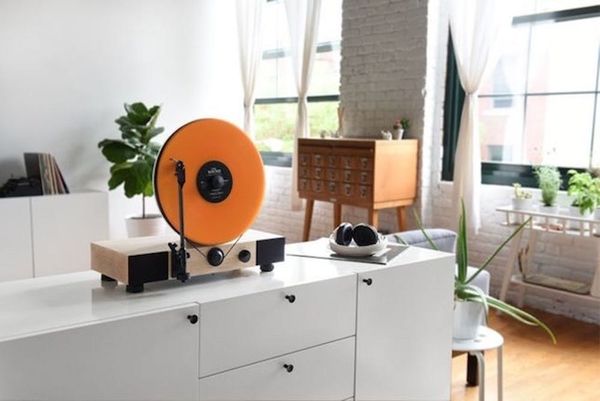 You’re going to want to sit down for this one. There was once a time when neither MP3 players nor digital music existed (gasp!). Long before people settled in front of their iPhones to digitally stream their favorite summer anthems from Spotify, they used ancient artifacts called turntables to play vinyl records. Many Gen Y-ers today have never operated a turntable themselves, and might never have had the opportunity to experience vinyl music — until now. Chicago-based Gramovox is bringing the turntable out of the musical dark ages and into the hands of modern audiophiles with its Floating Record Vertical Turntable.

The Floating Record is not your grandmother’s turntable. This high-performance turntable plays vinyl records vertically through its belt-drive system, balanced tonearm and built-in, full-stereo speakers for superior bass quality. As the vinyl spins and maintains high-quality playback, it also creates the impressive illusion of a floating turntable. Unlike traditional turntables, you don’t even have to purchase cartridges or additional gear like amplifiers or receivers. Everything you need is included in the turntable’s integrated design, so you’ll be spinning tracks like David Guetta in no time.

Whether you’re a first-time vinyl listener or an experienced vinyl enthusiast, the Floating Record’s vertical design allows you to show off your vinyl rather than hide it like a traditional turntable does. And because the Floating Record requires fewer components than traditional turntables, you can save all that extra space to build a rad new vinyl record collection.

You can even choose the rotational speed at which you want to play your records (33 1/3 RPM or 45 RPM) by moving the silicon belt over the inner or outer groove of the middle gear. If you prefer to use your own audio setup, bypass the built-in speakers and use the Floating Record as a standalone, HiFi turntable (who’s up for a vinyl record party?). However you spin it, we think Gramovox is going to breathe new life into a bygone era of music.

If you want to help the next generation of audiophiles experience vinyl music, check out Gramovox’s Kickstarter campaign. You can pledge as little as $1 for exclusive offerings from Gramovox, or $329 for a Floating Record of your very own.

Do you own any vinyl records? Let us know in the comments below!

Manasa Reddigari
Manasa is a freelance writer with a passion for the weird and wonderful technologies that are transforming life as we know it today.
Kickstarter
Tech
Kickstarter Music vintage
More From Tech