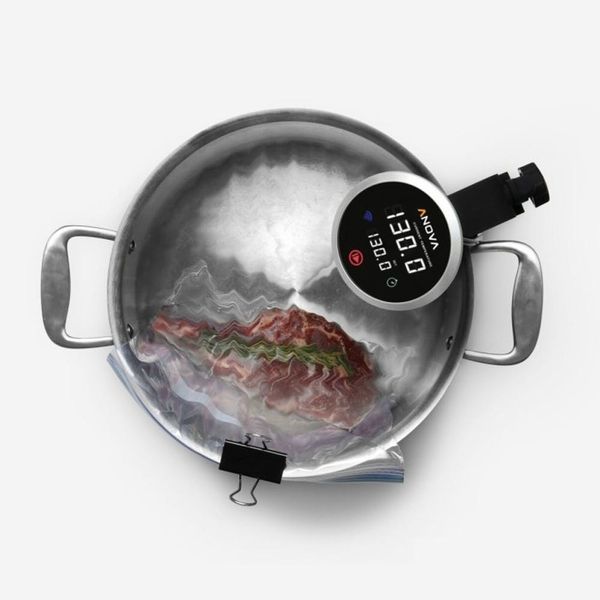 One of my guilty pleasures is watching movies about chefs because you learn so much about food, but what’s more, you learn different cooking techniques like sous vide. I heard about it primarily from that scene in Burnt with Bradley Cooper, but I thought it was only used in fine dining. That’s why when I was contacted to review the Anova Precision Cooker ($128), which allows home chefs to use the technique, I jumped at the opportunity.

What Is Sous Vide?

Sous vide is a French cooking method that translates to “under vacuum.” As you probably guessed, the ingredients are cooked in vacuum-sealed pouches or containers that are submerged into a water bath. The way it works is that the ingredients are heated low and slow to ensure that everything is cooked evenly. The process is popular because it prevents food from overcooking and guarantees the juiciest results possible. Though it’s often used for meats like steak and fish, it can also be used for eggs and veggies. I also discovered that it can be used to make desserts. The Anova Precision Cooker is a Bluetooth-enabled sous vide device that pairs with the Anova Culinary app, which features guides and recipes. The app helps you control the device from your smartphone from preheating to cooking, sending you notifications along the way.

When I first pulled the Anova Precision Cooker out of the box, I wasn’t sure where to start, but after downloading the app, I grew more at ease scrolling through the guides and recipes. I selected this recipe and got to work. After seasoning my salmon fillets, I placed them in storage bags with a homemade marinade. The device was already clamped to my pot and plugged in. With binder clips, I attached the bags of fish to the side of the pot and pushed start. That’s when I realized I should have pushed it before I started seasoning so that the Anova Precision Cooker could preheat to the specified temperature, but it was okay. Once it reached 110 degrees Fahrenheit, I received a notification on my phone saying that it was time to set the timer. Forty-five minutes later, I received another notification informing me to proceed to the finishing steps that included patting the fillets dry and cooking them in a pan. I finished mine in a cast iron skillet, because I wanted them to have a good crust on the outside.

Results: Not only did my salmon have a crust like I wanted, the pieces were unbelievably flaky. And the teriyaki, orange, and ginger marinade was super flavorful. It seemed like it seeped into the crevices and I could taste all of the ingredients in each bite. Success!

Full disclosure: I mainly cook steak for my husband. It’s not that I don’t like steak, I just really have to be in a mood for it. That said, I wanted to cook steak using the Anova Precision Cooker because there’s a battle of two steak temps in my household. My husband likes his steaks medium rare, and I like mine medium. Because of that, I found a simple garlic recipe on the Anova app and cooked four steaks in the water bath for two hours at 129 degrees Fahrenheit. According to the guide, that’s the temperature for a medium rare steak. When it was done, I finished them in my cast iron skillet.

Results: When I sliced into the steak, the center was pink in the inside, which is how my husband likes it. After browning all of the steaks in the skillet, I let mine cook in the leftover marinade a little longer. I paired the steak with a cauliflower puree drizzling sauce on top. The steak had a slight pull when I broke off pieces to scoop up with the cauliflower, but it was very easy to slice into. That was something my husband noticed immediately when he tried it. He gave it his highest stamp of approval saying, “It tastes like I cooked it.”

Is it just me or does crème brûlée sound fancy AF? That’s what I thought when I saw the dessert on the app and knew I had to make it. I whisked all of the ingredients — heavy cream, eggs, sugar, and a pinch of salt — together and placed the mixture into two mason jars before submerging them into the water bath. I was supposed to let it chill for just two hours, but I let it chill overnight because I decided to eat it the next day.

Results: When I licked the back of the spoon after transferring the custard from the mason jar to an oven-proof ramekin, I couldn’t believe that I made it. However, I didn’t have a butane torch for the sugar coating so the crème brûlée just wasn’t the same. I will be buying one promptly just for this recipe though.

If you like cooking, you know how important it is to prep and plan your meal. The difference with cooking in a pan only and cooking with the Anova Precision Cooker is that prepping was the most time-consuming part. The benefit of the device is that my choice of protein only needed to be in a skillet for a couple of minutes and my meal was complete.

I also enjoyed the ease of the app, knowing that I could place my meal into the water bath and go about my day. This will definitely be helpful on those nights when I have to cook, shower, and iron for the next day. I also liked that each meal I made was incredibly tender and flavorful. I’m already thinking about which recipes I want to make next with this device.

Would you ever use a sous vide device? Let us know @BritandCo.

From Your Site Articles
Yasmein James
Yasmein James is a food writer living in New Jersey, but her heart’s on the other end of The Lincoln Tunnel. When she isn’t writing, you can find her eating her way to the most authentic ethnic restaurants in her travels. And writing all about it on her lifestyle blog, She’s Facing Freedom.
Adulting
Food Adulting
Adulting Kitchen Kitchen Gadgets Kitchen Tools
The Conversation
More From Food Adulting