Why Topo Chico Is the Sparkling Water to Sip 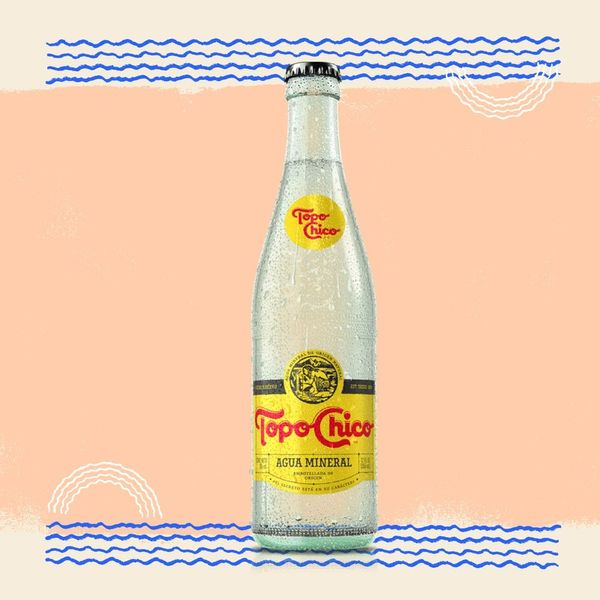 Welcome to our new food series called Eat It Up, where we share the kitchen gadgets and foods that we can’t live without.

Before La Croix became a cultural phenomenon, inspiring Halloween costumes, debates about its correct pronunciation, and cocktail recipes galore, it was a low-key player in the soda world — the affordable Perrier alternative you bought at the supermarket and a seltzer you were excited to see on a Delta flight. Because we *all* love to know about cult favorites before they make it big, here’s another sparkling water you need to sip ASAP: Topo Chico Agua Mineral ($18/12 glass bottles). You may have seen it next to glass bottles of Mexican-imported Coca-Cola in fridges at taquerias or grab-and-go Mexican restaurants. Or perhaps you’ve overheard a friend order a Topo Chico and wondered… Topo whut?

The unofficial best sparkling water for Aires has been bottled at the source in Monterrey, Mexico, since 1895, but it’s just now becoming the go-to beverage for foodies, largely due to its wider distribution. Coca-Cola purchased the brand for $220 million in fall of 2017, so up until then, Topo Chico was predominately sold in Texas. Now the clear glass bottles are bubbling up everywhere in the country including larger grocers like Walmart, with sales increasing 30 percent in the first quarter of 2018. La Croix and Waterloo have been our go-to options for flavored varieties, but our seltzer-obsessed selves cannot get enough of the plain Topo Chico. Here’s why.

Topo Chico has a bright, clean finish without any weird metallic aftertaste (it’s bottled in glass as opposed to aluminum). The drink is extra fizzy — seemingly more so than other sparkling waters — and gives you the satisfaction of a soda, minus the sugar and calories. Due to the water’s natural mineral composition (which includes sodium, magnesium, calcium, potassium and manganese) and carbonation (only some extra CO2 is added to restore what is lost during the bottling process), Topo Chico claims it alleviates indigestion and dehydration. We’ve found even the greasiest food won’t cause tummy troubles if consumed with a Topo Chico and that the water makes for a thirst-quenching post-workout drink.

If you’re wondering where the name originated, Topo Chico’s a healing spring in Monterrey, Mexico. To paraphrase the Legend of Topo Chico on the drink’s website, during 15th century Aztec rule, travelers spoke of a healing spring. When emperor Moctezuma I’s daughter suffered a seemingly incurable disease, he ordered priests to find this miraculous source of water. Eventually they discovered Topo Chico and brought the princess there to drink the water and bathe in it. Story has it, the water rejuvenated her, and she returned back to the kingdom strong, joyful, and refreshed. News spread of this, and for generations, ailing people traveled there in hopes of similar relief.

While you might be tempted to fill a tub full of the prized water, we recommend drinking the chilled Topo Chico straight out of the glass bottle (then turning the caps and glasses into jewelry, cups, and other Etsy crafts). Topo Chico is also excellent in cocktails, used as a substitute for club soda. We’ve seen mixologists finish their drinks off with Topo Chico in Austin, Texas and even as far west as Off the Grid in San Francisco. But why reserve Topo Chico for only the day and night? You can imbibe the mineral water for breakfast too by whipping up a Topo Chico iced coffee.

Anna Monette Roberts
As Brit + Co's Food Editor, Anna Monette Roberts has an insatiable appetite for developing tasty dishes. When she's not dreaming about her next meal, she's . . . well, probably cooking up her creations. Her favorite foods include chewy chocolate chip cookies, Rosé Champagne, and gooey French cheeses — in no particular order.
Eat It Up
Food Adulting
Eat It Up Goods Grocery Shopping
The Conversation
More From Food Adulting