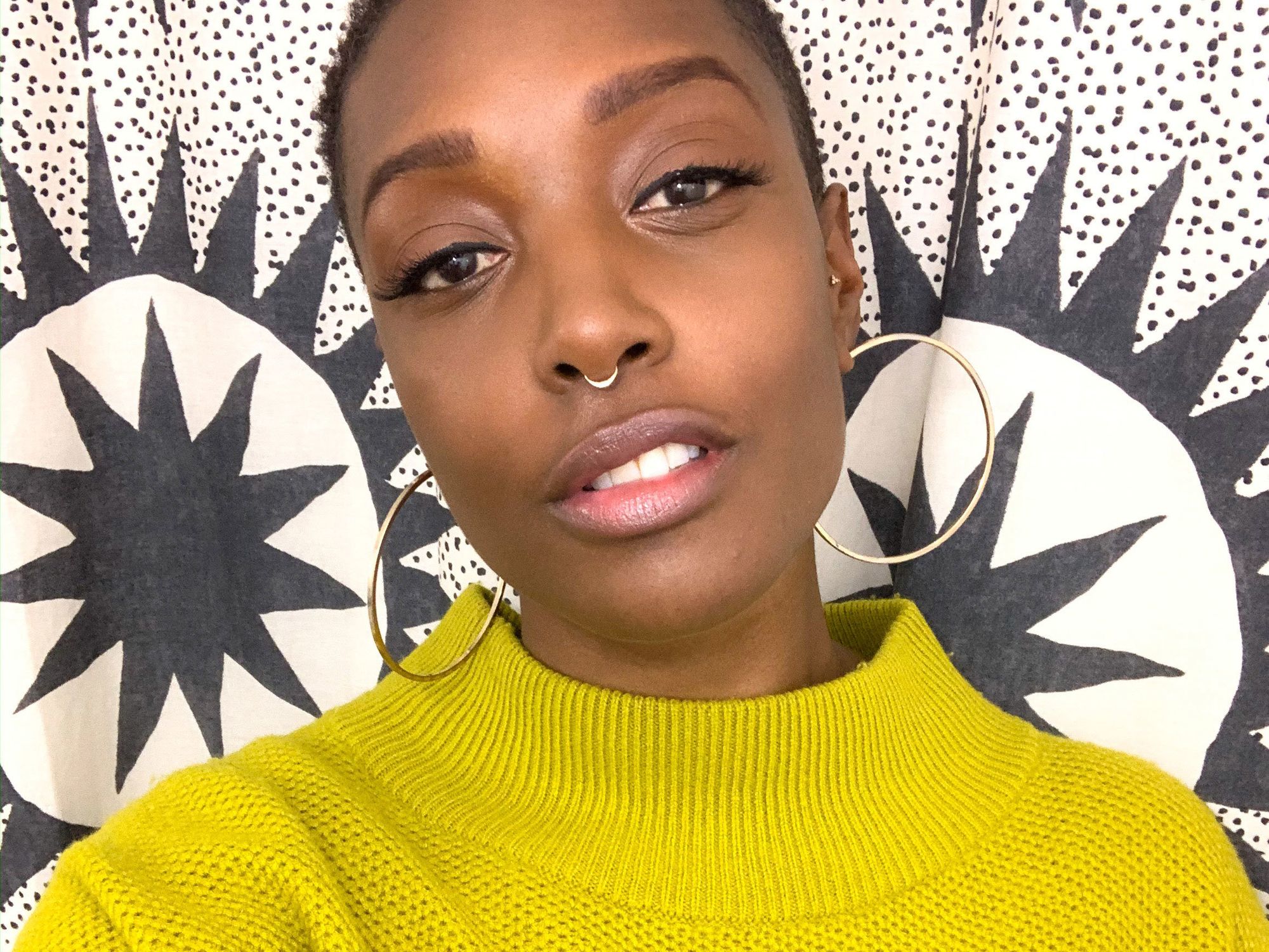 Editor's Note: This interview took place before recent events so does not specifically cover the Black Lives Matter movement. For more information on how you can support as an anti-racist ally, visit blacklivesmatter.com and blackfutureslab.org. We are committed to learning, acting and amplifying black voices in our community.

To us, the core of creativity is courage. Right now, it's about having the courage to do the right thing. To speak up, to have uncomfortable conversations, to know that it's not enough to not be racist, we must be anti-racist. And it's our job to use our platform to become stronger allies in every way we can. For this edition of Creative Crushin', we're thrilled to share the journey of comedian and activist Franchesca Ramsey.

Anjelika Temple here, co-founder and Chief Creative Officer of Brit + Co. I am so excited to share the story and work of today's crushworthy creative, Franchesca Ramsey who I had the privilege of spending a morning with over Zoom ;)

Known for her viral video Shit White Girls Say to Black Girls, Franchesca's unique power is her ability to combine important, tough topics with humor and music in an effort to drive people to learn, take action, and gain a deeper understanding of issues like race, homophobia, and sexism.

Anjelika Temple: You're known for socially conscious comedy, a unique combo of cultural commentary and entertainment. Tell us about the spark moment when you knew your work was resonating with people.

Franchesca Ramsey: I was working as a graphic designer, and making YouTube videos on the side for six years, making songs about student loans, sketches about homophobia and sexism, videos about healthcare. I was doing all these things and building a little audience. Then in 2012, I had my first viral video, which was 'Shit White Girls Say to Black Girls'. And I was working as a designer at the time. When that video went viral, I got an agent and I quit my job, and suddenly I was getting auditions and all these opportunities. That was the moment it crystallized for me that I'm actually really good at this and started narrowing my focus. I started being like, "Social issues and comedy is working for me and no one else is doing it. So, I might as well keep doing it".

AT: What advice do you have for creatives who are trying to find their voice or figure out their unique take?

FR: I think the moral of my story, and any time you hear about successful people in entertainment, is that it takes a lot of time. You don't wake up knowing what your voice is. You don't wake up knowing what your unique take is. And I think, especially right now when we're all in quarantine and some of us have this excessive amount of time on our hands, people are just making stuff and trying stuff. And I think that that's the only way you're going to figure out what your voice is. If you're a writer, you have to write. If you're a musician, you have to make music. If you're an actor, you have to act. So, trying lots of different things and seeing what didn't work, that doesn't necessarily mean that it's not the right way to do it. But, how can you learn from the thing that didn't work and then look at what's working elsewhere?

You can definitely break out doing something different, but there are certain things that work. So, it's looking at what's working and finding your unique take on it. How can you change the conversation? What can you add to the conversation that no one else can? And that just takes time and practice. You're going to get it wrong a lot.

AT: You've described yourself as an accidental activist. Tell us more about the journey that led you to that role.

FR: I think just as a woman, and as a black woman, there are conversations that I can't ignore and that I am being forced to have with my friends and my family and my community all the time. So, I don't necessarily think that that makes someone an activist, but just as an empathetic human, I care about the world.

When it comes to labeling myself as an accidental activist, when 'Shit White Girls Say' happened, I never could have anticipated the conversations that would come out of that video. I did my first national television interview with Anderson Cooper. People wrote term papers about me. I was being invited to speak at colleges to people in studies that I had no qualifications. My degree was in graphic design. And I was like, "What? You want to talk to me? About what?" So, suddenly I was getting hate mail and fan mail from people that were asking me for advice, spilling their hearts to me. And I think in that moment, I could have said I'm not doing this. That's not my job. But, instead, I thought people really believe in me and people are inspired by what I'm doing, and so I felt compelled to just be like, "All right, I'm going to do this".

What I realized through 'Shit White Girls Say' is, I'm really good at crystallizing an idea into the CliffNotes, funny, bite-sized version of it. So, I just started doing that. Anytime I'd learn something, I would just say, "Oh, this is really interesting. No one's talking about this. How can I make an analogy about Game of Thrones that helps you understand this? Or, what song can I change the lyrics and make them about this topic?" So, I became this person who resonates with people, which I'm very thankful for. But, sometimes it feels overwhelming because I did not decide that this was what I was going to do. I fell into this.

AT: In recent years, the pressure to be productive and do *all the things* has skyrocketed -- and the current global crisis is only making it harder and more stressful. Hw are you striking the balance between your own mental health and the pressure to check off all of those to-dos? What advice can you share?


FR: I try not to be too hard on myself and I encourage people to not set out to do all the things. While some of us have more free time, we are going through a global mourning period. And I think a lot of times, if you're not seeing it personally with your friends and family, it's hard to wrap your mind around the fact that the uncertainty of the world, the news cycle, all of that stuff can make you feel depressed and anxious. And that's a really difficult time to be productive or creative when you have all that going on. So, what I try to do... One, I'm doing therapy remotely. That's constant. It's super important. But, I'm also reframing what productivity looks like for me. So, before the pandemic productivity was working out four days a week, and going on X amount of auditions, and getting all this writing done, and going out, just building my plate with all these things.

Today's productivity is like a long walk with my dog and a long phone call with a friend. And maybe I have one meeting. Maybe I have a writing session with my writing partner. I bought a treadmill; I'll walk 20 minutes on it. I used to be in the gym like, "Yeah, 90 minutes. I'm killing myself". And now I can't get myself motivated to workout at home. So, if I can just do 15 minutes on the treadmill or a 10 minute YouTube video, I'm like, "I did it. I did something". So, I think changing what productivity looks like for you and also giving yourself time and space to do nothing. I've been rewatching Sopranos and it's the highlight of my day. I'm doing one episode a night, maybe two. And I'm like, "Great. Now I can go to bed. I had a great day".

AT: What does your support system look like? Tell us about the community-oriented tools and groups that help you thrive.

FR: I saw a quote that said, 'Behind every great woman is a group chat'. And it's so true. I have a few different group chats with different friends from different parts of my life, but it's great. We do a regular Zoom. We've been doing one once a week, which has been really nice. I have one that I do with two girlfriends after Insecure every Sunday, and we just talk about the show as soon as it's over. I talk to my mom almost every day, if not by phone, by text. I also adopted a dog! His name is Flex. When the pandemic happened, I realized I was alone I was alone and needed somebody. And it has changed my life. It's consistency. He's my schedule. We wake up at the same time. We go for a walk at the same time.

AT: What recent or upcoming projects should we keep our eye out for?

FR: I just did a fun collaboration with Bumble where I was able to virtually sit down with actress-author-activist June Diane Raphael. We talked about everything from mental health to vulnerability and how we're both dealing with the realities of social isolation. It was a really great conversation, especially considering that June and I had never spoken before! The audio from our chat is over on Bumble's site, and June and I are each doing a series of one on one networking sessions through Bumble Bizz and Bumble BFF which I'm super excited about. At a time when many of us are social distancing, having a sense of community feels more important than ever, so I'm really glad that Bumble is making that possible.

AT: And finally a classic: Tell us 3 pieces of advice you'd give to your younger self.

FR: Don't compare yourself to anyone else. Your journey is your own.
Floss.
As much as it sucks to admit, mom was right.