Dear HR: How to Make Your Company Culture More Like Google and Pixar 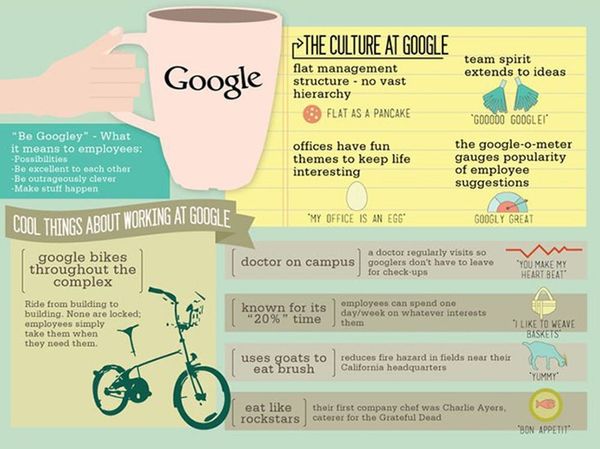 What do Google, Pixar and Patagonia have in common? Besides all being HQ-ed in or a train ride away from Silicon Valley, the three organizations are all masters of company culture. Those buzz words that refer to the unspoken practices that permeate from New Hire to Big Wig and every title in between are touted as what’s largely responsible for transforming the daily grind into a creative mecca where ideas and innovations flourish because employees can. And while many of these companies’ secrets to success are kept under lock and key until they’re primed for a grand reveal, a new infographic lets us peek into what 9-to-5 life is like for Googlers, Pixar stars + Patagonians.

While each company has its own unique mindset — from Pixar’s fairy tale marriage of tech + art to Patagonia’s mission to give the mother earth heaps of TLC — they ALL give their employees the tools, space and support they need to get the job done extraordinarily. But we’re not just talking about laptops, a shiny standing desk and on-call IT. The perks largely focus on what happens when you’re not typing up code, sorting spreadsheets or churning out content. That ranges from accommodating flexible work hours and free lunches (trivia: Google’s first company chef was the caterer for the Grateful Dead = bonkers!!!), developing more engaging and collaborative workspaces like the tricked out huts that double as Pixar’s animator’s cubicles and giving employees the thumbs up to step away from the monitor and into Child’s Pose in exercise areas like you’d find at Patagonia.

What’s more exciting is that these companies actually care about fostering a creative way of life outside of work: Patagonia allows its team to take TO to pursue balance or volunteer while Google is known for it’s “20% time” when employees can take a day to turn off their Androids just to DIY.

Have your notepad at the ready while you read through these infographics — you’re gonna want to send HR a few pointers once you’ve read that Pixar has a giant room that’s just full of cereal. Why? Because it makes their crew happy, and that attention to detail is what it takes to turn worker bees into company cheerleaders. (Psst... want to Rah! Rah! for OUR uber creative company!? Then peep what it’s like to live what you love at Brit + Co! Besides being surrounded by makers + MakerBots and working in a technicolored office space, we’ve got some sweet perks of our own ;)

What’s the company culture like where YOU work? What set up allows you to be most productive? Most creative? Tell us in the comments below!