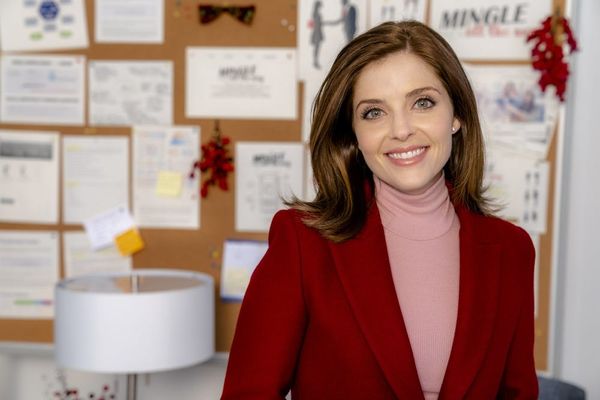 We look forward to the Hallmark Channel’s “Countdown to Christmas” lineup all year. There’s just something about the feel-good films that makes us, well, feel good. And 2018’s slate features literally dozens of new movies, including Mingle All the Way, which premieres Saturday, December 1. It stars Brant Daugherty and Days of Our Lives actress Jen Lilley, who has appeared in several Hallmark Channel originals from other seasons but is making her “Countdown to Christmas” debut this year.

Below, Lilley tells us more about her holiday traditions, what to expect from Mingle All the Way, and a new project that’s close to her heart.

Brit + Co: Why do you think people love Hallmark movies so much, especially around the holidays?

Jen Lilley: They’ve become just such a key part of everyone’s holidays, and I think one of the many reasons Hallmark Channel is so successful, in general, is that there’s just so much tension going on in our society and around the world. Right, left, front, center, whatever you are, there’s racial tension, there’s political tension, there’s economic tension. And it’s so nice to have a channel that really is empowering and uplifting and happy and safe for everyone of all ages. I think that’s one of the keys to their success.

B+C: You’ve done several Hallmark Channel original movies now. Do you have a favorite of the ones you’ve done?

JL: Obviously they’re all rom-coms, and they’re all very on brand with Hallmark. But each character is so unique that I can’t really pinpoint which one is my favorite. A Dash of Love has a really special place in my heart, though, because 1) it was my induction into the Hallmark family, which was really a dream come true for me, and 2) Valentine’s Day is my favorite holiday. And Frank Sinatra’s “The Way You Look Tonight” was in that movie, and that’s my favorite song, so that was really amazing for me. But they’ve all been amazing. I haven’t had any mediocre experiences. I’ve done one for each season, so they’ve all had their charms.

I’m really excited about Mingle All the Way. Obviously I love Christmas, I love Christmas music, and the idea of becoming part of someone’s positive memories from Christmas because they watch the movie — I think that’s the greatest thing.

B+C: Mingle All the Way is such a good title. So what should we expect from the movie?

JL: It obviously follows the rom-com formula we all love, but it’s a little outside the box. My character Molly creates an app for entrepreneurs who are really focused on their work and don’t necessarily want a relationship but need a platonic plus-one for all of the holiday parties they get invited to. If it’s not a real app, it should be. The funny thing about Molly is that she has zero interest in signing up for her own app. And her assistant, Tyler, played by the amazing Casey Manderson — I don’t know if you know who Casey Manderson is, but you’re about to, and I think he is just God’s gift to humanity — he signs Molly up. And Brant Daugherty’s character, Jeff, signs up because he needs to impress his boss. And then of course, love ensues.

B+C: And you have two songs in the movie, correct?

JL: Yes! Years ago, I came out with a Christmas album called Tinsel Time. It was just a pet project for me, but it ended up going to number one on Amazon! So now two of my songs, “Tinsel Time” and “Jingle Bells (Reprise),” are in Mingle All the Way. And that Christmas CD is what led me to record a regular studio album.

B+C: What can you tell us about that album?

JL: It has a retro vibe, it’s very empowering, it’s music that is going to uplift and be really cathartic for people. One thing that my producer Adrian [Gurvitz] worked with me a lot on is the art of storytelling. And he really explained to me, you know, it doesn’t matter if you hit the notes as much as it does if you’re telling the story well. Good music tells a story that people relate to. So hopefully it really takes people through a musical journey and a story where they come out on the other side and feel really empowered. Like, “I feel like I am worthy of being in a relationship or empowered to not be in a relationship. I’m comfortable with myself, and liking myself, and ready to give love.”

And there’s a philanthropic element, too. It’s music that gives. My first single, “King of Hearts,” came out in October. And through that, we were able to raise money for a young boy in Uganda to have life-saving heart surgery. It was like such a little Christmas miracle. So I donated to Project Orphans for the single, and then going forward, 100 percent of my share of the profits will go toward charities that focus on orphans and foster care, since that’s something I really care about.

B+C: That’s great. And very much in the spirit of giving for this season. Besides your tradition of going to Hallmark to pick out an ornament as a kid, do you have any current holiday traditions that are really special to you?

JL: Yes! I’m a foster and adoptive parent — I have a two-and-a-half-year-old who we’re still in the process of adopting, and we also have his little seven-month-old brother this year. So I’m super excited. My two-year-old is really into Play-Doh, so I’m really excited about making sugar cookies, because I feel like he’s going to pretty good at the cookie-cutter game, and pretty awful at the decorating game, and it’s going to be really fun.

JL: Yeah, exactly. The ugliest cookies are the best ones.

Do you have any special holiday traditions? Tell us @BritandCo!