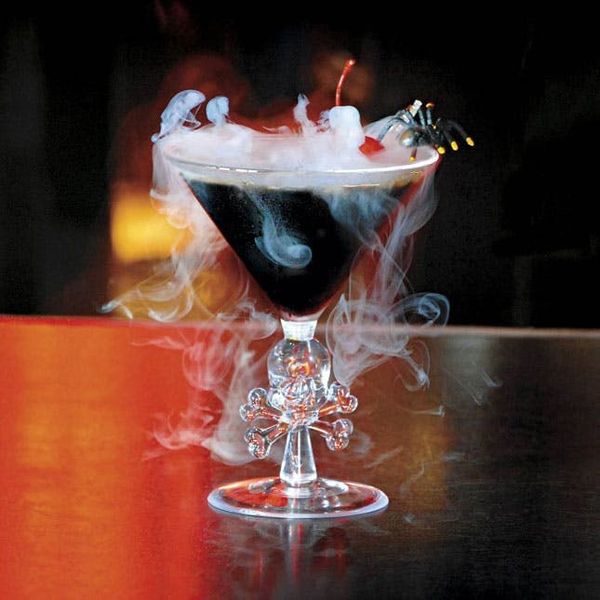 As it turns out, there’s no shortage of cleverly-titled, disgusting-looking cocktails on the Internet. From tapioca pearls that look like maggots to a completely curdled cocktail, people love getting their haunt on for Halloween. Here are 20 such cocktails for ghouls, goblins, and other ghastly creatures.

This looks seriously gross, don’t you think? It’s basically a remix on the classic gag shooter, The Cement Mixer. You mix Bailey’s with vodka and just let it curdle. (via Ministry of Alcohol)

Combining whiskey, applejack, and lemon juice, this cocktail is good for any fall fiesta. (via Sloshed)

Blood In, Blood Out

How weird is the name of this drink? It definitely creeps us out. The dry ice is key. (via Refinery 29)

The itsy bitsy spider climbed up the vodka spout. (via Talk of Tomatoes)

A twist on something a little more stormy, all you need is a pile of black decorating sugar to make any cocktail spooky. (via Food Network)

Cranberry is the New Black Cocktail

Did you know that black vodka exists?! (via Brit + Co.)

Technically, this is a mocktail. But add a little vodka and you’re all set! The tapioca and gummy worms are soooo slimy. (via Spoonful)

Punniest cocktail name on this list? Absolutely. And you can thank the fairy godmother of DIY, Martha Stewart, for that. (via Susan Tuttle Photography)

First of all, have you seen the movie this drink is named after? It includes a “Hail Satan” chant, so you best believe that it is pretty darn scary. Secondly, this punch looks awesome! (via Refinery 29)

Another win for Baileys. The curdles just keep ’em coming! (via TangoPango)

The genius move in this drink? Pickled baby BEETS! (via Martha Stewart)

This has to be the most disgusting name for a cocktail we’ve ever seen. Especially when you visualize the lemon peel as actual skin. Eeek. (via 12 Bottle Bar)

This sweet cocktail includes Whipped Vodka, which we absolutely love. Other than that, it’s just a bit of strawberry sundae syrup and teeth. (via Cooking with Sugar)

This simple mix of vodka, vanilla simple syrup, cream, and soda would make a great base for an ice cream cocktail float! (via Daily Noff)

Speaking of ice cream, the grenadine on this scoop gives us chills. (via Ministry of Alcohol)

On our quest to spike all things sweet, we’ve learned one very valuable lesson. You can infuse anything into vodka. Case in point? Candy corns. (via Brit + Co.)

Have a bottle of blue curaçao lying around from 4th of July 2009? Bust that bottle out and mix up this magical concoction. (via Celebrations at Home)

Created as an ode to the San Francisco Giants and Halloween, this dangerous drink includes two types of rum, all sorts of citrus, and blackberries. (via Brit + Co.)

Last, super creepy bubbles that kind of look like maggots. Cheers! (via Dabbled)
Anjelika Temple
As Co-Founder and Chief Creative Officer of Brit + Co, Anjelika Temple brings her voracious consumption of all things creative and colorful to DIY projects, geeky gadgetry finds and more. When she's not DIY-ing her heart out, you'll find her throwing dinner parties with friends or adventuring with her husband David, their daughters Anokhi and Indira, and their silly dog Turkey.
Food Recipes Roundups
Cocktails
Food Recipes Roundups Halloween Halloween Recipes
The Conversation
Reviews:
More From Cocktails