Go Island Hopping With This Guide to the Hawaiian Islands 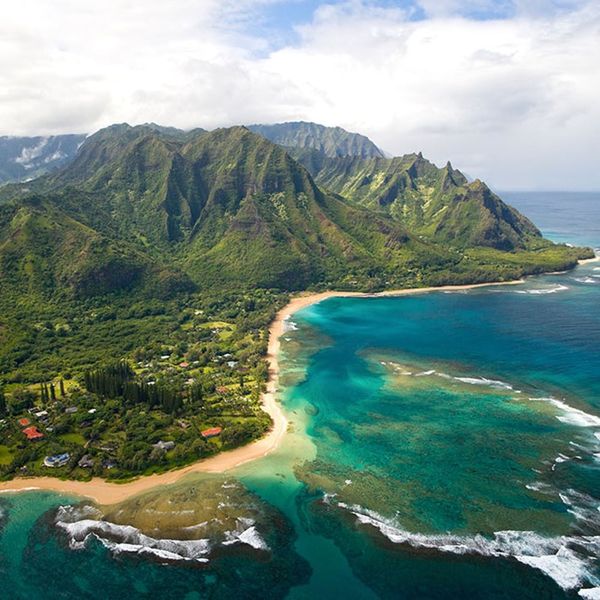 Though the state of Hawaii is always a popular vacation spot with its blue skies, Mai Tais, and swaying palms and luau dancers, less is known about the cultural and geographic differences that make up the chain of eight islands. But Hawaii is not merely a beach vacation; the 50th state has a rich cultural history that can be found in the cuisine, lifestyle, and traditions on the islands. From the cosmopolitan capital city in Oahu to the remote sea cliffs of Molokai, and from the luxurious resorts of Maui to the pristine gardens of Kauai, each island has a different flavor and identity. Read on for your guide to the Hawaiian islands so you can plan your next trip with the culture of each destination in mind — whether you’re after relaxation, adventure, or both.

97 percent of the island is preserved for conservation or agriculture so it’s especially picturesque, particularly along the dirt roads of Waimea Canyon known as “The Grand Canyon of the Pacific.” Be sure to visit the Tunnel of Trees (exactly what it sounds like) for an awe-inspiring immersion in nature. Book a Kauai ATV Tour to experience the cinematic, prehistoric-looking landscape à la Jurassic Park (sans life-threatening predators), and a Kauai Sea Tours catamaran sail to the Na Pali Coast, one of the world’s most wondrous vistas. If you’re traveling for the triple-digit likes, catch the sunrise on the South Shore at Poipu Beach before heading to the North Shore for the ever-Instagrammable sunset on Hanalei Bay.

Beverly Hills Island,” of which Wailea is its crown jewel. Home to a proliferation of five-star resorts along the South Shore (including the Four Seasons and Waldorf Astoria), Wailea is a must-visit for the glamour-seeking sunbather. If you’re more into whale watching than celeb spotting, head out on the water. Maui is famous for its humpbacks (though there are whales in Kauai too!). If you’re lucky, you might catch a whale breaching beneath a double rainbow — which, in these islands, is not as uncommon as you might imagine. But whales aren’t the only natural wonder to behold: You can’t leave Maui without touring the legendary Road to Hana, the island’s own stairway (or winding drive) to heaven.

Polynesian Cultural Center to dine luau style, catch a show full of dancing and blazing fire knives, or learn how the “Hang Loose” hand was created. The Diamond Head Trail Hike in Waikiki offers a panoramic view of the island’s juxtaposition of urban metropolis and breathtaking nature. But if you’re looking for some epic waves (and surfers catching them), head to the North Shore. Kauai isn’t the only island with an iconic North Shore, and this surfer’s paradise (the spectacular setting for Forgetting Sarah Marshall) lives up to the hype.

Four Seasons Resort Lanai. Far more remote than Oahu or Maui, and smaller and lesser-known than Kauai, this island is a hidden gem, and we predict it’ll soon become a hotspot for newlyweds and adventurous travelers alike. Book your flight now to get ahead of the curve.

Kapuaiwa Coconut Grove, one of the last remaining royal groves in Hawaii. The palms were planted during the reign of King Kamehameha V. in the 1860s; go at sunset for the most dramatic setting. Book a tour of Kalaupapa to hike the highest sea cliffs in the world — though, at over 3,000 feet above the Pacific, you might want to opt for a mule ride instead. The natural beauty belies a tragic past: The base of the cliffs was once home to an isolated leper colony, commemorated in Kalaupapa National Historical Park. This settlement is also visible at the Kalaupapa Lookout in Palaau State Park. Nearby Phallic Rock in the State Park is said to have fertility powers, so plan your visit accordingly.

The Big Island of Hawaii:

Tropical Botanical Garden. Set amidst an otherwise arid landscape, this 40-acre “Garden in a Valley on the Ocean” is a natural greenhouse filled with waterfalls and tropical flowers. Visit the art gallery at the Mauna Kea Beach Hotel to see an impressive array of Pacific, Asian, and Oceanic art, including historic Hawaiian quilts handmade in the 1960s (the same decade the resort was founded by Laurance S. Rockefeller to preserve the volcanic valley’s natural beauty). If you can’t make it to either the Hamakua or Kohala Coasts of Hawaii, visit the New York Botanical Garden’s exhibit Georgia O’Keeffe: Visions of Hawai’i and transport yourself from the Hudson River to the Central Pacific.

less than 200 natives; travelers may snorkel along the coast, but they aren’t allowed to come ashore. It’s similarly forbidden to visit the neighboring uninhabited island of Lehau, though the waters off both islands are accessible via a boat tour from Kauai, and the islands are visible from certain points on the Garden Isle.

8. Kahoolawe: Another uninhabited island, Kahoolawe is visible from Makena Beach in Maui. Why these islands are forbidden remains a mystery, though, of course, local legends abound. Speaking of which: Under no circumstances should you pick up a rock on the beach to bring home with you. You will be cursed. Trust us.

Katherine Parker-Magyar
Katherine is a freelance writer focusing on travel, culture, lifestyle, and politics. Her work has appeared in The Week, Tasting Table, Elite Daily, POPSUGAR, and Electrify, among other publications. She's traveled to all 50 states and 40 countries, but calls New York City home. Follow along on Instagram at @katherineparkermagyar or visit her website at www.katherineparkermagyar.com.
Travel
Travel
Travel Vacation