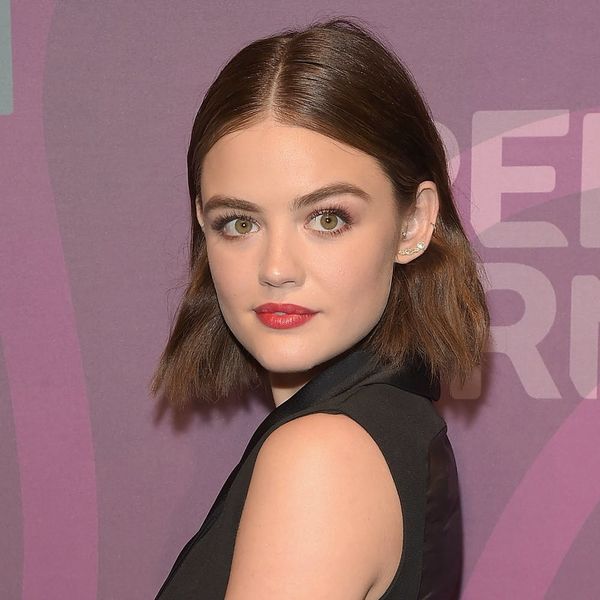 We’re just gonna’ throw this out there: Pretty Little Liars star/hair chameleon Lucy Hale’s brow game is most definitely 100. If anyone knows what it takes to get the perfect eyebrows, it’s this girl — well, her and fellow goddess-in-brow Cara Delevingne, of course!

The secret, according to Lucy, doesn’t lie in any one specific product, however: It’s more about embracing your natural features.

Lucy says it’s a lesson she herself had to learn the hard way. “I’ve always had very bold brows and it was during a time that people were making them very thin, so I always felt like a little out of place,” she admitted to People mag. “Then I overplucked mine and they looked crazy. Now it’s like, the bigger, the better.”

Though many stars are once more beginning to turn toward a sleeker, more arched brow, Lucy is sticking to what works for her this time around: bold and beautiful. In fact, we’d even venture as far as to say that the look has pretty much become her trademark.

And that means she doesn’t trust them to just anyone — make that anyone at all. “A lot of people are surprised to hear that I do them myself,” she said to People. “I get a little nervous when people try to touch them.”

Completely understandable, girl — we’d be fiercely protective of those bad boys too!

What do you think of Lucy’s brow advice? Tell us over @BritandCo!

Nicole Briese
Nicole is the weekend editor for Brit + Co who loves bringing you all the latest buzz. When she's not busy typing away into the wee hours, you can usually find her canoodling with her fur babies, rooting around in a bookstore, or rocking out at a concert of some sort (Guns N' Roses forever!). Check out all her latest musings and past work at nicolebjean.com.
Beauty Hack
Beauty News
Beauty Hack Celebrity Beauty