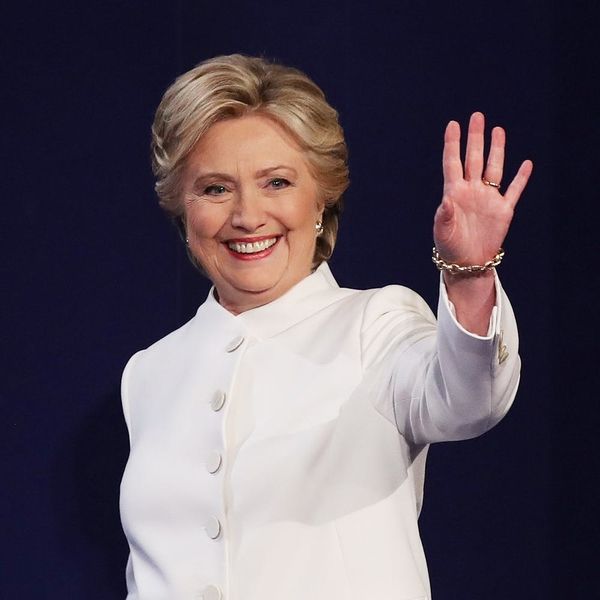 While Hillary Clinton still has an unexpected presence in the White House, seemingly watching over President Trump’s shoulder, she in fact is currently focusing on International Women’s Day, sharing a tweet (which was inspired by a child) that will totally give you hope.

Tweeting a pic that has gone viral in recent days, we see a handwritten note that was apparently found by a fourth grade teacher. Scrawled by a young activist, obvs, the message says, “Do you want to join a club for female empowerment. We are the leaders.” Excuse us while our hearts swell with hope for the future.

On #InternationalWomensDay I'm thinking about this young girl, & all the others like her out there. 💪✨ https://t.co/u1fvzAt1BI

My fourth grade teacher friend found this under one of her students' desks. <3 <3 <3 pic.twitter.com/7NSxIa6ujn

Captioning the pic with, “On #InternationalWomensDay I’m thinking about this young girl, & all the others like her out there. 💪✨” Woo! Grrrl power livin’ strong in the next generation.

She also shared her sentiment from last November, which is definitely worthy of a reminder…

"To all the little girls watching…never doubt that you are valuable and powerful & deserving of every chance & opportunity in the world."

Do you have a little lady in your life that you’re celebrating on International Women’s Day? Let us know @BritandCo!

Desiree O
Desirée O is a ‘Professional Bohemian’ who loves anything and everything related to the arts, entertainment, and pop culture. She ADORES being a ‘Newsy’ for Brit + Co, covering all of the latest tidbits of awesomeness that you want to read about. When she’s not writing, she’s either making messy art, going on long adventurous walks with her camera, or poking around over at bohemianizm (http://www.bohemianizm.com/). You can find out about Desirée O and her work at http://DesireeO.com/ or follow her on Twitter @DesireeO.
International Womens Day
Current Events
International Womens Day twitter
More From Current Events