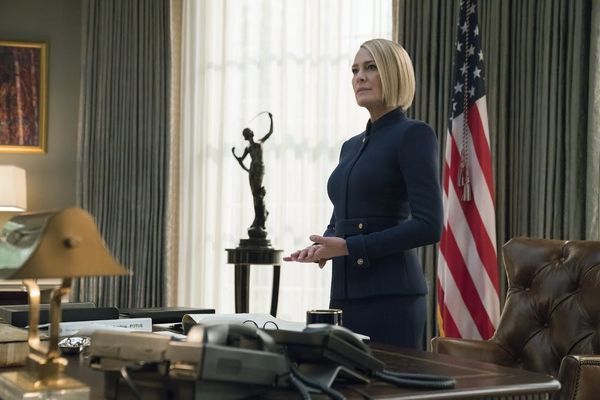 House of Cards will premiere its sixth and final season on Netflix this fall, with Robin Wright taking over the lead role from Kevin Spacey following his firing from the show. Wright’s character, Claire Underwood, was poised to step up anyway, but viewers have been wondering how the series would address Spacey’s absence in the new season, and the latest trailer hints at exactly that.

In the short clip, Claire is seen visiting her husband’s grave. “I’ll tell you this though, Francis,” she says in an icy, firm voice. “When they bury me, it won’t be in my backyard. And when they pay their respects, they’ll have to wait in line.”

The camera then cuts to Frank’s tombstone, which is adorned with white tulips and reads, “Francis J. Underwood, 1959 – 2017, 46th President of the United States of America.” It sits next to his father Calvin’s grave.

Season 5 of the hit Netflix drama ended with Claire declaring that it was her turn to run the country after her husband announced his resignation. Following Spacey’s firing from the series in the face of sexual misconduct allegations, Netflix confirmed that Wright would lead the show’s final season as the 47th President of the United States.

Wright has previously won both a Golden Globe for Best Actress in a Television Series Drama and an Emmy for Outstanding Lead Actress in a Drama Series for her role on House of Cards. The sixth and final season will premiere on Friday, November 2, on Netflix.

Are you excited for House of Cards season 6? Let us know @BritandCo.