How Sally Yates Became a Superhero for Political Integrity 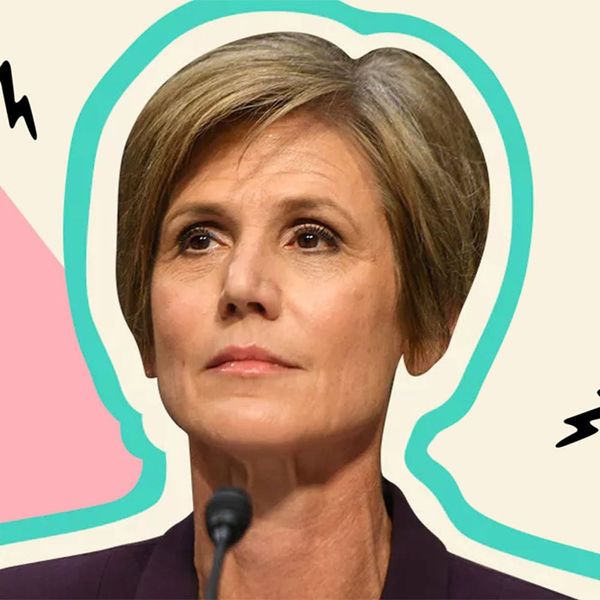 On January 30, 2017, President Donald Trump had only been in office for 10 days when he fired acting Attorney General Sally Yates. Until then, Yates was largely unknown to most Americans, but the act of defiance that led to her termination turned her into an overnight household name and a symbol of hope and resistance in the face of an already tumultuous administration.

Three days before Yates’ firing, Trump signed his infamous executive order banning people from seven Muslim majority countries from entering the United States. Yates, an Obama administration Deputy Attorney General, gave the travel ban a big fat no, issuing a letter to the Department of Justice saying she was not convinced it was lawful and ordering lawyers not to defend it. Trump reacted swiftly, having a hand-written letter of termination delivered to Yates and, shortly after, issuing a statement calling her “weak on borders and very weak on illegal immigration” and saying she had “betrayed” the DOJ.

Following her dismissal, Yates returned to her home in Georgia. While she declined all media requests, an inspirational Twitter account in her name went viral, as did memes extolling her as everything from a modern-day American hero to our very own Katniss Everdeen from the Hunger Games. Then, a few weeks later, on February 13, it was revealed that, shortly before her firing, Yates had warned the White House about national security advisor Michael Flynn’s inappropriate communication with, and vulnerability to blackmailing by, Russian officials. Flynn was pushed out. Yates’s status as a legend was just getting started.

Since then, Yates has returned to Washington to testify in the ongoing Russia investigation about her whirlwind 10 days under Trump, and video of her razor-sharp retorts to Senator Ted Cruz’s questioning have resonated just as much as her initial defiance. She has become increasingly vocal in her criticisms of Trump’s administration. And in her first interview since being fired, published in late May in the New Yorker, Yates underlines exactly why her decision to defy the president felt so right.

“I always try to carry out my responsibility to seek justice in a way that would engender the trust and the confidence of the people whom I served.”

“[My] resignation would have protected my own personal integrity, because I wouldn’t have been part of this, but I believed, and I still think, that I had an obligation to also protect the integrity of the Department of Justice,” she said. “And that meant that DOJ doesn’t go into court on something as fundamental as religious freedom, making an argument about something that I was not convinced was grounded in truth.”

In a campaign and presidency as notably inconsiderate to women’s issues as Trump’s, it was important seeing Yates stand up as early and vocally as she did for what was right even when it was extremely difficult. And from what Yates told the New Yorker in the spring, we’re not the only ones who think so. “I recognize that I may have a voice that I didn’t have before, and part of what I want to be able to do is to figure out how I can responsibly use that voice in a way to impact things that I think really matter.”