Hummus Shakes Are Now a Thing — and They Actually Taste Good! 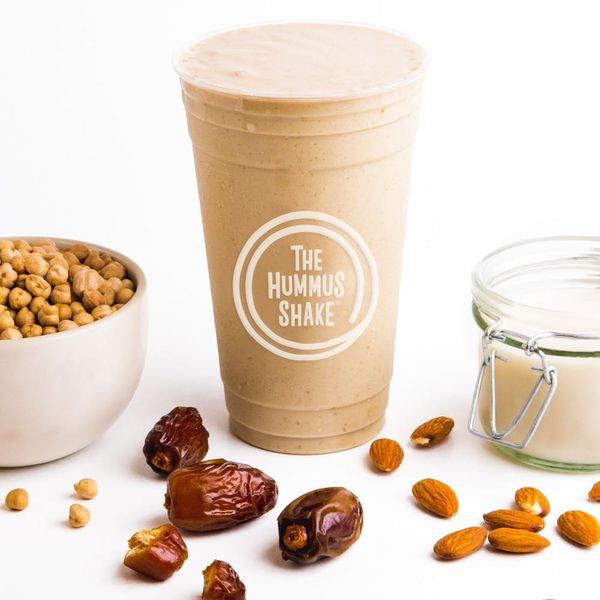 When we heard hummus shakes were a thing, we knew we had to try it at home. Who doesn’t love hummus and shakes? On Sunday May 13th, just in time for National Hummus Day (and also Mother’s Day),  Hummus & Pita Co. will debut the world’s first ever hummus shake for $5 at all locations nationwide. FYI, Hummus & Pita Co. also brought you cake batter, brownie, and cookie dough hummus. But back to the shake…

The hummus shake has the consistency of a milkshake, but it’s vegan, gluten-free, has no added sugar, and is packed with protein, fiber, and vitamins, despite being low in calories. There’s also only five main ingredients: chickpeas, tahini, a frozen banana, dates, and almond milk. At Hummus & Pita Co., you can order the shake in original, chocolate, strawberry, pistachio, and butter pecan. But if there’s not a Hummus & Pita Co. near you or you can’t wait until National Hummus Day, Hummus & Pita Co. were nice enough to give us its recipe so you can try it at home!

We whirled one up for ourselves and gave it a try! The taste is savory and not as sweet as you expect milkshakes or smoothies to be, but you might be into that. It is very tahini-forward, so if you’re not a fan of tahini, we would suggest using 1/8 cup instead. You also could easily sub tahini out for sunflower seed butter or nut butter of your choice. Have fun adding some fresh or frozen fruit or different flavors to your hummus shake at home to mimic the other flavor options. Happy National Hummus Day!

Would you try a Hummus Shake? Let us know on Twitter.

Gabi Conti
Gabi Conti has two passions in life: food, and dating. She went on 10K hours of dates in her 20s and is sharing her knowledge in her first book 20 Guys You Date In Your 20s, which drops with Chronicle in the spring of 2020. Gabi is a writer and host, who currently hosts and writes a weekly entertainment show Hollywire Vlogs, she wrote and hosted 423 episodes the Elite Daily Show for Verison’s go90 and Elite Daily. She has contributed dating and wellness articles to Cosmopolitan, Hello Giggles, POPSUGAR, mindbodygreen, and Elite Daily. You can follow her on Instagram @ItsGabiConti.
Dessert Recipes
Food News
Dessert Recipes First Bite Healthy Essentials Healthy Living Healthy Recipes
The Conversation
Reviews:
More From Food News