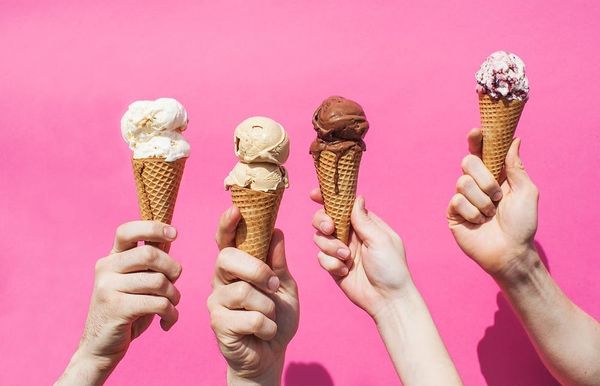 1. Sweet Republic: If you’re passionate about ice cream, this Arizona ice cream shop is your spot. The belief in beginning each batch with the purest ingredients, while keeping things local and in season is the secret to Sweet Republic’s sweet success. Over 20 homemade flavors await, but don’t miss out on the sundaes, milkshakes, ice cream sandwiches and pies… oh my! (via Sweet Republic)

2. Bi-Rite Creamery: The staff at Bi-Rite is known for their strong biceps (from all the scooping going on) in this legendary San Fran creamery. With the idea that ice cream flavors didn’t always live up to their name, Bi-Rite strived to create the most intensely flavored ice cream possible, you know — lemon made with fresh squeezed lemons, butter pecan with perfectly toasted pecans drizzled with brown butter and chocolate made with the finest cocoa around. We’re talking real, house-made ingredients that come from local farms. Heck, they even make their marshmallows for Rocky Road with organic sugar that’s sourced locally! If it’s your first time, may we suggest starting with a scoop of the famed salted caramel? But you really can’t go wrong. (via Sunset)

3. Big Gay Ice Cream: Bringing good old-fashioned soft serve to the streets of NYC in a big gay ice cream truck is what this quirky brand is all about… oh, and toppings — lots and lots of toppings! You absolutely cannot miss out on the Salty Pimp — vanilla ice cream with dulce de leche, sea salt and chocolate chips or the Mexican Affo’gay’to, a spicy hot cocoa with vanilla ice cream, spicy cayenne, shaved chocolate and whipped cream. In fact, this ice cream’s so phenomenal, the truck just couldn’t keep up. Big Gay Ice Cream can now be found in brick and mortar locales on the east and west coast. Now that’s BIG! (via Epicurious)

4. Kelley Country Creamery: From the heart of dairyland (Wisconsin) comes some old-fashioned ice cream that’s been around since 1861, which makes it clear that the Kelley’s know a thing or two about ice cream. The ice cream is made with farm-fresh, non-homogenized milk from their very own cows and mixed with local ingredients to create America’s favorite ice cream flavors. You really can’t get closer to homemade than Kelley’s Country Creamery. (via USA Today)

5. Salt and Straw: Dubbed as Portland’s farm-to-cone shop, Salt and Straw is scooping out super creative flavors like Pear with Blue Cheese, Grandma Malek’s Almond Brittle with Almond Ganache or Bone Marrow with Smoked Bourbon Cherries. Owners Kim and Tyler Malek opened the creamery doors with a little luck, lots of love and a bit of strategy, giving Portlanders a taste of something you can’t get anywhere else. These ice cream flavors are inspired by local farms and the fruits and veggies that they grow. With each lick at Salt and Straw, a story is told and shared through the senses. (via Salt and Straw)

6. Moomers: Described by some as summer in your hands, this countryside creamery on a quaint farm is scooping out a field of over 120 flavors! If you’re not familiar with Traverse City, Michigan, know this: They have lots of cherries, so of course, Moomer’s came up with Cherries Moobilee — a black cherry flavored ice cream with chunks of black sweet cherries, chocolate fudge swirl and chunks of brownies. Oh, and while you’re licking your cone, go out say thanks to the cows who provide the milk for Moomers. (via Moomers)

7. Creole Creamery: With a motto like, “Eat ice cream, be happy,” how can you not fall in love? Bordering on diverse and unique in the flavor department, this shop not only delivers on taste, but on experience, too. Try a new flavor, slurp an old-fashioned soda or malt and if you can handle it, try the Tchoupitoulas Challenge. The New Orleans Creamery specialty is a whopping eight scoops of ice cream and your choice of eight toppings served in grand fashion with whipped cream, cherries and wafers. If you can finish this monster without anyone’s help, you will be entered into the Tchoupitoulas hall of fame and get your name on a plaque. Worth it! (via Gallivant)

8. Morano Gelato: Italians know that gelato is the only way to go when it comes to icy, creamy, hot-weather treats. Morgan Morano, the founder of Morano Gelato, spent several years side-by-side a Sicilian gelato chef who became her mentor. In 2010 Morgan decided that America needed a taste of Italy’s bold flavors and introduced gelato to the small town of Hanover, NH. A gelato machine was built and shipped all the way from Northern Italy and Morano Gelato began churning out authentic Italian ice cream… but be warned! This gelateria has a massive following, so you may have to wait your turn. (via Morano Gelato)

9. Rainbow Cone: Since 1926, this Chicago ice cream shop has been solving the age old dilemma of vanilla vs. chocolate, filling a cone with a colorful medley of chocolate, strawberry, Palmer House (vanilla with cherries and walnuts), pistachio and orange sherbet. Why all of those flavors? Well, Joseph Sapp, founder of Rainbow Cone, grew up as an orphan and worked on a farm, saving some of his hard earned pennies for a special treat. Tired of the same old vanilla or chocolate, Sapp dreamt of a rainbow of flavors and, with his wife, Rainbow Cone was born. (via Chicago and Then Some)

10. Jeni’s Splendid Ice Creams: Jeni Britton Bauer has been building amazing ice cream flavors from the ground up for nearly two decades and she’s going to keep it that way. Jeni refused to cut corners and stands by her belief in using milk from grass-grazed cows + whole ingredients that are blended, baked, peeled, chopped, skinned, pulverized and even blowtorched by the crew of Jeni’s Splendid Ice Creams. What you wind up with is pure, natural, imaginative, honest-to-goodness ice cream with a promise of no unnatural flavorings or chemical dyes. Always creating something new, Jeni can guarantee surprising ice cream flavors each time you step into her shop. Chocolate Truffle with Backyard Mint, Saison with Sunflower Seeds and Golden Flax or Sweet Cream Biscuits and Peach Jam are only a few of their current offerings. (via Jeni’s Splendid Ice Creams)

11. Ted Drewes Frozen Custard: Okay, okay. Technically, custard is not ice cream, but we’d feel totally guilty if Ted Drewes didn’t make the list! Since 1929 Ted Drewes’s family has been serving up custard that has reached national acclaim. Refusing to franchise their family-owned operation, they attribute their success to quality. Sticking to their roots and darn delicious custard, Ted Dewes in St. Louis, MO is the place to get your sugar fix. (via Yum Sugar)

12. Graeter’s: Want to know what makes Graeter’s ice cream truly unique? It’s all in the churning, you see, the Graeter family believes in the traditional French Pot process. By creating just two gallons of ice cream at a time, the folks over at this Ohio-based shop are able to achieve a creaminess that surpasses all other ice creams. Since 1868 the Graeter family has been mixing up creamy flavors, from street market vending to a fully operated plant that distributes Graeter’s ice cream everywhere. (via Huffington Post)

13. Chinatown Ice Cream Factory: Scooping out ice cream with a twist, this decades old shop is a landmark in NYC’s Chinatown. This family-run establishment exclaims that ice cream making is in their genes, dishing out flavors like Durian, Almond Cookie, Black Sesame or Green Tea. If you have something to celebrate, try one of their signature Chinese ice cream cakes: Three layers of flavor that include Lychee, Red Bean and Mango. (via Chinatown Ice Cream Factory)

14. Penn State Berkey Creamery: You know the place where that famous duo Ben and Jerry studied to get their ice cream just right!? It’s at this creamery store that serves some pretty good ice cream — and also serves as a laboratory for food science faculty and students who are conducting dairy research. Enjoy an icy, creamy treat and learn a thing or two at the same time. (via Penn State)

15. Ample Hills Creamery: C’mon you’re invited to one of Brooklyn’s fave community gathering spots, Ample Hills Creamery is a space to sample unique ice cream flavors and hang out on a rooftop deck. All of Ample Hill’s ice cream is made in-house from start to finish, and as a registered dairy plant, they pasteurize the milk and cream right on-site — and you can watch all the magic happen while filling your tummy with sugar-filled goodness. (via Ample Hills Creamery)

16. Jersey Junction: The sweet, toasty smell of fresh baked waffle cones hits you in the face the second you open the door. The walls are lined with bins of old-fashioned candy, a freezer case displays hand-dipped, chocolate covered bananas and an old toy train circles overhead. The Junction’s been getting their ice cream from Hudsonville Creamery since 1963. They may not make their own, but this Grand Rapids ice cream shop is a haven for the nostalgic. (via Experience GR)

17. Dolcezza: Dolcezza translates to “sweetness” and how this gelateria came about is a sweet story indeed. “On a warm humid night in South America, under the lights at the popular gelato shop Freddo, Robb + Violeta had just landed in Buenos Aires after an epic journey, which began in the Brazilian Amazon and finished three months and 4,000 miles later in São Paulo.” The couple instantly fell in love… with the gelato. They returned home wanting to create something with their hands. Dolcezza was born, where they started serving daily-made gelato and craft coffee to happy people all over Washington D.C. (via Dolcezza)

18. Pumphouse Creamery: Minneapolis, MN is where handcrafted, local ingredients are creatively mixed into 20 unique ice cream flavors. This shop got its start dishing out one scoop at a time, but when its popularity started to grow, they began pumping out pints and quarts as well. We hear that Pumphouse also makes they’re very own root beer, so it goes without saying that you can’t miss out on their classic root beer float. (via Pumphouse Creamery)

19. Amy’s Ice Cream: Deep in the heart of Texas lies the home of the famous Mexican Vanilla Ice Cream, a perfect cure-all to a hot Texas day. Scooping out over 350 rotating flavors along with frozen yogurt, fruit ice and ice cream cakes, Amy’s the place to satisfy any sweet tooth. (via Serious Eats)

20. Loves Ice Cream: Don’t say we didn’t warn you, but we’re pretty certain you’ll fall in love with Loves Ice Cream. Here, you’ll find hand-crafted ice cream from grass-grazed cows, support of local agriculture and collaboration with local businesses to create unique flavors such as Madcap’s Affogato. Loves is even whipping up vegan gelato which has been such a sweet success, they have a difficult time keeping the flavors available. (via Vegan Grand Rapids)

Are you screaming for ice cream?! Tell us your go-to shop for America’s favorite summertime treat, in the comments below.

15 Summer Pies for a Sweet Fourth of July