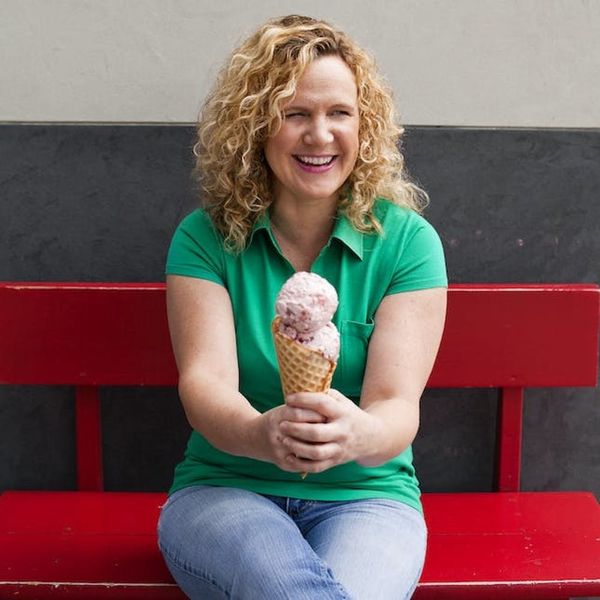 If your sweet tooth is your calling, why not learn how to turn your dessert dreams into a full-time passion from women entrepreneurs who took their inspiration beyond an idea? One movie date with her future husband to see Willy Wonka and the Chocolate Factory prompted Sugarfina co-founder Rosie O’Neill to wonder why grown-up candy stores didn’t exist. Food blogger Katie Higgins flipped her side gig of writing healthy dessert recipes into a career, and food scientist Natalia Butler found her ideal job creating new flavors for the Ben & Jerry’s ice cream empire. In this week’s How to Quit Your Day Job, we chat with Kim Malek, the CEO and founder of Salt & Straw — a popular West Coast chain of ice cream parlors focused on local flavors — about how she turned her idea for a community-based gathering spot for good times into a sweet success story.

Years before Salt & Straw founder Kim Malek started her company, she worked at Starbucks Coffee, Yahoo!, adidas, and Gardenburger in marketing, community outreach, and product management and development. But inspired by the time she lived in the foodie paradise of Portland, Oregon, she had a vision to create a local eatery where friends could gather. Fourteen years later, she and her cousin Tyler, now head ice cream maker, started with an ice cream cart in Portland. Their unique flavors, like Strawberry Honey Balsamic with Black Pepper and Pots of Gold & Rainbows (a mix of colorful marshmallows and cereal milk-flavor), garnered fans and graced Food Network’s list of the Top 5 Ice Creams in America.

With brick-and-mortar scoop shops now open in Los Angeles, Downtown Disney District, Portland, San Diego, San Francisco, and Seattle, the neighborhood ice cream dream Malek had 14 years earlier is now a thriving company. This year, Salt & Straw is gearing up to open its 19th location, and the team will be releasing its first cookbook, the Salt & Straw Ice Cream Cookbook (out April 30).

Kim Malek: I have three kiddos, and I try to always take them to school when I’m not traveling. My mornings are all about them. I wake up around 5:30am, take our new puppy out for a little walk, make coffee, and pull myself together over a morning dose of NPR, and then wake up the littles and get them rolling. I’m big into ensuring they have a well-rounded breakfast, so I’m always dreaming up new things to serve along with a large plate of fruit daily. We dash out the door to be sure they have some time to play before school starts (essential to burn energy before sitting all day), which also gives me time to connect with other parents and teachers. Having accomplished all of that before I arrive at the office by 8:30am makes me feel like I’ve already packed in a lot. It’s great momentum for my busy day ahead.

B+C: What inspired you to start your company?

KM: I’d spent most of my adult life in Seattle but lived in Portland for a brief period in the mid-’90s. While there, I was struck by the incredible sense of community and collaboration that I experienced, and I was convinced that an ice cream shop would be the perfect way to reflect that. I wanted to create a place where people could run into their neighbors and spend time with friends and family. I started to work on a plan to open a shop and even looked at real estate. But I got cold feet and retreated back to my safe corporate job for the next 14 years, until the stars aligned for me to move back to Portland in 2010 and dust off my plans. Now, when I see the lines and groups of people who come together at our shops, it’s really gratifying to know that my original inspiration of creating great neighborhood gathering places has come to life in so many wonderful places up and down the West Coast.

Shoutout to our scoopers at Portland's Northeast Alberta scoop shop, where we first served Salt & Straw's classic flavors way back in 2011. The team is still one of the grooviest gaggles of ice cream ambassadors we've ever met, and we couldn't do what we do without them. Thanks for spreading the happiness, friends! (Thanks for the photo, @bridgesandballoons!)

B+C: How do you challenge yourself as an entrepreneur?

KM: I heard [football quarterback] Joe Montana speak several years ago and identified with a statement he made about being motivated by fear. As a classic entrepreneur who is motivated by the possibilities with a great appetite for risk, also being motivated by fear seemed ironic to other people when I described it. I had the opportunity to sit next to Joe at a dinner a few months ago and let him know that his statement had stuck with me all these years later and asked him if he’d explain a bit more what he meant by that. He said that he was generally pretty confident that he’d succeed at whatever he was doing, but he was motivated by fear to create contingency plans, be more ready than seems logical, and work harder than anyone else. I loved that!

Guess who's back?! 💕⭐🐴👠🍀🌙🍯🌈🎈Get ready to time warp to fabled flavors past because our March menu launches Friday 3/1 with some of the most beloved ice cream concoctions we've ever made—including Pots of Gold & Rainbows—so stop by your local scoop shop ASAP for a taste of this cereal-rific creation as well as a few more fan faves you've been waiting for...

B+C: Tell us about how your family and friends help support your business.

KM: My family has been instrumental in the company. I founded the company with my cousin Tyler. He wanted to join me to make ice cream when I was getting the company started, but he’d never made ice cream before and just started culinary school. He lived in my basement and experimented with ice cream making on a machine he got at Goodwill. It quickly became apparent that he was really talented, and he became the head ice cream maker right off the bat. It turned out to be a terrific partnership, and his culinary sense has made the company what it is today. The other person I have to mention is my partner Mike. Before I started Salt & Straw, I lived in Seattle and was about to move to NYC. I came to Portland for a birthday and met a guy in a bar, which doesn’t usually end well, but we are still together with three kids. And so I moved to Portland instead of NYC for love. I began working on the business but didn’t really have the funding needed. I cashed in my 401(k), sold my house, and had a garage sale to raise money, but was still $40K short. Mike put his house up as collateral for a small loan from the City of Portland to secure the final funds needed. He’s been an incredible support ever since.

"Dear @saltandstraw, you have made my day with your delicious vegan ice cream. I have to eat as much as I can. Please don't tell mom and dad. Love, Paris. PS please send more!!" Thank YOU for giving our Toasted Coconut Milk & Cookies a try, @paristhefrench. We like your style!

B+C: What have you learned from a failure or mistake you made?

KM: One mistake that most growing companies make is around hiring. I’ve learned what a costly mistake this can be. I’ve found that spending more time on scoping roles to be sure we understand what the company needs over the next two to three years and collaborating with the team on core competencies associated with the position are key to ensuring that we find the right person. It slows us down at the start but allows us to move forward with everyone aligned on what we are looking for in a candidate.

KM: One of the best pieces of advice I’ve gotten: not to take advice! Stay clear about your original vision and mission, and come back to that when making decisions. I find it most helpful for others to share their experiences versus offering advice. I’ve learned the most that way and have been able to choose how to incorporate that experience into my decision-making.

If you're planning a midnight celebration for New Year's, make sure the freezer is stocked with your favorite flavors! We've teamed up with Postmates to offer FREE Salt & Straw delivery from December 31st through January 6th. That's right—check your #Postmates app to get some pints delivered to your front door.

B+C: What do you love about your job?

KM: I’m most inspired by working side-by-side with people who have been with Salt & Straw since the beginning and have had a long career, continuing to push the company and others to new heights. It’s incredible to see how people have grown and taken the idea of this company far beyond what I could have imagined. I popped into a meeting recently with folks from all over the company working to figure out how to introduce a new product. It blows my mind to see these super-smart, passionate people creating a new future together.

B+C: Name two female heroes who you think should get a shout-out.

KM: First, Maggie Weissman, a principal at Billings Montana High School where I grew up and who went on to own Great Harvest Bread in Seattle. Before that, she was in the Peace Corps. I remember going to the drug store with her to buy toiletries for someone she was hiring who was recently released from prison. She worked on a plan to help him be successful in the job. Watching her go through the process changed everything I knew about what creating jobs could mean for others.

Second is RBG [Ruth Bader Ginsburg]. One story I love about her is that when her son’s school called about her son’s behavior, she said, “He also has a father. Please call him from now as the first point of contact for issues pertaining to our son.” Since they both worked, it didn’t seem fair that the school always contacted her first. Funny enough, she said when the school now had to interrupt a man at work, they stopped calling so frequently. As a household with two working parents, it was a good reminder to be sure the systems and institutions we work with are supportive of co-parenting. It’s an ongoing struggle to make it all work.

B+C: If you could tell aspiring creative women anything, what would it be?

KM: Find your voice and use it. You have terrific ideas that the world deserves to hear. I think women tend to be too conservative in sharing their thoughts, dreams, and plans, and wait until they have things perfect to speak out. One of the biggest gifts someone can give you is to underestimate you.