12 Female TV Characters Who Inspired Us in 2018 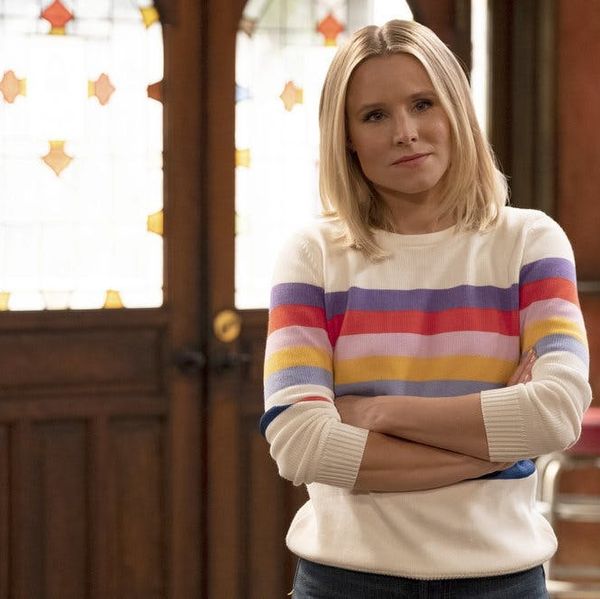 The 2018 TV season featured some very compelling characters — including, of course, several inspiring women. Just about anywhere your viewing habits took you this year, you were witness to fearless female leaders taking charge and using their quiet confidence to help others (and themselves), or even so-called hot messes trying their very best to do what's right. Complicated and funny and imperfect and strong, these 12 female TV characters inspired us throughout 2018. (Photos via Beth Dubber/Netflix + Sophie Mutevelian/BBC America + Andrew Eccles/NBC + Merie W. Wallace/HBO)

Issa Dee (Issa Rae), Insecure: Season 3 of the hit HBO show started out with our heroine, Issa, unemployed and unsure of her whole life. But by the finale, she was celebrating her 30th birthday surrounded by friends — and no unhealthy love interests — after taking charge of her life and learning to live it for herself first. We always knew she'd get there. (Photo via Merie W. Wallace/HBO)

Eleanor Shellstrop (Kristen Bell), The Good Place: Eleanor occasionally (okay, often) still finds herself reverting back to the self-centered, nihilistic woman who earned a spot in the Bad Place, but in season 3, we've seen glimpses of her doing the right thing even when it took the most amount of effort and offered her nothing in return. May we all strive to keep trying, even while we're scowling. (Photo via Colleen Hayes/NBC)

Eve Polastri (Sandra Oh), Killing Eve: First of all, we're so lucky to have Sandra Oh back on TV. And second of all, what a role. While her Killing Eve character, an MI5 officer, might lead what seems like a regular, mundane life, she springs to action when tasked with tracking down professional assassin Villanelle (the equally as delightful Jodie Comer). Eve and her target are both curious, confident, and ruthless, and their dynamic is one of the most exciting we can recall in recent years. (Photo via Sophie Mutevelian/BBC America)

Sabrina Spellman (Kiernan Shipka), Chilling Adventures of Sabrina: Shipka's portrayal of the iconic teenage witch in Netflix's adaptation is a strong-willed and principled teenager who not only stays fiercely true to herself, but also encourages and helps other people to do the same, even when it proves difficult — or even downright deadly. (Photo via Diyah Pera/Netflix)

Thirteenth Doctor (Jodie Whittaker), Doctor Who: For the first time in its 55-year history, the British TV institution cast a woman to play the title role. Whittaker was poised to wow us in the role either way, but her wise and witty portrayal of the iconic character was everything we could have dreamed of. (Photo via Ben Blackall/BBC America)

Ruth Wilder (Alison Brie), GLOW: In a show with an entire cast of amazing characters, it's hard to pick just one. And while Betty Gilpin's Debbie "Liberty Belle" Eagan broke out in a big way in season 2, we can't help but relate deeply to Brie's Ruth "Zoya the Destroya" Wilder. Even while she was licking her wounds over her fallout with Debbie in season 1, Ruth was motivated to try harder than ever to do right and good by her wrestling teammates, and emerged as a natural and compassionate leader in the process. (Photo via Beth Dubber/Netflix)

Meredith Grey (Ellen Pompeo), Grey’s Anatomy: There is simply no Grey's without its namesake. In the show's 15th season, Ellen Pompeo continues to portray a leader who has overcome tragedy and every obstacle imaginable to rise through the ranks, this season reclaiming her right to have a satisfying personal life (including some steamy new love interests, because Grey's) after taking some time to focus on her award-winning medical career and life as a single mother. The fact that Pompeo walks the walk in real life only makes her on-screen depiction all the more meaningful. (Photo via ABC/Mitch Haaseth)

Emet Kamala-Sweetzer (Sarayu Blue), I Feel Bad: Blue's smart and relatable character on the Amy Poehler-produced comedy is a mom, wife, and daughter. She also happens to kick ass at her job as a video game artist, which involves a cross-section of industries where women are underrepresented. Like all of us, though, she falls short of her own expectations sometimes — and that might be when the character shines the most. NBC hasn't yet ordered any more episodes of I Feel Bad, so if this is the end, Emet, thank you. (Photo via Tyler Golden/NBC)

Vanessa "Van" Keefer (Zazie Beetz), Atlanta: Van might have started out as a secondary character to Earn (Donald Glover) and his friends, but from the beginning, she shone every time she showed up on screen. And as the show has progressed, she's gotten more opportunities to flex her independence, her relatable imperfections, and her devotion to her girlfriends. (Photo via Guy D'Alema/FX)

Jessi Glaser (Jessi Klein), Big Mouth: Sure, she's a cartoon, but Big Mouth's Jessi is a deeply loveable and real depiction of a pubescent tween. From her emotional honesty to her outspokenness and her disregard for what people think of her (most of the time, anyway), she's a consistent standout character on the show. She always tries to do her best and what's right, which at that age — let alone any age! — isn't easy. (Photo via Netflix)

Andy Herrera (Jaina Lee Ortiz), Station 19: In its second season, the Grey's Anatomy spinoff — and most notably, lead character Andy — continues to excel at breaking down stereotypes about traditionally male-dominated career fields, and really, would you expect anything less from a Shonda Rhimes production? As a co-lieutenant at the firehouse, Andy constantly fights the double standard that women struggle with and must prioritize balancing their personal and professional lives — and she remains tough as hell in the field while doing so. (Photo via ABC/Mitch Haaseth)

Blanca (MJ Rodriguez), Pose: Ryan Murphy's groundbreaking show about ballroom culture in 1980s New York features the largest transgender cast for a scripted show in history. While the show's strength is undoubtedly its ensemble, at the forefront is Blanca, who, shortly after learning she's HIV positive, leaves her ballroom family to boldly forge her own path. Her nurturing nature and boundless positivity in the face of a lot of adversity and injustice was an inspiring highlight on TV in 2018, and we can't wait for more when it returns for season 2 in 2019. (Photo via Jojo Whilden/FX)