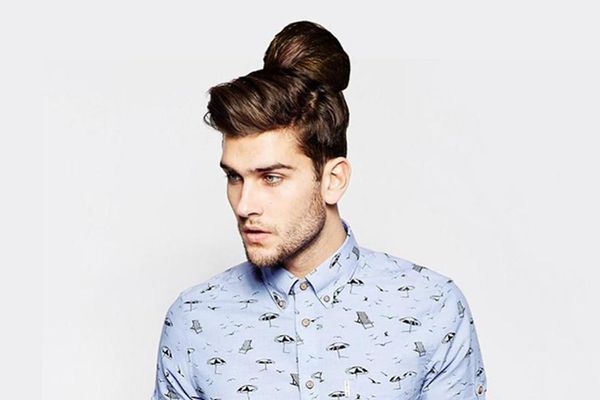 We thought we saw it all when April Fools’ Day 2014 took the jokes to another level. But 2015 is bringing some serious LOLs to the Internet. From dog pranks to clip-on man buns and even self-driving Domino’s cars, this year’s jokes are nonstop. Scroll through the best below!

Prafting: As homemakers, we obviously love to DIY but why isn’t DIF a thing? Thanks to Darby Smart, Do-It-Furself is now happening and all we want to do is watch kitties knitting, puppies painting and dogs decorating. Where’s the livestream of this animal maker action?

Uber for Tinder + Tinder for Uber: Looking to take your ridesharing to the next romantic level? Try out these complementary apps where you can find a match with your Uber driver or on Tinder. The social romance game just got more efficient.

36o° Selfie Rig: If you’ve always been a huge fan of the Glam Cam during E‘s red carpet coverage, now you can make your own 360 degree moment with this multi-camera device. Strap the vest around your body and let the 12 cameras snap your body away.

A Beautiful Mess: The Documentary: A website isn’t enough these days and that’s why our fave ladies Elsie + Emma are releasing a BTS doc about their story. Check out the hilarious trailer here and keep your fingers crossed they gals change their minds and actually greenlight this film.

First-Ever Selfie Awards Hosted by Kim Kardashian: The mystery of the best selfie in numerous categories will linger no more as E! + Periscope will be handing out awards for “The Mario Testino Fashion Selfie Award”, “Special Achievement in Cat Selfies” and more. Tune in Sunday for all the front-facing camera action.

PAC-MAN on Google Maps: The arcade game is no longer exclusive to the bars. Explore the streets of some of the most iconic cities while running from the ghosts. Yeah, nothing productive is getting done today (or the rest of the week).

Moto Selfie Stick: Trade in that plastic selfie stick for a classy one made of wood, leather and — best of all — unicorn tears. Now you’ll at least look good when you whip out the silly selfie accessory stick.

Airbnb Cave Rentals: If staying in someone else’s dwelling doesn’t really appeal to you, maybe a cave will work. Check out these terrains and try getting your glamp on instead of pampering for your next vacation.

Grøüber: Uber and Lyft drivers are totally cool, but if cats can get us from point A to point B, we’ll choose the feline option every time. Honestly, they can’t be that much worse than the humans.

PlayStation Flow: If playing the game isn’t enough for you, the future of virtual reality gaming should interest you. Project Morpheus lets you dive — literally — into your game like never before. Throw on a suit and get your game on.

Microsoft MS-DOS Mobile: We’ve seen a ton of advancements in technology, but Microsoft is taking is back to the basics with its disk operating system for the true techies. Learn more about the OS and turn yourself into a coder before the end of the day.

Clippy for Sunrise: Everyone’s favorite sidekick from Microsoft in the ’90s is returning thanks to calendar app, Sunrise. After being on the unemployment line for nearly 10 years, the paperclip personality right inside the app to help you out with anything needed. See ya, Siri.

John Green, Not In the Stars, To Hold Our Destiny: The publishing house of the Fault In Our Stars author gave everyone a gasp when they released the ‘cover’ of his next novel. Sadly, this one was a total joke. Regardless, we’re still tearing up over John’s work (or lack thereof).

Virgin Moves to Branson, Missouri: The multi-faceted company announced they are making the move to the Midwest based on the name of owner, Richard Branson. The company will be developing hotels, launching flight service to the town and even producing a film. Guess Branson, MO is the next hot spot.

L.A. Votes to Move Santa Monica Closer: Apparently Angelenos feel like Santa Monica is too much of a drive on the 101 so the city voted to move it close to L.A. Yep, you can totally do that in California ;)

Kia Smile-to-Start: Say farewell to the car keys as the newest auto tech involves a simple smile to get the MPH from zero to 60. Wonder if they also developed Scream-to-Stop tech.

LE TOTE Techie Tote: Why only get your outfits from the Netflix of clothing when you can get your techcessories also. Filled with the essentials for the digital era worker, you’re gonna wish this one actually wasn’t an April Fools’ Day prank.

ASOS Clip-In Man Bun: It takes a lot to manicure and grow out those long locks of hair. For the bros that don’t have the time — or patience — to tame the man and throw it up in a bun, the online retailer has made it easy as a clip to get some bun action. If you happen to already be a bro with a bun, no clip-in is required for these style tips.

Mack Weldon Downloadable Underwear: The future of underwear is here. Who has time to hit the store or wait for clean underwear from the laundry when you can just print ’em, cut ’em and wear ’em. Cut carefully, we don’t want any paper cuts down there…

Domino’s Domi-No-Driver: Move over Google self-driving cars, see ya pizza delivery guy, the pizza company is introducing driverless pizza delivery vehicles. Just ’cause it may look like something from Terminator doesn’t mean the pizza will taste like metal. Get into it, with a side of wings.

Timehop’s Timebook: The social media app that makes every day a TBT poked a little fun at Facebook’s new feature “On This Day” by announcing its own version of Facebook essentially. Tech jabs, heehee.

Google Went Backwards: The world’s most convenient place to find the info to everything went and made it complicated (but in a totally fun way) but going backwards on us. Get your reverse searching on and you’ll never get frustrated with Siri again.

Petbox by Redbox: While you may think this is an outrageous idea, think again because dogs (and other pets) need date nights too every once in a while.

Hulu Pets: Humans have more than enough programming, so it’s about time our furry friends get their own streaming category. Not only is the slate of programming amazing — Wheel of Furtune, The Real Pugs of Portland, The Bark, Clawed City — but it totally sounds like shows that would make our DVR. Can we make this happen?!

Netflix Binge Watching PSAs: We’ve all been guilty of indulging in a few too many episodes of our favorite on-demand episodes and now the streaming company that caused it is making fun of us. It’s cool though, we can take a joke.

YouTube Darude, “Sandstorm” Music Inserts: You know what’s better than watching your favorite YouTube videos? Getting to insert random noises and music into them while you’re watching ’em. Get your visual jam on while laughing at some cat videos, why dontcha.

What is your favorite April Fools’ Joke so far today? Share below!