Why the VMAs Are the Most Creative Award Show to Date 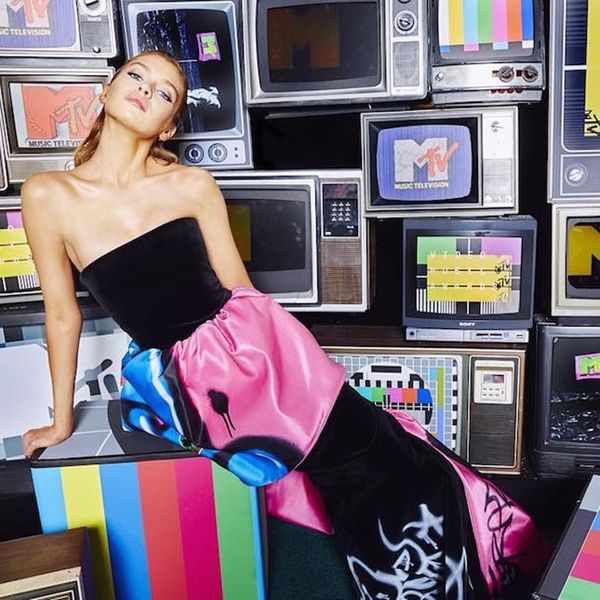 MTV’s Video Music Awards are live and while you’ve already seen some incredible red carpet fashion (taking notes!) and hair and makeup glam, you’re probably noticing that the pre-show and the Moonman (one of which Taylor and her Bad Blood Crew already won for Best Pop Video) look a little different this year. The reason is the creative genius behind it all — Moschino’s creative director Jeremy Scott who was heavily involved in the look of this year’s VMAs.

Jeremy Scott’s designs are bubblegum pop culture meets haute couture. The man has literally NEVER shied away from color. Everything that he touches is bold, bright and in-your-face colorful. For his spring/summer 2016 men’s collection, he sent his models down the runway in neon Marie Antoinette meets Captain Underpants-inspired outfits.

And while he didn’t dress his BFF for the red carpet today (Miley is rockin’ Versace), Jeremy and Miley go waaay back. For his MADE Fashion Week Spring 2015 show, he and Miley debuted their Dirty Hippy collection where the singer actually hand crafted some of the accessories that his models wore down the runway. That’s like, next level friendship bracelet making.

When MTV approached fun, kooky and hyper-pop cultured Mr. Scott to collab for the VMAs, it seemed like a match made in television heaven. The designer not only gave the iconic Moonman a total makeover with a gradient new rainbow wash, he even decked out the little guy in a pair of Jeremy’s signature fly winged sneaks and the giant peace sign chain. Yaaas.

This year’s VMAs red carpet is like nothing we’ve ever seen before. He designed the pre-show and the classic TV printed red carpet — and, of course, the similarly styled suit he wore which was also his creation. In an interview with Variety, Scott said he wanted “the guests [to] step into the Jeremy Scott world and it will be a whole new experience.”

What do you think of Jeremy’s VMA designs? Tell us in the comments below!

Kimberly Wang
Kimberly Wang writes about all things pop culture, tech, style, and beauty. She's a Bay Area transplant and has an MFA in Creative Writing from Columbia University. On a sunny New York day, you can find her hanging out with her mini schnauzer Isabelle Jellybean on a blanket in Central Park.
Miley Cyrus
Party
Miley Cyrus VMAs