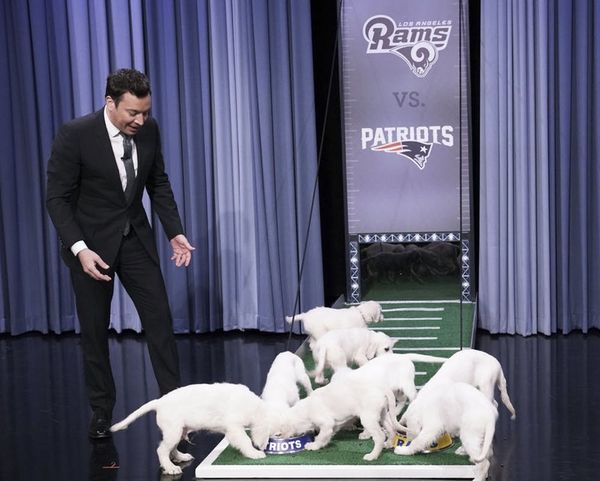 Puppy Bowl has long been one of our favorite aspects of Super Bowl weekend (alongside the endless delicious snacks, action-packed halftime show, and amazing commercials, that is), but it’s been getting some serious competition in recent years from Jimmy Fallon’s adorable puppy predictors.

The Tonight Show host has made an annual tradition of bringing out a bunch of rambunctious, energetic golden retriever pups to predict the winner of the big game. This year, on February 1, nine adorable puppies were tasked with choosing between two Super Bowl LIII kibble bowls, one marked for New England Patriots and one marked for the Los Angeles Rams.

After a brief pep talk from Fallon, the puppies ran down a short ramp resembling a football field. They seemed torn between their two choices and were pretty evenly split for a while, but once all was said and done, the funnyman called the tight game for… the Patriots!

The four-legged fortune tellers have a mixed track record when it comes to actually being right, though. While they successfully predicted that the Denver Broncos would beat the Carolina Panthers in Super Bowl L, they were wrong in choosing the Atlanta Falcons instead of the Patriots as champions of Super Bowl LI. Last year, they also missed the mark when they predicted the Patriots would take home Super Bowl LII over the Philadelphia Eagles.

To find out if the pups were correct this time around, tune into Super Bowl LIII when it kicks off tonight at 6:30pm EST on CBS.

Are you planning to watch the Super Bowl? Tweet us @BritandCo.