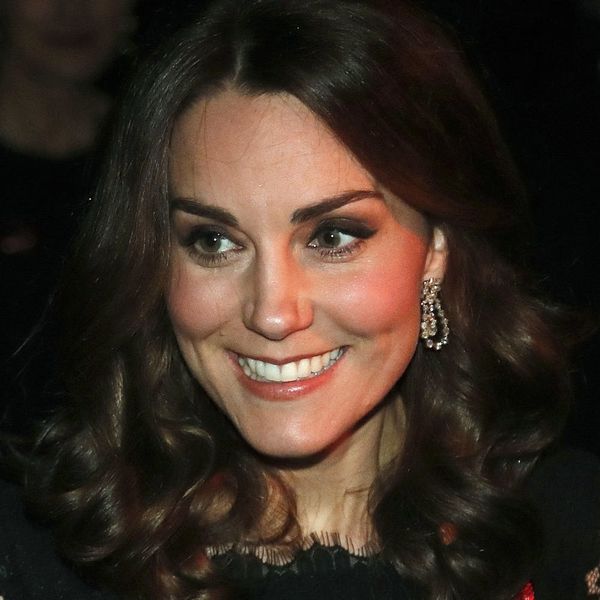 With Meghan Markle and Prince Harry on royal engagement watch, there was bound to be some comparisons between the former and the most recent lady to join the Royal family by marriage: Kate Middleton. The similarities became eerily real this week, however, when the Duchess of Cambridge stepped out donning a longer version of the exact same dress Markle, 36, wore five years earlier.

The mommy of two was spotted in a floor-length, lace-sleeve gown by Diane Von Furstenberg that looked positively regal when paired with her loose curls, jeweled cuff, and dazzling earrings while attending the 2017 Gala Dinner for the Anna Freud National Centre for Children and Families. While Middleton is known for recycling her clothing items, this particular gown is a look “recycled” from her potential sister-in-law.

Markle was photographed sporting the shorter, navy blue version of the dress way back as far as 2012 while attending a film event for “A More Perfect Union: Stories of Prejudice and Power.”

The classic frock in question is the Diane von Furstenberg Zarita Dress ($348). Looks like the Royal family may soon have not one, but TWO style icons in the near future, with both ladies looking like absolute knockouts in the elegant design.

From Your Site Articles
Nicole Briese
Nicole is the weekend editor for Brit + Co who loves bringing you all the latest buzz. When she's not busy typing away into the wee hours, you can usually find her canoodling with her fur babies, rooting around in a bookstore, or rocking out at a concert of some sort (Guns N' Roses forever!). Check out all her latest musings and past work at nicolebjean.com.
Celebrities
Celeb Style
Celebrities Celebrity Style Kate Middleton Lookalike Royal Family