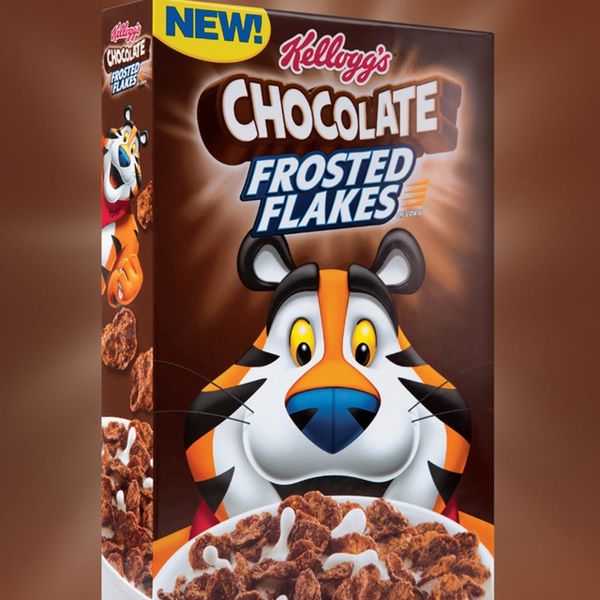 Frosted Flakes, a grrreat nostalgic cereal, is after our sugar-loving hearts — well, at least its parent company, Kellog’s, is. The brand recently announced a *new* flavor you’ll want to try ASAP: Chocolate. Nope, this is not a drill. Chocolate Frosted Flakes are r-e-a-l, and they’re about to turn your milk into pure chocolate bliss. In a press release emailed to Brit + Co, Kellogg’s confirmed that the flavor would be available nationwide come November 2017, meaning that first chocolate-y bite will be here before you know it.

The company’s senior director of morning food marketing, Brad Schwan, said in a statement that the decision to bring out a chocolate flavor was a no-brainer. “We stay close to our fans to make sure we are delivering the cereal experiences they want most,” he said, “which is what resulted in the delicious flavor of Cinnamon Frosted Flakes launched last year.” Schwan continued, “So, when we found out chocolate was the next most requested flavor, we set to work right away.”

Anyone who has ever visited Latin America and eaten what’s known as Choco Zucaritas might be confused. The Latin American version of Chocolate Frosted Flakes has been around for years. However, the two recipes are not the same, a Kellogg’s spokesperson confirmed to Brit + Co via email. The brand developed an entirely new recipe for the US market, the spokesperson said, creating a flavor with “more milk chocolate cues.” Latin America’s Choco Zucaritas, on the other hand, have darker, bitter chocolate notes. Tony the Tiger loves both, we’re sure.

According to Kellogg’s press release, America’s Chocolate Frosted Flakes recipe was created with the help of fans, who “weighed in at nearly every step.” The end result is a golden flake base that’s coated in roasted cocoa frosting for “a crunchy, delicious chocolatey experience from the first bite to the final, sweet satisfying sip of leftover milk.” NOM.

Drooling already? You can get your hands on Chocolate Frosted Flakes this month for somewhere between $4.69 and $5.79.

Macy Daniela Martin
Macy Daniela Martin is a freelance lifestyle writer based in New York City. When she's not writing about all things weddings at Brit + Co, you can find her trying to up her social media game on Twitter and Instagram. Binge-read even more of her published work here: MacyDaniela.com.
Chocolate
Food News
Chocolate Food Trends Foodie
The Conversation