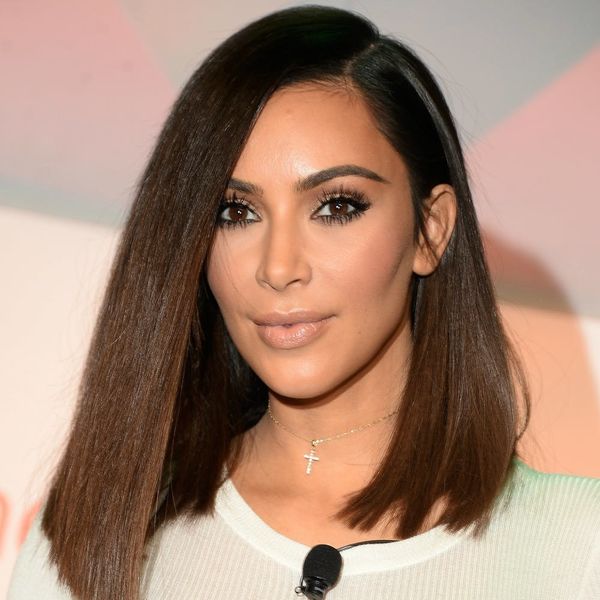 Kim Kardashian West is *NOT* a feminist — or at least that’s what she told a roomful of women when she took a time out from feuding with brother Rob Kardashian and Taylor Swift to be the keynote speaker at the BlogHer conference (travel blogging, anyone?) in LA this afternoon.

On hand to discuss her role in the blogosphere (she posts to her own blog three times a day, except on weekends, which is family time), Kim said that it was simply not a term she identifies with.”Everyone always says, ‘Are you a feminist? Are you this or this?’ And I don’t think that I am. I don’t like labels. I just think I do what makes me happy.” The rest of her remarks seemed to contradict that statement, however: “I love to support other women,” she said. Hmmm. That sure sounds pretty feminist to us!

K then went on to add that she looks to pal Jessica Alba for business advice, and relies on other girlfriends for their opinions in new ventures: Ventures like her new cutthroat reality show on Lifetime, which will see beauty bloggers competing for the title of beauty director of all the Kardashian apps and is currently in the process of casting (um, where do we sign up?!).

There’s also ventures such as her co-produced documentary (they’re all she watches, she says, except — what else?! — reality shows) #RedFlag, which focuses on how social media can be used as a tool to help identify and assist young adults with mental illnesses.

The KUWTK star said she was inspired by the show Hoarders, which she watched non-stop while in the hospital for an extended stay after complications with North’s birth. She went on to say that watching the interventions of the characters made her realize that some addictions are fueled by mental illness, and those in the throes of the illness may not even recognize they have it.

Though perhaps an unexpectedly serious topic for Kim, it falls in line with the important messages the self-proclaimed “super-paranoid mom” says she’s become more outspoken about since having kids — issues like gun control and black lives matter. She wants her kids to grow up with the core principles of kindness and family, and to know that they can do anything they want — a lesson she learned from her father.

As she puts it, “Be you. Be confident within you. Be happy. No hate. Spread love.”

Do you consider yourself a feminist? Share with us over @BritandCo!

Sarah James
With an MFA in Costume Design and a website dedicated to sous vide cooking, Sarah's been in the DIY space since long before it was cool. She was the Food + Living editor for Instructables.com where she produced three books including How to Do Absolutely Everything, and the Think Tank director at Betabrand where she designed the bestselling Dress Pant Yoga Pants. Sarah also worked as a make-up artist for Blue Man Group and has built costumes for film, theater and dance.
Feminism
Celebrity News
Feminism Kardashians
More From Celebrity News