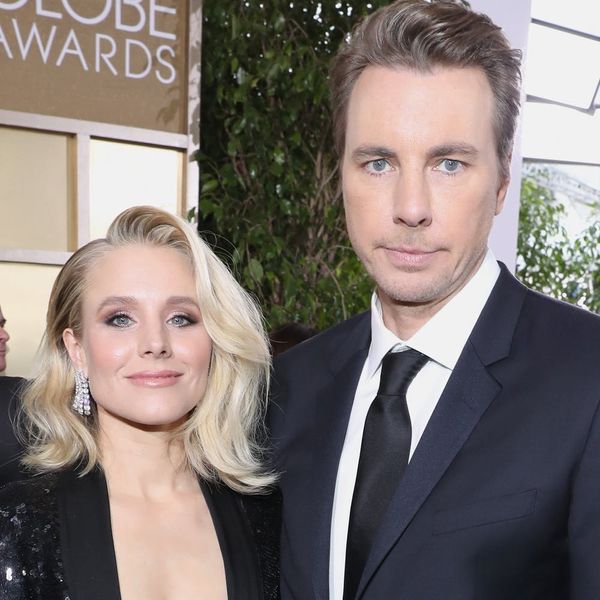 Last year, it was all about Taylor Swift and her squad (and then BF, Tom Hiddleston)’s epic Fourth of July-themed bash, but Kristen Bell and Dax Shepard are offering up some stiff competition for 2017, showing us their American pride in a pair of matching flag-striped “jammies.” Kristen Cavallari and Eva Longoria are also tipping their hats to the good ol’ US of A with some seriously festive treats, while Kirsten Dunst celebrates overseas. Check out all the star celebrations happening below!

Been making this cake with my mom since I was a little girl. Had the boys decorate the cake to carry on the tradition #Happy4th #AmericanFlagCake

2. Kristin Cavallari: The newly transplanted designer got her bake on for the the Fourth, showing off a patriotic fruit cake with a special story behind it. “Been making this cake with my mom since I was a little girl. Had the boys decorate the cake to carry on the tradition,” she wrote. Awww!

3. Kirsten Dunst: Kiki may be overseas in Paris, but she’s still an American at heart, wishing her country a happy Fourth with a miniature flag in her coffee this a.m.

Happy Independence Day , America! Once again thank you to all who fought to this make day possible and who are still fighting for us today. Be safe and please remember to leave your animals indoors tonight . Fireworks can be scary! 🎉💥⚡️ 🇺🇸 @the_pet_handler

4. Kaley Cuoco:The Big Bang Theory star showed her pride off with her pooches’ bows, saying, “Once again, thank you to all who fought to make this day possible and who are still fighting for us today.” She also gave us an important reminder, saying, “Be safe and please remember to leave your animals indoors tonight. Fireworks can be scary!”

4th is July DIY crafts with the nuggets 🇺🇸🙋🏽❤ http://bit.ly/2sdGR0y

5. Nicole “Snooki” LaValle: The reality star formerly known as Snooki got her craft on with her daughter, Giovanna, and pal JWoww and her daughter, Meilani. “I’d rather be down at the shore,” LaValle admits. “D-R-U-N-K!”

So excited for the 4th! Who else is rockin' their #ReefEscape's tomorrow?! @reef_girls ❤🇺🇸💙

6. Hailee Steinfeld: Steinfeld prepped her Fourth of July footwear, saying, “So excited for the 4th! Who else is rocking their #ReefEscapes tomorrow?”

7. Karlie Kloss: Newly ice blonde Karlie Kloss gave us her best Fourth throwback, and with a rocket in the background, we’ve gotta say, girl nailed it.

I NEED YOU!!! Starting in ONE HOUR please grab your phone, look right into the camera, tell us you name and location and film your self answering these questions... What does the USA mean to you? What does the American dream mean to you? What's the state of the country today? What are your greatest fears? What are your hopes and dreams? #ADayInTheLifeOfAmerica Thx!!! 🎆🙏🏼🌅💪🏻🇺🇸🕺🏻👍🏼

8. Jared Leto: The 30 Seconds to Mars frontman enjoyed time out on the water with an American flag at his back.

9. Eva Longoria: Longoria lamented her festive (and caloric!) BBQ spread, saying, “Why must we always celebrate with calories?”

10. Jordana Brewster: The Fast and Furious star waved hello with a mini flag and an adorable filter.

Life, liberty, and the pursuit of Happiness!! Happy 4 th to all! With love ❤️

12.Ryan Seacrest: The talk show vet and his co-host, Kelly Ripa, were decked out in red, white, and blue from head to toe (as was guest Andy Cohen).

13. Kate Upton: Supermodel Kate Upton made our country’s colors look ultra-chic, saying, “You know you nailed the holiday when you show up wearing a flag.” TRUTH!

15. Christina Aguilera: What was that Kate Upton said about showing up wearing a flag? Xtina’s whole fam got in on the holiday fun down by the water’s edge with flags galore, hers being the biggest of all.

#happy4th. Here's to freedom and independence for all, now more than ever, for all.

16. Laverne Cox: Cox took the liberty (pun intended) of dressing up as Lady Liberty herself. “Here’s to freedom and independence, now more than ever, for all,” she wrote.

17. Paris Hilton: What’s red, white, and blue all over? A bikini-clad Paris Hilton on the Fourth of July.

What are you doing for the Fourth? Tell us your plans over @BritandCo.

Nicole Briese
Nicole is the weekend editor for Brit + Co who loves bringing you all the latest buzz. When she's not busy typing away into the wee hours, you can usually find her canoodling with her fur babies, rooting around in a bookstore, or rocking out at a concert of some sort (Guns N' Roses forever!). Check out all her latest musings and past work at nicolebjean.com.
4th of July
Celebrity News
4th of July Instagram social media
More From Celebrity News